Both major parties have slipped in polls taken in the wake of the launch of Nicky Hager's book Dirty Politics. National has slid below 50% to 49.1%, and in a TV3 poll John Key's rating as preferred Prime Minister slipped a bit to 41%. Labour is back down to 25.5%, after briefly crawling over 26%.

(Explainer: The POLL of POLLS is an arithmetical average of the four most recent major polls since mid-June, from among the following: TV1 Colmar Brunton, TV3 Reid Research, Fairfax Media-Ipsos, NZ Herald DigiPoll, Roy Morgan New Zealand (up to June only one of its two-a-month was included) and UMR Research, which is not published.*)

These figures come with a caution: Of the four polls in the latest mix, two were by New Zealand Herald DigiPoll. The first of those two will drop out of the most recent average when TV1 reports its latest poll over the weekend.

National's slip leaves it still strong but also underlines the fact that it does not have the election in the bag.

But its problems are slight compared with Labour's. Its latest average is below its 2011 election score of 27.5% and far below the 33.0% average at the end of 2013. To make matters worse, a Reid Research poll for Native Affairs on Maori TV showed the Maori party's Chris McKenzie ahead in Te Tai Hauauru.

The Greens continued to be steady. Their latest four-poll average was 12.6%, which would net it 16 seats. 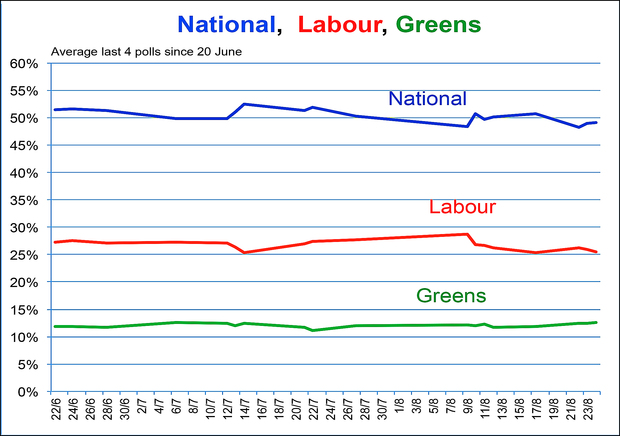 Put Labour and the Greens together and their latest total was 38.1%. That trails National by 11%. 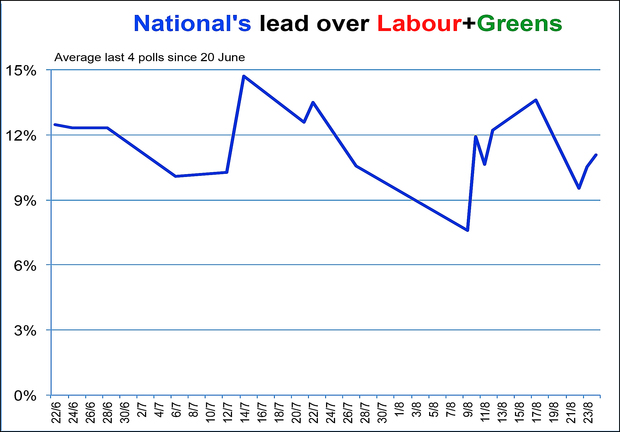 National's fall puts the focus on the smaller parties. New Zealand First has climbed to the 5% party vote threshold. The Conservatives have done best in the wake of the Hager book. Their latest average was 3.3%. Internet Mana was 2.5%, the Maori party 0.8%, ACT 0.5% and United Future 0.3%. 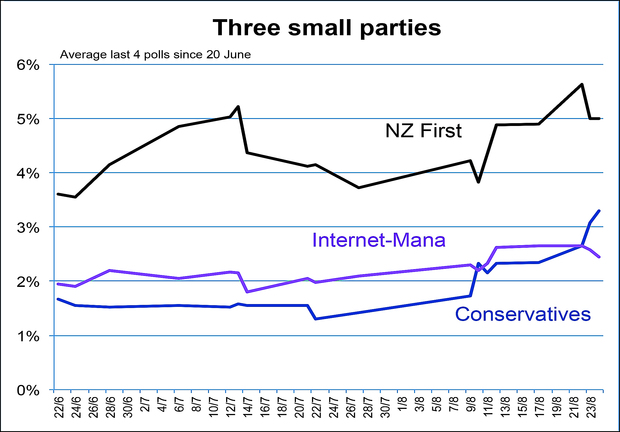 The next Roy Morgan poll is expected next week. So its strong reading that the country is on the right track is unchanged. 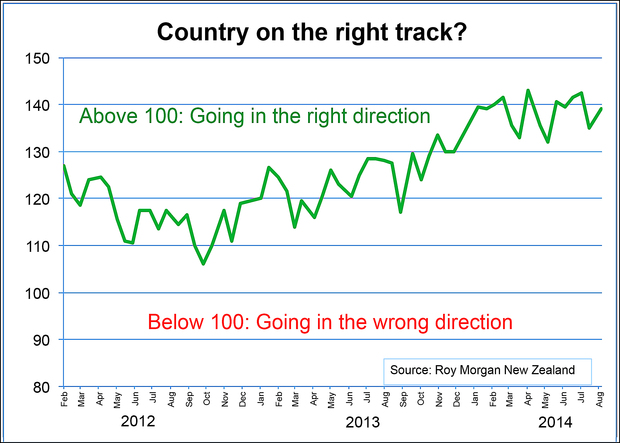 (*The four polls included in the latest average were, in date order of the midpoint between the start and finish of voter interviews: NZ Herald DigiPoll, TV3 Reid Research, Fairfax Media-Ipsos and NZ Herald DigiPoll. The poll on whether the country is going in the right or wrong direction is from Roy Morgan New Zealand.)