Hundreds of Ngāpuhi people have turned out for a hui in Waitangi at the invitation of the new Minister for Treaty Negotiations, Andrew Little.

Today more than 400 Ngapuhi people have packed the Waitaha Hall at Waitangi to welcome Mr Little and tell him what matters to them. 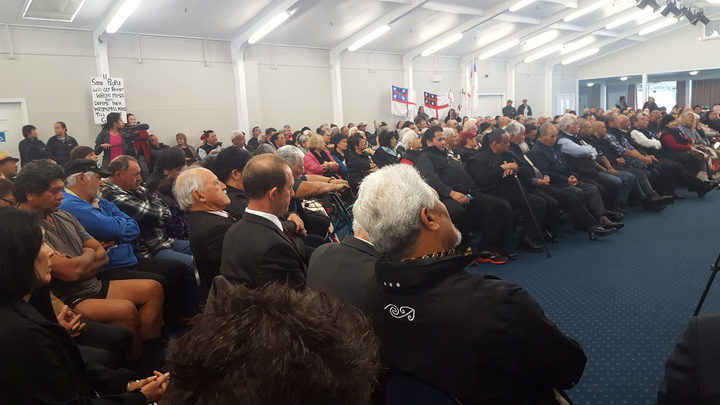 Some have poured their hearts out about the land loss and poverty their people have suffered and their hopes of redress, through a Treaty settlement.

Speakers have repeatedly stressed the need to focus a settlement on hapū and many have said they support the Maranga Mai plan to fix the controversial Tuhoronuku mandate.

The mood has been lively but cordial - and Mr Little has been given a new name - on Ngapuhi turf he's now Anaru Iti.

Yesterday, a South Island member of the Ngāpuhi mandate authority had a personal meeting with Mr Little after he was excluded from the official one.

Erin Shanks was ejected from the meeting between Tuhoronuku and Mr Little by the chair, Hone Sadler before it got underway.

Mr Little had invited both parties in the iwi's mandate dispute to meet him in Waitangi.

After meeting a large contingent from the hapū alliance Te Kotahitanga in the morning, the Minister met a small group from Tuhoronuku in the afternoon.

Mr Shanks said the chairman had not passed on the Minister's invitation to the other board members but he heard about it and paid for his own flight from Christchurch to be there.

He said Mr Sadler told him the meeting was for the executive only and he had to leave.

"The invitation was an open one for all members, but it's clear the chair and ex-chair Sonny Tau wanted to keep it down to just a small clique," he said.

"They threatened to cancel the meeting if I stayed," he said.

Mr Shanks is Tuhoronuku's Audit and Risk trustee on the board.

Another hapū rep who had turned up, Tai Harawira was also excluded.

Crown officials came to a compromise offering Mr Shanks a private meeting with Mr Little following the board meeting.

Mr Shanks said he had filled Mr Little in on what had been happening with Tuhoronuku and given him the views of South Island Ngāpuhi on the stalled settlement talks.

A large hui in Christchurch recently voted in favour of going ahead with the Maranga Mai plan, setting up a new mandate authority, and phasing out Tūhoronuku.

Tuhoronuku is objecting to the plan saying it fails to represent urban Ngāpuhi.

But Mr Shanks said urban Maori in the south are satisfied Maranga Mai will represent their interests.

He said the episode yesterday was disappointing.

"Tuhoronuku is supposed to represent hapū - but they're already short of five members who've resigned over their refusal to accept change," he said.

"This latest behaviour is a pretty clear demonstration of what the problem with the mandate really is," he said.