The night before Martin Guptill made history, he received a text from Martin Crowe.

The man who has struggled for consistency for almost two years, whose place in the XI was questioned as recently as last month, did one better - he hit the roof. 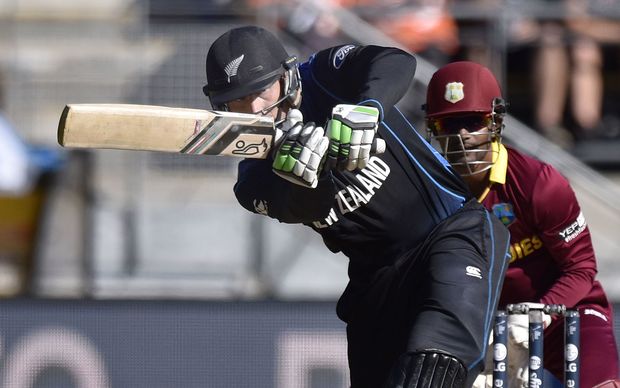 Macca only did it once at the Cake Tin, he later explained - I've done it twice.

The records speak for themselves - the second highest one day international score ever, the highest World Cup score ever, the sixth double-century ever - on the biggest of stages.

When the West Indies' master of cool, Chris Gayle, hit 215 against Zimbabwe earlier in the tournament, history was rewritten.

Less than a month later, Gayle was on hand to congratulate the man who trumped him.

"Welcome to the club," he said.

Guptill already owned the highest ODI score by a New Zealander - his 189 not out against England in 2013.

But a fine century against India at Eden Park aside, he has since faltered.

Since that glorious innings in Southampton, he has averaged less than 30 in all formats, and spent time away from the game recovering from ankle surgery.

During the Black Caps' never-ending seven match warm-up series against Sri Lanka he passed 50 once and claimed three inglorious ducks - two of them golden.

At almost every media standup and press conference, his coach, Mike Hesson, batted away questions about Guptill's form.

Should he be dropped? We know he's a quality player and he'll come good, Hesson said.

Guptill has worked tirelessly with the eternal Martin Crowe over the past year to fix whatever was broken. Telling him to play straighter, move your feet, pick the right deliveries to hit.

In a tournament where the Black Caps' bowling has earned most of the plaudits, Guptill surreptitiously entered yesterday's quarter-final as the side's top run-scorer, mainly thanks to a shackle-breaking 105 against Bangladesh last week.

He was yesterday dropped third ball by Marlon Samuels - has there ever been a more costly mistake? 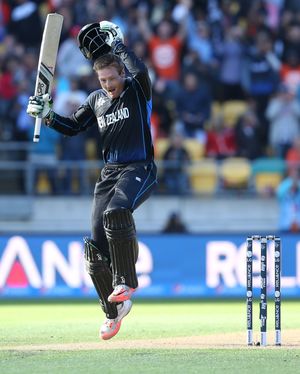 His first three boundaries were, as Crowe would have prescribed, hit with a straight bat down the ground.

He soon looked at ease.

When Guptill's fearless partner, New Zealand skipper Brendon McCullum, fell for 12 in the fifth over, the New Zealand support shuffled uncomfortably in their seats.

A succession of second bananas came and went - Kane Williamson hit 33 at almost a run-a-ball, Ross Taylor stuck around for a vital 42, and birthday-boy, or man (he's now 36), Grant Elliott smashed 27 off 11.

Guptill hit almost every kind of shot in the book - he drove, he pulled, he stood tall and swiped.

When his 200 came up, the capital's roar was deafening.

"It's pretty cool. I've never heard anything like that before," Guptill later said.

Soon after came the shot of the match; of the tournament.

There were other great moments yesterday - Trent Boult continuing his fine tournament with four-for and Daniel Vettori's Michael Jordan-esque leaping catch - but it was Guptill's day.

But that comes later.

After carrying his bat - facing the first and last balls - Guptill reverted to his understated self.

"I am incredibly proud of what happened today and hopefully moving forward we can win another game and then another one after that," he said.

Leave it to the master of blunt force, McCullum, to put some appropriate context to the innings.

"I will never forget it. The innings we witnessed is probably one of the best we have seen in this format."