The Wellington region moved to alert level 2 at 6pm today after an Australian tourist who visited the capital on the weekend tested positive for Covid-19 on his return to Sydney. 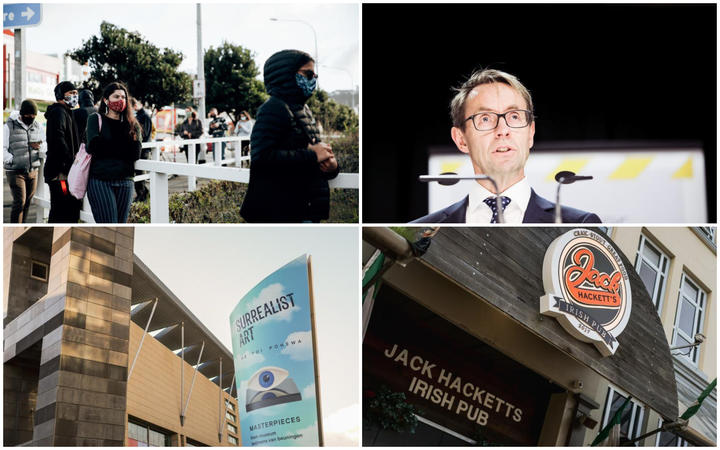 Wellington, Wairarapa and Kāpiti Coast are now at alert level 2 until 11.59pm on Sunday but the rest of the country remains at alert level 1. Cabinet is expected to review the alert level settings again on Sunday.

The Sydney man and his partner flew into Wellington on flight QF163 arriving in the capital shortly after midnight on Saturday and returned to Sydney at 10.13am on Monday.

Covid-19 Response Minister Chris Hipkins said in a briefing this afternoon the man worked at a healthcare centre in Bondi where a positive Covid-19 case was seen and the information suggests that it is likely he was infected before travelling to New Zealand.

The man had one dose of AstraZeneca vaccine about 10 weeks ago and thoroughly used the Covid Tracer App while in New Zealand, Hipkins said.

When the person left Sydney there were only four community cases of the virus, though that had since grown significantly. Because of the links to Bondi, New Zealand officials are working under the assumption they have the Delta variant.

Quarantine-free travel with New South Wales had already been paused at 11.59pm last night, for at least 72 hours, but that was before officials were notified about the positive case.

Alert level 2 means people can go to school and work but should follow public health measures and considers others around them.

The Ministry of Health advises people who have been at locations of interest in Wellington to call Healthline, but this afternoon an answering machine stated that due to "exceptional call volumes" the call could not be answered telling callers that further information was available online.

People on social media have been complaining about extremely long wait times if they do get through.

A central Wellington Covid-19 testing site in Taranaki Street this afternoon prioritised people with symptoms or who had been at locations of interest today.

At times today there were up to 100 people queuing from Taranaki Street around the corner onto Arthur Street, and dozens of cars were driving through the testing clinic. Many were being turned away if they hadn't booked a time to be tested, and were handed information to call Healthline by the staff managing the site.

This evening Capital and Coast District Health Board (DHB) confirmed the centre was already fully booked for tomorrow, though other centres will be available.

A new testing centre opened at Hataitai Park Netball courts this afternoon and the DHB said testing was still available there tomorrow, as well as at primary care facilities.

A GP clinic testing in Karori said it had done about 10 times its usual number of tests.

The Ministry of Health issued a list of locations visited by the tourist on Saturday and Sunday.

People who visited some locations are being advised to get a test immediately and self isolate for the full 14 days.

That includes the 600 people who visited the Surrealist Exhibition at Te Papa Tongarewa from 4pm to 5.45pm on Saturday 19 June. The national museum closed for a deep clean and up to 2500 visitors and staff may be required to isolate.

Whitby Collegiate School closed for the remainder of the week as a precaution after holding its senior school ball at Te Papa on Saturday night. Eight of its staff were there to set up for the ball at the same time as the new case visited, and their absence would also mean reduced staffing.

People who visited Jack Hackett's Irish Bar on the corner of Taranaki Street and Inglewood Place on 19 June between 8.45pm and 12am are also being advised to get a test immediately and self isolate for the full 14 days.

The list includes Wellington restaurants and cafes Floridita's, Lido, Pickle & Pie, One Red Dog and Highwater Eatery at certain times on either Saturday or Sunday.

The tourist stayed at the Rydges Hotel in Featherston Street which is also on the ministry's list.

Four close contacts of the person have been identified, two are in Palmerston North and two are in Tauranga. All four are isolating and returned negative initial Covid-19 tests today.

Some 58 passengers who came into New Zealand from Sydney early on Saturday morning are considered close contacts and will have been contacted, Director-General of Health Ashley Bloomfield said. They would all have been notified last night and will be ringing Healthline directly.

Updates on the locations of interest are on the Ministry of Health website here.