A pause has been placed on the travel bubble between New Zealand and New South Wales. 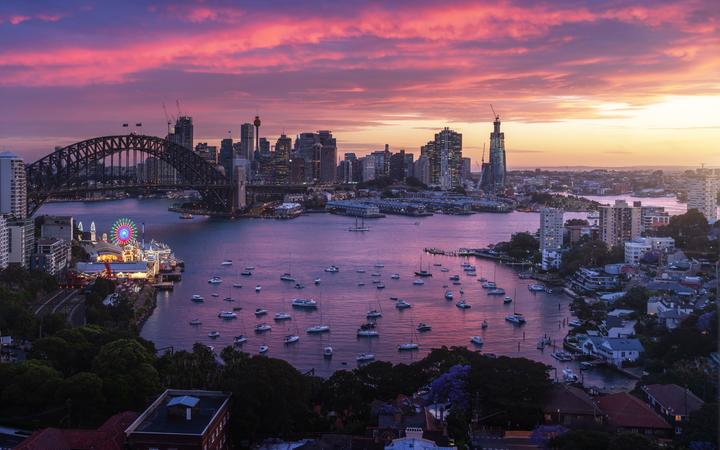 Quarantine-free travel from New South Wales to New Zealand has been paused from midnight, and the hold will be in place for at least 72 hours.

The minister for the Covid-19 response, Chris Hipkins said there were 10 new community cases of the virus in Sydney, and the source of those infections needed to be thoroughly investigated before travel resumed.

He said a public health assessment had determined the risk to the New Zealand public remains low, but there are still several unknowns.

The government was taking a precautionary approach and the decision would be reviewed on Thursday, Hipkins said.

Quarantine-Free Travel from New South Wales to New Zealand will be paused for 72 hours from 11.59pm tonight (New Zealand time). As with previous pauses, it will be under constant review. pic.twitter.com/yLDTmYi3uY

Air New Zealand said the pause on quarantine free travel from Sydney meant 28 flights were cancelled over the next 72 hours.

It was contacting affected passengers and giving them the option to rebook, put their flight into credit, or get a refund if they purchased a refundable ticket.

Leading epidemiologist Michael Baker said the decision to pause the travel bubble was not a surprise after today's update from NSW authorities.

"I think a number of factors that have been identified by the government have really tipped the country in favour of the suspension, and that is the fact that there's two cases where the source is not known, they've been in the community and there could be other cases linked to them - and also of course, it's the more infectious Delta variant."

Professor Baker said the new strain is about twice as infectious as the original and was proving harder for countries to keep under control.

Anyone who had been in Sydney since 11 June should keep doing regular checks on updates being posted on the NSW Health website, as new locations of risk were still being added, a NZ government Unite Against Covid-19 alert said.

People who had been at the locations of interest during the times listed should call Healthline, and isolate themselves until they can be tested for Covid-19 and then return a negative result.

They would also not be allowed to travel to New Zealand within 14 days of being at any of the at risk locations of interest, even if the travel bubble is restored.

While the overall risk to health for New Zealand currently remains low, the assessment found several unknowns had arisen, including the rising number of locations of interest in the community visited by people who later tested positive, and people not linked to other cases.

The NSW cluster now has 21 cases linked to it.

Today, the state's health authorities announced extended restrictions to respond to the increase in cases, including wider rules for mask use, and continuing restrictions on indoor venues.

At least six of the new NSW cases were household contacts of previous cases who had been in isolation.

Among the new cases was a primary school-aged pupil who has not been linked to a known cluster. They are a student at St Charles Catholic Primary School in Waverley, in Sydney's eastern suburbs.

At least 16 people who have since travelled to New Zealand have reported that they were at some of the locations of interest in Sydney.

Quarantine-free travel from Victoria to New Zealand is scheduled to resume overnight, at 11.59pm .

That pause was put in place on 25 May, and extended several times, due to a cluster of community Delta variant cases in the State.