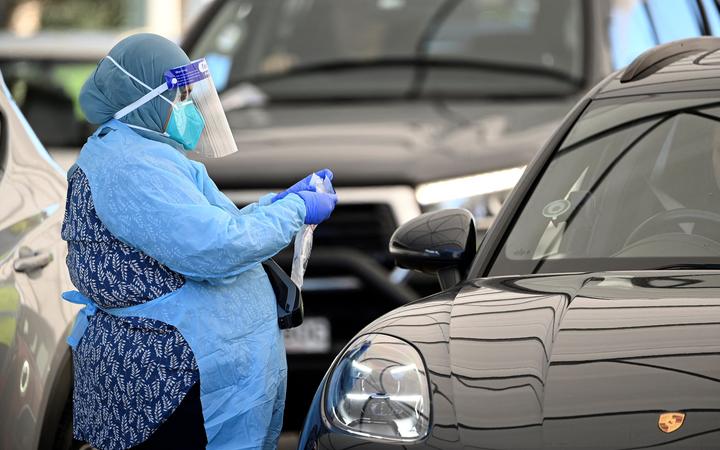 A health worker registers a resident at a Covid-19 drive-through testing site on Bondi Beach in Sydney on 17 June, 2021. Photo: AFP / Saeed Khan

Seven of the infections were detected outside of the reporting period and will be included in tomorrow's figures.

Three new cases were recorded before the 8pm reporting cut-off, in addition to two infections that were announced yesterday.

The latest surge in cases has led NSW Premier Gladys Berejiklian to extend the state's mask mandate for all indoor public venues to midnight next Wednesday, 30 June.

"We will extend it to all of Greater Sydney... excluding the Central Coast and the Hunter," she said.

The Premier said the local government areas of Wollongong and Shellharbour, which had compulsory masks for public transport, would be subjected to the same mask rules as Sydneysiders.

Both were close contacts of previously reported cases and have been in isolation.

The third is a woman in her 20s from Sydney's eastern suburbs.

NSW Health said she was linked to the Bondi cluster but further investigations were under way.

Of the seven cases outside the reporting period, six were household contacts of previous cases who had been in isolation.

The seventh case was a student at St Charles Catholic Primary School in Waverley, in Sydney's eastern suburbs.

Berejiklian ruled out any further restrictions for the time being.

"At this stage, we feel the response we are having as proportionate," Berejiklian said.

"We did predict and assume that all household contacts, in fact, one [entire] family - parents and four children - managed to contract the disease.

"We anticipate in coming days ... those in isolation with a household contact are likely to develop the disease given how contagious it is."

The Westfield Bondi Junction shopping centre continues to be the main area of concern to health authorities.

Previously, anyone who was in the complex, including the car park, on 12 or 13 June was told to get tested, but now anyone who was there from 14 to 18 June must also be swabbed.

New Zealand health authorities have also urged travellers from the state who have been to a location of interest to isolate and get tested.

Some 16 contacts had been identified in New Zealand as being at locations of interest in Sydney.

Queensland detects one case with link

Queensland has recorded one new locally acquired case of Covid-19 linked to a woman who tested positive for the virus at the weekend after undergoing hotel quarantine.

The man in his 60s visited the Portuguese Family Centre at Ellen Grove at the same time as the woman while she was infectious after travelling to Australia from Portugal.

Chief Health Officer Jeannette Young said all 36 people who were at the Portuguese restaurant at the same time as the infected woman were also now in home quarantine.

"We will continue, of course, to assess them and to test them going forward for the 14 days," she said.

Dr Young said authorities were continuing to investigate how the woman became infected while in hotel quarantine.

"We have found that there was one of the quarantine staff, we think, potentially involved," she said.

"We know that this staff member escorted one of the positive cases from Mongolia from their room to the ambulance so they could be transported to hospital, and we have the genome sequence from that gentleman.

"We then know that the staff member, after escorting that gentleman to the ambulance, went up to a higher level in the building and swabbed the lady who came from Portugal.

"The lady from Portugal has then ended up with exactly the same virus as the gentleman from Mongolia."

Dr Young said both the staff member and the man from Mongolia were fully vaccinated.

She said health authorities were reviewing CCTV footage from the hotel.

Victoria has recorded no new local coronavirus cases as the state plans to ease restrictions again from Friday, ahead of the school holidays.

It is the sixth consecutive day the state has recorded one or fewer new local cases, and no new exposure sites have been listed since last Wednesday.

South Australia and Queensland have both announced they will reopen their borders to Victoria from Friday.

Last night, New Zealand also confirmed that it would resume its quarantine-free travel with Victoria tonight.