The Wellington region will move to alert level 2 from 6pm tonight until 11.59pm on Sunday.

The announcement comes after a person who travelled from Sydney to Wellington tested positive for the virus upon their return.

The person was in Wellington from 19 June until 21 June.

The rest of New Zealand will remain at alert level 1.

"We just held a special meeting and out of an abundance of caution the Wellington region will move to alert level 2 from 6pm tonight and that will run through at this point until 11.59pm on Sunday," Hipkins says.

Travel is not restricted under alert level 2, but anyone who has been in the Wellington region over the weekend should keep alert level 2 behaviours if they go elsewhere.

"I want to reiterate that these are precautionary measures ... first and foremost we want to ensure that New Zealanders are not exposed to Covid-19." 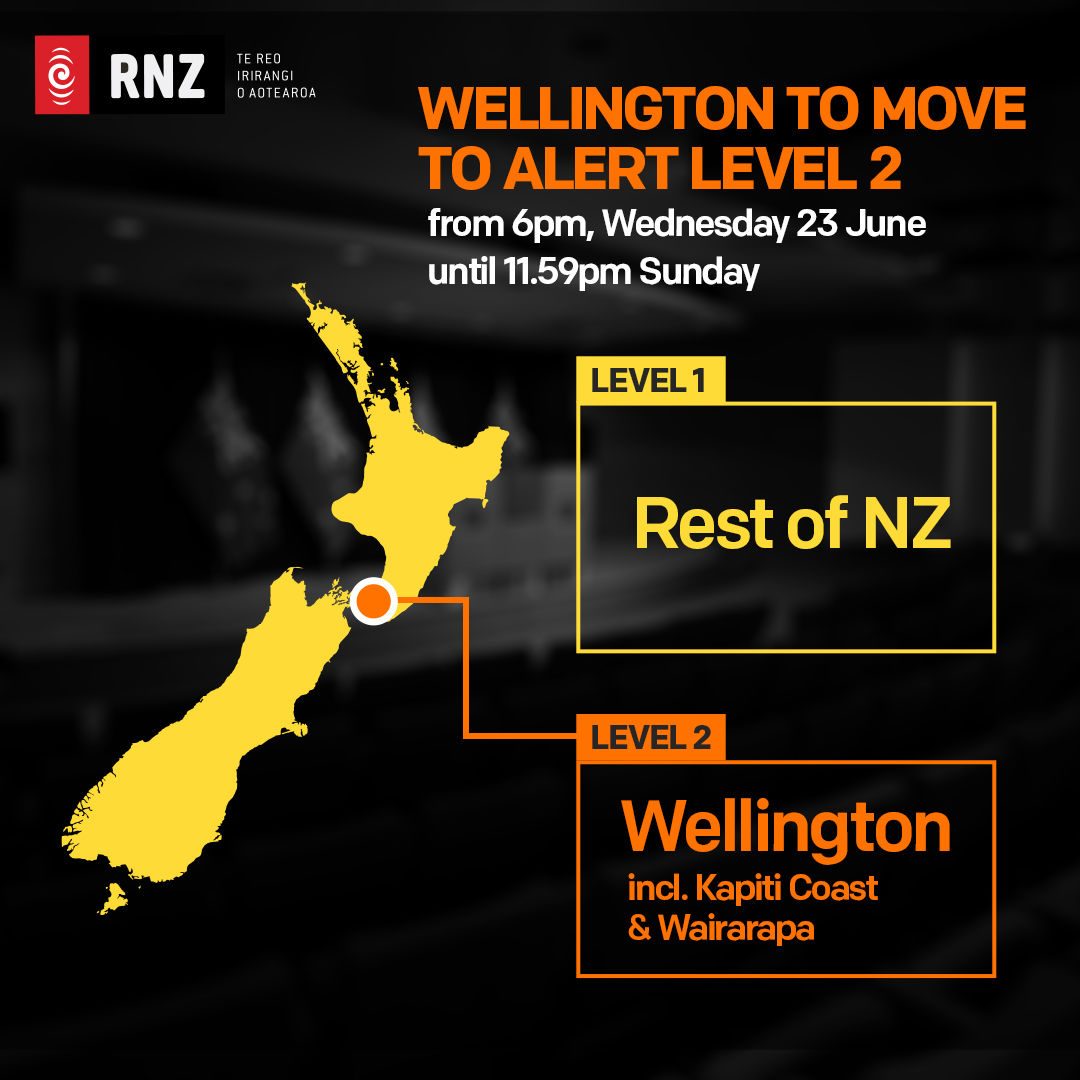 On the person in question, Hipkins says they were likely to have been infected before they travelled to New Zealand.

"I do want to reassure New Zealanders that we've always had plans in place for situations like this and that is what we are working through now. Our contact tracers have been working at pace and they have been since we were first notified of this case last night."

He says the case, who has since returned to Sydney was spoken to last night and again early this morning. Their four close contacts were notified last night.

He also says the decision to pause travel with New South wales was made before New Zealand officials were notified of the case. When the case left Sydney there were just four cases there, though that number has since grown significantly.

The person has had the first dose of a vaccine about 10 weeks ago and thoroughly used the Covid-19 Tracer app while visiting in New Zealand.

"Our hope is that many people who visited those venues that are locations of interest have also been using the app ... however that is complementary to the information that we have put out on our website."

He says the ministry feels confident they have identified all the locations of interest, but more information will be provided about specific locations at Wellington airport after CCTV has been assessed.

Two of the person's four contacts are located in Palmerston North, and the other two are in Tauranga. Those in Tauranga had a much more fleeting interaction with the case. All four are isolating.

Some 58 passengers who came into New Zealand from Sydney early on Saturday morning are considered close contacts and will have been contacted, Bloomfield says. They would all have been notified last night and will be ringing Healthline directly.

Bloomfield says he encourages Wellingtonians and others who have been in Wellington over the weekend to check the places in the locations of interest. Some people will be required to isolate for the full 14 days.

The case stayed at Rydges Hotel in Featherston Street and spent the weekend in tourist and other places around Wellington, and dining in the central city. Some of those who were on the return flight to Sydney have since returned to New Zealand and are also being contacted.

The person returned to Sydney on Monday at 10.13am.

Bloomfield had said a testing site would be available at ASB Sport Centre in Kilbirnie, but officials later made clear it would be at Hataitai Park Netball Courts instead.

Sewage testing samples have been taken at the Moa Point site yesterday and results should be available tomorrow.

About 5900 tests were processed yesterday, and about 470,000 scans with the app. "We want and need that number to increase," Bloomfield says.

Government MPs and ministers will not be participating in large gatherings over 100 people anywhere in the country, Hipkins says.

Parliament will continue to sit today but under alert level 2 conditions. And extra safety measures have been put in place around the Parliament buildings for alert level 2.

Hipkins says this is a very cautious approach in moving to alert level 2 and authorities will be leaning heavily on contact tracing systems to identify any potential cases.

"If we start seeing additional cases coming up that we haven't identified through our contact tracing that's the sort of environment in which we would reconsider if any further changes might be required."

The information published about locations of interest, put out just before 9am, was published as soon as it was available, he says, and he believes it would not be fair to categorise the reaction as sluggish.

Bloomfield says the place where the Covid-19 positive traveller works had not been identified as a location of interest by the time they travelled to New Zealand. But there has subsequently been another case linked to it.

He says there's no information to suggest they breached the rules of the bubble.

Hipkins says it was the emergence of cases in NSW yesterday that did not have a clear link to the other cases that prompted him to pause the quarantine free travel bubble.

He says cases will pop up from time to time either in Australia or New Zealand. "That's the nature of Covid-19."

Bloomfield says he does not yet have more detail about the person's visit to a chemist, but the person became aware of symptom onset - quite clearly in their mind - about 3am on Monday.

He says they don't know yet about how the person travelled around the city.

He also doesn't know how many people were in the pub on Saturday night, when the Super Rugby final was on, but he expects it may have been quite full.

"We are expecting to get some bigger deliveries of the vaccine in July which we have canvassed before."

There will be some unevenness in how those groups are being counted, Hipkins says.

He says the workforce for scaling up vaccinations in Wellington is the same as for scaling up testing, so they are limited, and at this point they will not be pulling staff from other regions

Hipkins says they started having conversations about pausing the bubble yesterday afternoon and made the decision about 5pm. Bloomfield alerted Hipkins to "information about a case" about 8.30pm via text message.

No decisions have been made about Prime Minister Jacinda Ardern's planned trip to Australia at this point.

Hipkins says pre-departure testing may be brought in for NSW when travel starts between the state and New Zealand but the decision has not been made yet.

He says the Cabinet has not yet reviewed the alert levels in respect of new variants.

People who have been at these locations at the relevant time should immediately isolate at their home or accommodation and call Healthline on 0800 358 5453 for advice on testing.