The move was announced by Prime Minister Jacinda Ardern tonight after three members of a family living in the South Auckland suburb of Papatoetoe tested positive for Covid-19.

They are the country's first cases of community transmission since late January when a returned traveller in Northland tested positive after leaving quarantine.

Ardern said the alert change came out of an abundance of caution and would be reviewed every 24 hours.

"Three days should give us enough time to gather further information, undertake large scale testing and establish if there has been wider community transmission," Ardern said.

"I think it is an example of how tricky Covid-19 has always been."

She said it was a "good, timely reminder too, to everyone, please turn on the Bluetooth function and keep scanning".

Cabinet weighed up many factors and decided moving the country up alert levels was the necessary response, she said.

"Cabinet's plan is based on the best science and what we know works from previous cases here and responses overseas. "

The prime minister has assured the public that the vaccine programme would not slow down because of the level changes.

Cabinet's next decision will be announced tomorrow at 4pm.

Level 3 means Aucklanders will need to stay home. They should also work from home if possible.

If they venture out, Aucklanders must maintain 2m distance.

Schools and early childhood centres will stay open for children of essential workers.

"No need to rush out this evening to any of these places. But we are again asking all other businesses that usually interact face to face with customers to move to non-contact methods - click and collect, or online ordering.

"The main rule here is maintaining physical distancing between staff and not physically interacting with customers."

Despite Ardern's advice, there were long queues at some Auckland supermarkets this evening, and some shelves were being emptied of essential items. 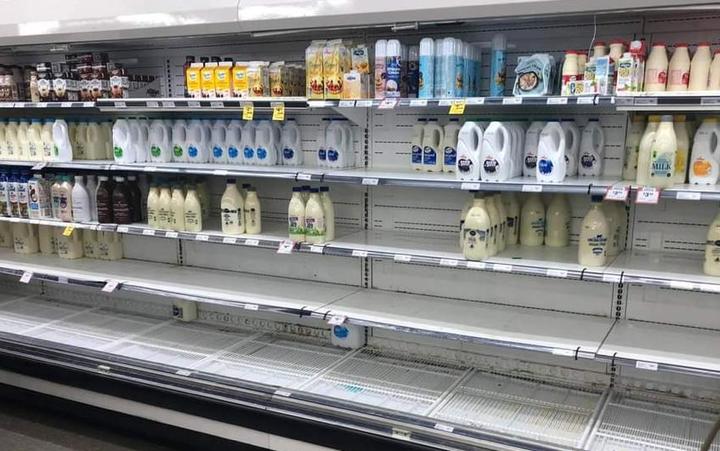 Empty shelves at an Auckland Countdown shortly after it was announced the city was moving to alert level 3 Photo: SUPPLIED

Gatherings outside of your bubble are prohibited, with exceptions for funerals and weddings which are limited to 10 people. However, Ardern encouraged people to postpone these events if possible.

"If you are in Auckland we ask that you use a face covering if you need to leave your home," Ardern said.

A border will be put in place in Auckland. Those who need to travel through the border can apply for an exemption.

Police say they will re-establish road checkpoints in and out of the Auckland region for the next three days.

Eight checkpoints on the outskirts of Auckland will stop vehicles and question drivers, ensuring there is no non-essential movement through the region.

They say anyone attempting to travel across the regional boundaries should expect to be stopped and asked for proof of essential travel.

She explained that people who live in Auckland but are currently away, can return; and anyone who's in Auckland now but does not live there, can leave.

People transiting through the region will be allowed to do so, and those who live just outside Auckland but need to enter for legitimate reasons, will also get through the border checkpoints.

Air New Zealand said in a statement it had made a number of changes to its services.

From tomorrow, the airline's Auckland lounges and valet parking will close.

"Due to capacity restrictions under alert level 2, the maximum number of people able to access the airline's lounges in other regions is capped at 100," the statement said.

Its front-line crew will be wearing masks and gloves and passengers are also required to wear face coverings onboard.

The airline said it will waive fare differences for customers with bookings between Monday and Sunday who wish to rebook before 7 March. People with bookings for domestic flights scheduled to depart up until 30 March can also opt for credit.

Level 2 for the rest of the country means businesses and schools remain open, but with social distancing.

People are encouraged to practice good hygiene, keep track of where they have been and stay home if they are unwell.

People are asked to maintain a distance of 2m from others in public spaces and in retail stores.

In other places like workplaces, cafes, restaurants and gyms, people must stay 1m apart.

Hospitality businesses must keep groups of customers separated, seated, and served by a single person with a maximum of 100 people at a time.

Masks are mandatory on public transport and encouraged where physical distancing is not possible.

Gatherings, including weddings and funerals, are limited to 100 people.