Cabinet will meet again on Monday to decide if gatherings in Auckland can be increased and whether or not the rest of the country can move to alert level 1.

"On the advice of the director-general, Cabinet has decided on a short extension to the current restrictions of alert level 2.5 for Auckland and level 2 for the rest of the country."

For Auckland, Cabinet will review the current level at a meeting on Monday 21 September with a view to increase gathering limits, depending on whether the cluster is contained.

If that change is agreed on, it will come into force on 23 September, Ardern says.

She says on Monday 21 September, Cabinet has agreed in principle that the rest of New Zealand will move to alert level 1 - contingent on cases tracking the way they are. The move will be confirmed on Monday.

The level 2 precautions continue to act as a safety barrier against flare-ups for the rest of New Zealand, she says.

She says it has been two weeks - one transmission cycle of the virus - since Auckland moved to level 2.5.

"In that time, we have identified a further 36 cases in the community - all are associated with the wider Auckland cluster and most were people who had a known link to the cluster and so were already isolated."

Ardern announced physical distancing requirements on planes and public transport will be eased from today.

"From today, public transport operators, including airlines, buses and trains, do not need to maintain any seating restrictions or passenger capacity limits at level 2. Mask use will continue to be compulsory [on public transport at level 2 and higher]."

On travelling and airport safety, Ardern says "what we want to see maintained by our airlines is enforcement of mask use because that has been a key part of the director-general's decision and advice ... what we want to see is that when we're loading passengers, making sure we're maintaining physical distancing for loading and disembarkation because that's where you start to see congestion."

"It was his recommendation. Clearly over time the advice in this area has evolved, where originally we were very focused on physical distancing, then when masks came along we [were] told we needed to keep both of them in play. The compliance with mask wearing has been excellent and the director-general's advice has evolved to now say he believes we can move forward," he said.

"He has worked closely with Air New Zealand around their overall health and safety and making sure that they are doing all the right things to assure that safety, so this was in fact exactly his advice." 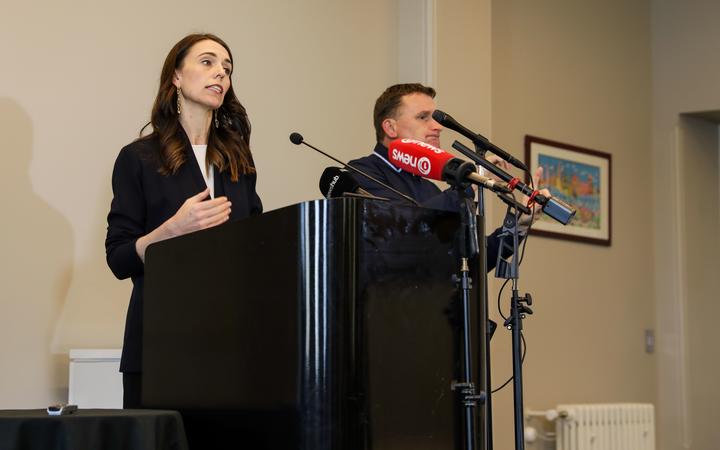 Ardern says Treasury's latest update shows economic activity across the Auckland region and the country bounced back to levels experienced under level 1.

"This is a global pandemic and the global economic outlook is weak.

"The best approach to a healthy economy is getting the virus under control.

"Continuing our elimination strategy based on stronger more targeted public health measures allows economic activity in New Zealand to resume sooner than would otherwise be the case."

She says the plan is working but just needs "a little more time".

"My view is that we need to keep all of New Zealand safe. Modelling suggest there still is a risk that cases could still travel out of Auckland."

Labour's coalition partner New Zealand First has invoked the agree-to-disagree policy in Cabinet. Party leader Winston Peters says Auckland should be at level 2 and the rest of the country at level 1.

"There's not been a case in the South Island since April this year and round the rest of the country very similar results apart from four in Tokoroa and they were [contracted] all in Auckland.

"This is costing hundreds and hundreds of millions ... every extra week that we're not required to do it." 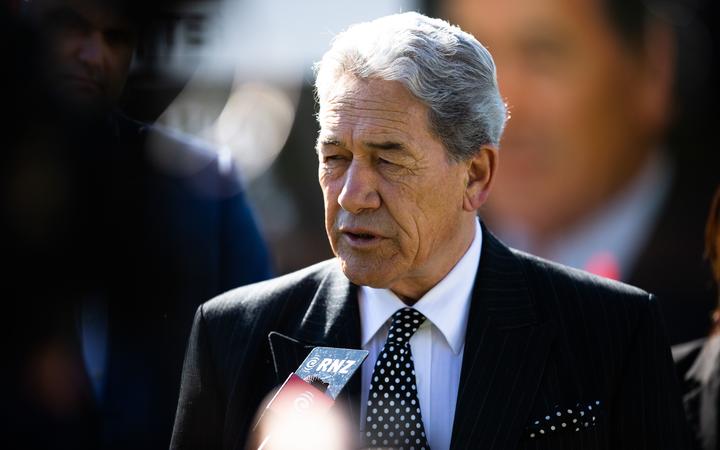 He says the information supplied by Dr Ashley Bloomfield does not justify the extension.

"When you get hold of [the information] you'll see that it's not granularly sound in terms of the scientific sense. It is not consistent. There are all sorts of statements being made now that were not made way back when we did the first level shut downs.

He says the decision to maintain alert levels is not consistent. "You're allowing Aucklanders to travel, so to speak, but everywhere else is shut down. How does that work?"

He is not calling for a return to hard borders between Auckland and the rest of the country, however.

"It's contradictory, and New Zealanders know it ... our proposal was and always has been the case before we went into lockdown at the very beginning was to get the military involved and ensure you had the resources to do the job properly including masks. None of this was done ... we said from the very beginning there was no need for [the rest of New Zealand] to go out of lockdown 1 in the first place, and the evidence has been proven that we were correct when we said that."

Masks should also be worn in places where there is risk, he says.

"We're starting to wonder very much because we don't get the same advice the prime minister has and she doesn't share it ... I'm feeling they're starting to get a bit political.

"In Auckland, campaigning is reduced to essentially handing out pamphlets and ... doing things on social media because there's only 10 people in a room, so it's very tough. But when the going gets tough the tough get going, so we do. 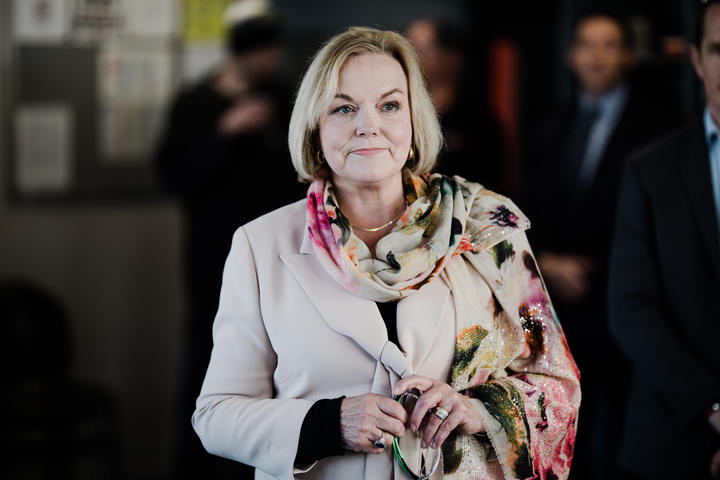 "I think it's very clear that this is now a political decision that we're seeing."

She says she wants Ardern to front up and "explain exactly how the decisions are made and how they differ or not with the advice that they're getting".

"We'd just like the government to get their act together ... too frightened to do anything so does nothing."

She says she sees no reason why the South Island should be at the level it is at the moment.

"We're not pleased, we're out there campaigning in the most impossible circumstance and we're looking at the economic and health analysis and we don't agree with that.

"A lot of people are starting to ask me 'why are you guys trying to shut down a proper campaign, are you part of this design', and I'm saying most certainly we are not."

He would not say it was a stitch-up by Labour, but that he would have thought there would be far more analysis on the health statistics and "so-called modelling".

"On what is it based? Where is the international evidence that this is going to work? I think people are entitled to know that because their economic lives and their jobs and their business futures massively hinge upon this."

He says the decision is "far too reliant on so-called experts".

"They cannot say on the one hand they are managing it successfully and on the other hand we must continue with restrictions due to a single initial outbreak," Seymour says.

"The level of risk the country is able to take depends on the competency of the government's contact tracing and obviously the fact that we can't take any risk shows we don't have gold standard contact tracing to get on top of outbreaks, and so are condemned to lengthy and expensive lockdowns that are devastating New Zealanders' livelihoods in some sectors...

"The South Island has had no cases of Covid-19 for 42 days and yet they still find themselves under restrictions simply because the government's contact tracing is so poor they can't afford to risk a single outbreak."

He had heard from businesses that they "understood the first lockdown, they endured the second, but they cannot make money under these restrictions because of the reduced activity."

"It's almost worse than being shut for many businesses," he says.

The government's response had not been nimble enough to deal with the "realities of balancing economic and health prerogatives in an efficient way".

As for New Zealand First's position to "agree to disagree" with the alert level extension, Seymour says: "If New Zealand First wanted to have an impact on the management of Covid they have had many opportunities to do it over six months, but there was no election then. Now there's an election, but it's too late to make a difference to New Zealanders' welfare".

There was one new case of Covid-19 reported in New Zealand today, and updates were provided about the infected health worker who works at the Jet Park quarantine facility in Auckland.

Yesterday it also emerged that a person visited Les Mills gym in Takapuna while infectious, and that there 89 people considered to be close contacts.

Ardern confirmed the person who went to Les Mills worked at a managed isolation facility.

"That individual works in a managed isolation facility ... and in the facility that we have been keeping people who from the Auckland cluster have Covid-19. So as a health worker that's being exposed to those who have been in quarantine rather than having picked it up in the community. That's the link."

She says that case and its close contacts are being well managed.

She says people working in quarantine facilities have been asked to keep a strict log of their whereabouts and who they come in contact with, and also tracking their symptoms.

"I do believe we can find a workable solution so we can make the Bledisloe Cup happen."

She says New Zealanders are capable to engage in the elections and attend the Bledisloe Cup, if it were to be held on 17 October.

"We are able as a nation to accommodate both a ruby game and an election."

Collins says the government has "stuffed up" the SANZAAR rugby championships and will probably lose hosting for the Bledisloe Cup.

"Because they couldn't organise themselves. We had on one side the Australians able to work out how to make things work and we have our government incapable of how to make something work. I'm not surprised by that, I'm just constantly floored that other people ever think that these guys could do anything.

"I'm just disgusted by it, that they can't get rugby games here, because they can't even organise how the Australians are doing it," she says.

"The rugby union's been very clear, it's not SANZAAR politics, it's Labour Party politics."

Auckland has been at a tailor-made alert level 2.5 since 31 August, as a step down from level 3 restrictions. It limits the number of people allowed at gatherings to no more than 10, while outside of Auckland gatherings of up to 100 are allowed.

The rest of the country has been at alert level 2.