A Whakatāne man forced to head back to New Zealand as the Covid-19 pandemic unfolded has found a new career, and scooped a Young Māori Farmer Award. 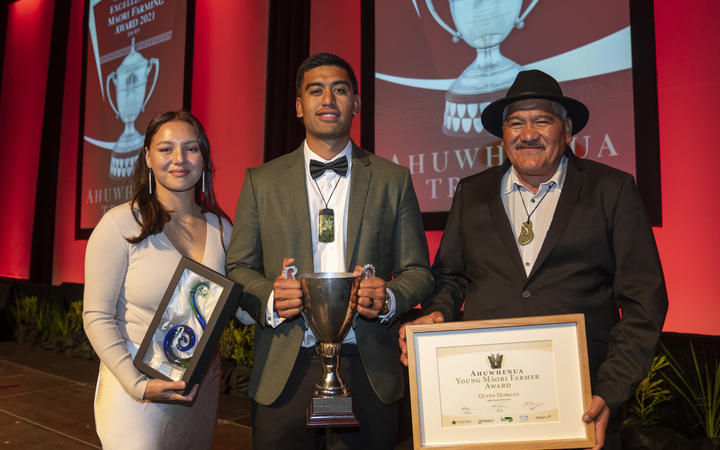 Quinn Morgan, centre, was announced as the winner at a gala dinner in New Plymouth, Taranaki. Photo: supplied/ Alphapix

Quinn Morgan, who is working his first season on a dairy farm was awarded this years Ahuwhenua Young Māori Farmer Award at a gala dinner in New Plymouth on Friday.

The award was set up in 2012 and is designed to recognise up and coming young Māori in the sheep beef, horticulture and dairy sectors.

The 26-year-old said it was unreal to receive the award.

His first season in farming had been a far cry from his previous job in the fitness industry in Australia.

Before trying his hand on the Otakiri dairy farm, near Whakatāne, he was working as an F45 instructor when he and his partner Samantha decided to move home to settle down, in 2019.

Morgan came back to New Zealand to find work and was keen to join the police, but then Covid-19 hit.

'The police weren't taking new recruits, and my partner and three children got stuck in Australia.'

Determined to find work and a career path he was influenced by whānau who were involved in farming.

"I wasn't getting very far because of my lack of experience, I had a job interview in Rotorua but didn't get the job, but luckily they put me in touch with Sam and Kate Moore my employers - they've thought me everything.

"Coming from the fitness industry I learnt a lot about feeding deficits and surpluses, so just learning how to transfer that over to our cows [I've] picked things up pretty quick," he said.

Loving the job so far he can see himself being involved with farming for many years to come.

"Farming just ticks so many boxes for me. My wife is involved in my career and is studying herself, and we just get to spend a lot of time as a family.

"I have breakfast with the kids every day after milking, which I've not been able to do in the past, so it's great," he said.

He said putting a Māori lens on farming has huge benefits.

"It's just the history and the stories, coming home and being kaitiakitanga on the land, it makes you walk a little taller.

"You have an obligation to look after our whenua, and we don't take that lightly.'

Judge Aaron Hunt said Morgan exemplified all that is good about young Māori who are making successful careers in the primary sector.

"Quinn has shown great commitment to his work, excellent leadership, and will do a great job as a role model for other young Māori contemplating a career in the agribusiness sector.

"Every day there are new opportunities opening up for young Māori as new land is brought into production and other land improved," he said.

The other major award of the night was the Ahuwhenua Trophy for the top Māori dairy farm, which was awarded to Tataiwhetu Trust.

The trust, which runs an organic dairy farm in the Ruatoki Valley south of Whakatāne, beat out two other finalists; Pouarua Farms, near Ngātea, and Tunapahore Incorporation, which runs a farm at Hawai and another at Tōrere.

Ahuwhenua Trophy Management Committee chair Kingi Smiler said the standard of all the finalists was particularly high and it was hard for the judges to come up with a winner.

"Field days run by all the finalists were extremely good and showed the quality and depth of Māori dairy farming enterprises, each finalist excelled and all are great role models for farmers.

"But in the end Tataiwhetu Trust were determined the winners, and they and their staff are to be congratulated for this. Their farm is very special, and is yet another example of our people working innovatively and hard and focusing on key strategic objectives," he said.