A new advertising campaign to lure New Zealanders to Australia to help pick fruit and vegetables is the latest attempt to try to offset a potential labour shortage crisis for Australian farmers. 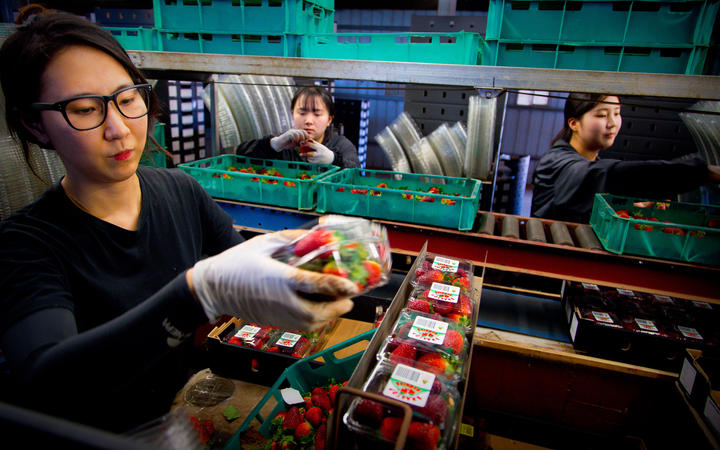 Minister of Tourism and Trade Simon Birmingham said he hoped it would "attract thousands of Kiwis" across the Tasman to work on Australian farms.

"Kiwis, where most states have got the borders open for quarantine free travel, are an obvious market where we hope that young people can choose to take a gap year," Birmingham said.

Birmingham said he hoped New Zealanders would not only help to fill employment gaps in struggling sectors, but also bring in much-needed tourism dollars.

"We equally hope that it becomes a two-way travel bubble, and it may well be that when that occurs some young Australians decide to do likewise in terms of travelling around New Zealand and doing a bit of work while they're there," he said.

The Federal Government has been trying to encourage Australians to take up the work by offering up to $A6000 ($NZ6373) to offset the cost of moving to a rural area for a job. However, the scheme has had low uptake so far.

The 'Relocation Assistance to Take Up A Job Program' also provides up to $A2000 to New Zealand working-holidaymakers who relocate here, provided their employer is registered with the program.

However Roger Brownlie, a stone-fruit farmer in Hawke's Bay, said many New Zealand farmers were also finding it just as tough to source local workers, and doubts the advertising campaign will work.

"We are getting Kiwi workers [on our farms], but the problem is we can't get enough of them," he said.

"I don't know if New Zealanders will be keen to go to Australia, given we have done a good job of keeping Covid out of New Zealand."

Brownlie joked that Australia's advertising blitz was an attempt to "poach our workers, but it is up to the individual if they want to go".

"It's unsettling because you don't know if you will get your fruit picked, and this is a challenging issue for New Zealand farmers, Australian farmers and farmers worldwide."

The organisation would continue to work hard to get locals to fill jobs on orchards in New Zealand, he told RNZ.

"Very clearly we can't stop people moving to Australia if they want to do that but our focus is very much of saying 'well you know you can stay in New Zealand, we're completely Covid free, we don't have to battle snakes and spiders ... you can travel freely around the country [and] earn a good living."

Pollard said while New Zealanders could travel to many parts of Australia without having to quarantine, they would have to do so when they came home.

"At this stage there's no indication that a trans-Tasman bubble is going to step up any time soon, so they are going to lose two weeks out of their lives while they quarantine."

Birmingham also urged young Australians, who would otherwise be planning a gap year overseas, to instead consider travelling around Australia and working on farms.

The Federal Opposition has dismissed the government's plans to encourage Kiwis to come and work on Australian farms, and in the process fired a shot at the nation's horticulture industry over claims of worker exploitation.

Labor's Kristina Keneally says the government should be bringing stranded Australians home before it looks to recruit foreign workers.

"I think many Australian parents would be horrified to learn that the fruit they put in their kids' lunchbox has been picked often by a 19-year-old backpacker who is sexually exploited and having her wages stolen," she said.

Last week, a report commissioned by the Australian Workers Union found some berry pickers in northern New South Wales got paid as low as $3 an hour.

The vegetable industry hit back at the suggestion Australian fruit is often picked by exploited workers.

"The vast majority of growers do the right thing, are responsible employers and take their obligations to employees seriously," James Whiteside, the chief executive of horticulture lobby group AUSVEG, said.

"We do need to weed out those who don't, [but] to tar the whole industry with that brush is irresponsible and she should know better."

Australia usually has about 135,000 working holidaymakers at this time of year from all over the world, but that has plummeted to 52,000 because of international border closures and travel restrictions caused by the Covid-19 pandemic.

AUSVEG says it needs at least 26,000 foreign workers for the upcoming harvest, and is lukewarm about the new campaign to help fill the gap with Kiwis.

"I think it will not solve our problem, we are happy the government has recognised there is a problem and is taking action, but if they expect this will solve the problem then we are likely to be disappointed," Whiteside said.

AUSVEG renewed calls for the Federal Government to consider including Pacific Island nations with no Covid-19 cases in the trans-Tasman travel bubble, which already guarantees quarantine-free travel for New Zealanders coming to Australia.

"We will always have a preference to employ Australians first, but we have known for a number of years the Australian workforce can't supply a sufficient number of workers," Whiteside said.

"The only way we will get a step change in the size of the workforce is to get people from the Pacific Islands back into the country.

"Our request with the government is they work much more closely with the states to ensure the quarantine systems can accommodate that.

"But where it's safe to do so for ourselves and for the Pacific countries, [Australia should] expand the bubble to allow people from countries free of Covid-19 to come into Australia, and we think that is what we need to do quickly".

There are also calls by some state Labor agriculture ministers to address the labour shortage by using out-of-work Australians on JobSeeker.

The ministers want the Federal Government to let people who are receiving JobSeeker payments to continue to get that money, even if they are working in low-paying farm jobs, as a way to incentivise more Australians to take up farm work.