The government has offered help to the under-pressure horticultural sector by allowing 2000 Recognised Seasonal Employer, or RSE, workers in to help pick fruit and vegetables this summer. 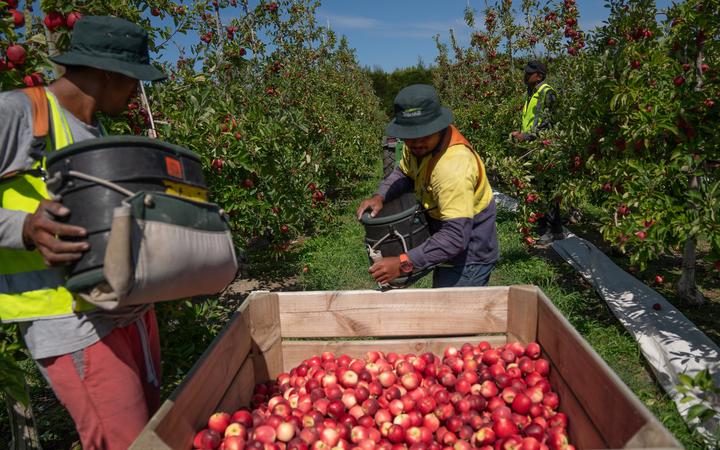 The fruit pickers will need to be paid the living wage of at least $22.10 an hour. Photo: Rocket Global Ltd

Growers had complained that without these workers, some produce would rot unpicked.

The government has however imposed strict conditions.

The workers would have to be paid the living wage, of at least $22.10 an hour.

Their quarantine costs would have to be paid by their employer and workers would be paid for at least 30 hours a week while in quarantine.

Recruits would come from island nations in the Pacific, but the government has not specified which countries will be chosen.

Repatriation after the picking season is finished would have to be worked out before the workers could come in.

They would arrive between January and March next year.

"The government has listened to concerns raised by the (horticulture and wine growing) sectors," Minister of Agriculture, Damien O'Connor said.

"We understand their importance for our Covid economic recovery. These changes will help support their ongoing success.

"We accept they need help to meet labour shortages that threaten harvests this coming season, so we are acting to allow up to 2000 experienced RSE workers to come to New Zealand from certain Pacific Island countries."

Due to limited capacity in managed isolation and quarantine facilities, entry would be staggered, with workers coming in groups, O'Connor said.

The 2000 workers being allowed in will augment approximately 6000 RSE workers who did not go home last year.

But it still falls short of the total number that came in earlier - up to 14,400 RSE workers arrive in New Zealand annually.

With many only staying for part of the season, the highest number of RSE workers in New Zealand was 10,500 at the peak of last season.

Their return this year has been blocked by Covid-19 border restrictions.

In addition to the RSE exception, working holiday visa holders still in New Zealand with visas expiring between October 2020 and March 2021 will be, or have already been, automatically granted another visa to enable them to work in the horticulture and wine industries this summer.

Immigration Minister Kris Faafoi said the seasonal workers will arrive after the rush on managed isolation facilities as people return to New Zealand for Christmas.

"We are apportioning some of the managed isolation facilities, we've planned for this, so there should be plenty of capacity for managed isolation for those Kiwis who have the right, and we expect, to come home," he told Morning Report.

There had been some "challenging discussions" with employers over paying a living wage and other conditions, with some in the sector more willing than others.

Individual growers would decide whether to extend the living wage to New Zealanders and visa holders, Faafoi said.

"RSA workers coming to New Zealand are very experienced so making sure they are paid for that experience and for the productivity is important.

"We have certainly seen proposals from sectors and regions of New Zealand where they are quite willing to meet those kinds of conditions, to meet the challenge that they have with the labour supply."

There is also financial help for New Zealanders wanting to work in these seasonal industries.

Minister of Social Development Carmel Sepuloni said unemployed people who move for a season's work, and are still paying for housing in their home area, will get up to $200 for 13 weeks for accommodations costs.

There would be a $1000 incentive payment for workers who completed jobs of six weeks or longer.

Changes have also been made to the Seasonal Work Assistance Programme for those who have moved off a benefit to take up a seasonal job, but haven't been able to work due to bad weather and as a result have lost income. Workers will now be able to receive the equivalent of minimum wage up to 40 hours a week, depending on the number of hours lost.

She said labour shortages in the horticulture industry were not unusual and better workforce planning was needed.

Sepuloni told Morning Report the government would like to see wages go up, and there were examples of employers paying more, but it was not industry-wide. "We need to continue to work on that and we're continuing to do that."

"We require better workforce planning. It is not just government, it is the industry that also needs to step up."

Seeka kiwifruit company chief executive Michael Franks said RSE workers would usually make up 1200 of its 3500 workforce, but at the moment there were fewer than 200.

"Our labour shortage coming up at harvest is going to be acute. Anything that takes that acute pressure off is appreciated - but probably 2000 is not enough."

Seeka was working with MSD and Ngāti Hine in Northland and Te Arawa in Bay of Plenty to try and train more New Zealanders into horticulture work, as well as setting up a programme for workers displaced from other industries.

Paul Paynter, general manager at Hawkes Bay firm Yummy Apples, said workers would have made the living wage or more last year, so pay was not an issue.

There were issues of productivity when the labour market was tight and the company increasingly employs people who may be struggling. "They've had injuries or they're dealing with mental health issues, or whatever, so we have a lot of people who are not so productive, and we really welcome them, but those are the ones we end up topping up to the minimum wage, because they might pick two bins of apples a day wheras the average worker is picking five."

For Central Otago grower Stephen Darling, backpackers made up a large part of the workforce, since there is was no large population centre nearby as a source of local workers.

While 2000 RSE workers was a welcome start, the region needed all the workers under the scheme, he said.

The harvest volume will drop and pressure will go on prices a result of the labour shortage, he said.

To date the government has provided border exceptions for up to 30 veterinarians, up to 570 deep water fishing crew, and up to 210 agricultural machinery operators.

In the end many of these did not take up their allocation because of a shortage of places in managed isolation.