The Dunedin businessman behind a planned mega-dairy conversion in the Mackenzie Basin is shrugging off criticism from Fonterra about further intensification on the vulnerable landscape. 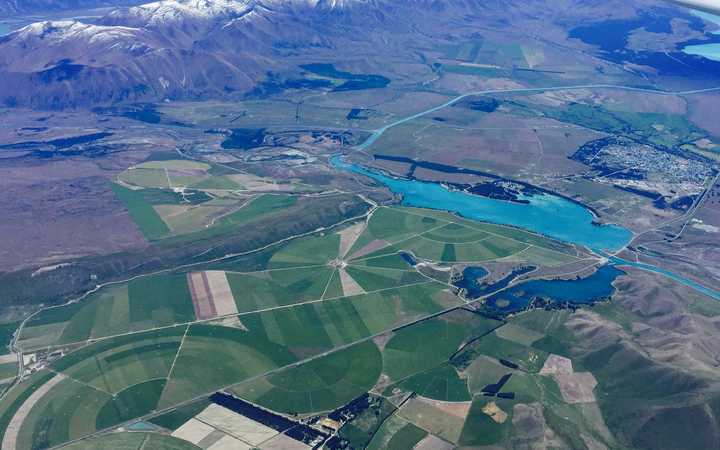 Irrigation around Twizel as seen from the air in 2016. Photo: Gavin Wills

Originally, he was granted resource consent for 15,000 cows, but plans to put 2000 on it by next year, rising to a maximum of 5500 cows when consents are gained for extra cow sheds.

Earlier this week, Greenpeace campaigners chained themselves to heavy machinery in a bid to stop the work.

Fonterra posted on social media that it would prefer not to see more dairy expansion in the Mackenzie Basin.

Hey, while we don't grant the consents, we'd prefer not to see more dairy expansion in the Mackenzie Basin.

Mr Murray had little to say in response to Fonterra's input: "I think the best way you deal with that is to ask them. We have signed up with Fonterra and that's all I can say really".

In a statement, Fonterra chief operator Miles Hurrell said the company had been saying for a while that its strong preference is for no further expansion in the Mackenzie Basin.

"We're concerned it will have a negative impact on the region's sensitive environment," Mr Hurrell said.

The co-operative was legally obliged to accept applications to supply Fonterra from farms that were within its collection zone.

"Before we pick up milk, the farms would need to have all required environmental consents," Mr Hurrell said.

However glider pilot Gavin Wills, who has lived in Omarama for 20 years, said it was a shame the company did not think to speak up years ago.

"I think it's a bit of a cop-out really. If they'd said this 10 or 15 years ago we might not have had dairy development in the Mackenzie at all."

Mr Wills said it was easy for Fonterra to say that now, but it needed to back it up with active discouragement to new dairy farms trying to develop in the area.

Mr Valentine conceded his irrigation plan was a large-scale scheme by anyone's standards, but said he was under a strict monitoring regime.

About a year ago he started monthly monitoring of the Tekapo River - checking the streams and rivers at 14 points - and the groundwater to work out implications of irrigation in the future.

"It's legal to pollute rivers in New Zealand ... yes, they'll monitor it but the pollution is still going to get in there because it's allowed to do so."

DairyNZ said it had nothing to add to the conversation on expansion into the Mackenzie, and the council consenting process was the best place to pick up any potential issues with farm conversions.