Greenpeace activists arrested yesterday for protesting against a dairy expansion in the Mackenzie Basin may have found an unlikely ally - Fonterra. 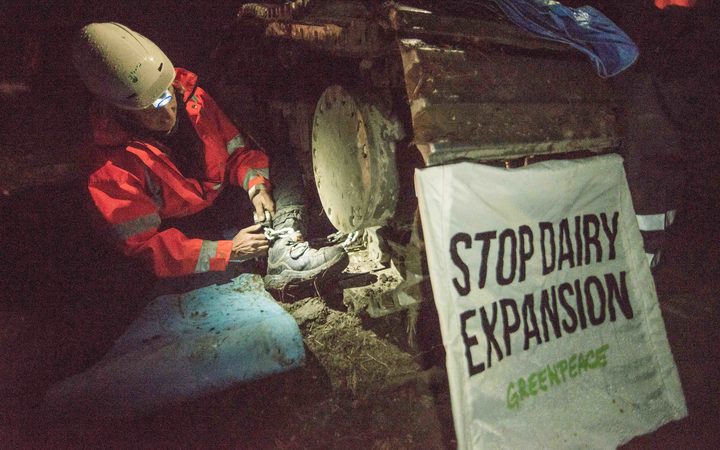 Greenpeace activists chain themselves to machinery in protest at a dairy farm expansion in the Mackenzie region. Photo: Nick Young / Greenpeace

Twelve people were arrested yesterday following the protest in Mackenzie.

Eleven protesters chained themselves to heavy machinery yesterday morning in an attempt to stop a mega-dairy conversion in the area.

Greenpeace said the diggers were working on a huge irrigation pipeline for the farm.

Hey, while we don't grant the consents, we'd prefer not to see more dairy expansion in the Mackenzie Basin.

Greenpeace said an 88-year-old man was among those arrested.

Police said they were taken to Timaru Police Station.

However, Greenpeace spokesperson Gen Toop said Fonterra's actions were "just words" and there was no action to back it up.

"Fonterra has a high intensity dairy model which is polluting New Zealand's rivers and now threatening the Mackenzie country.

"Fonterra needs to step away from industrial dairy farming and get behind the ban on new dairy conversions nationwide," Ms Toop said.