Interest in sheep milking is increasing, but farmers are wary of any sudden influx of new participants into the industry. 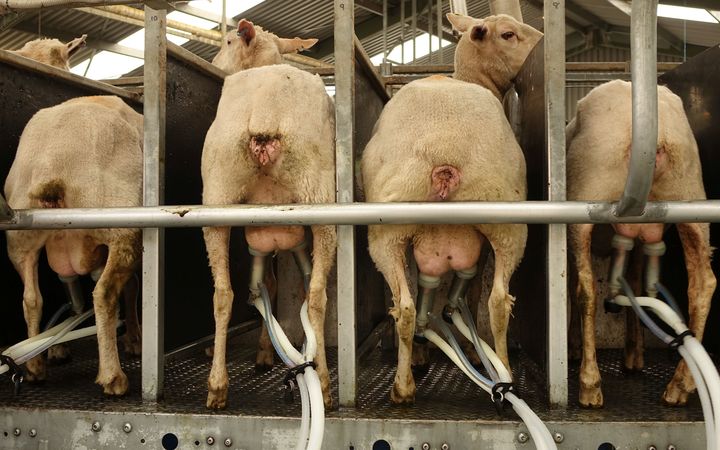 It was the first day of the annual sheep milking conference in Palmerston North yesterday and organisers said in the past year there had been a wide range of interest in the industry.

In New Zealand there were now more than 30,000 sheep for milking at 13 small-scale sheep milk producers and three larger operations.

Conference co-organiser, Craig Prichard from Massey University, said there has been a variety of interest from intrigued people, foodies interested in sheep milk, and farmers who are fed up with low prices in sheep farming.

Larger companies are also thinking of using sheep milk as a diversification strategy, which has driven the interest, Mr Prichard said.

"We've even had a little bit more interest from Fonterra in the last year, Beef and Lamb have taken a lot more interest, DairyNZ has taken a bit of interest

"Last year with the dairy price not really recovered people were looking at us pretty seriously ... what we were worried about was that there would be a really big influx of people into the industry - we really don't want that."

Mr Prichard said about 150 people will be involved in the three day conference which includes chefs, scientists, nutritionists and a genetic specialist from France.

In the past few months, new sheep-dairy genetic material has been successfully imported into New Zealand for the first time since the 1990s. This will add to the quality of the country's stock and improve New Zealand's ability to compete on a global scale.

However, the industry faces the challenge of how to structure genetic development, Mr Prichard said.

"The collective problem with us is everyone getting involved in genetic evaluation and breeding value identification and the development of an index which we can use to really grow and develop their production.

"We do need to have well structured communities that know each other, can work together and can solve some of those tensions which often develop between smaller groups."

Mr Prichard said he did not think the sheep milking industry would form co-operatives, as the dairy cow and dairy goat sectors have.

He said initially people thought an association might be a good option, but it was clear that sheep-milking farms in the Wairarapa, such as Kingsmeade, were taking a different approach.

"What kind of investment structure they adopt is interesting because they are definitely not going down a traditional co-operative route.. but they are looking at options.

"I don't think we will have a sheep milking association or anything, I see this as a tight community focused on sharing knowledge about sheep dairying both on the genetic and food side," Mr Prichard said.