Raw milk cheesemaker Biddy Fraser-Davies says she's still losing hundreds of dollars a week because nothing has changed since she went to Parliament to fight for fairer regulations. 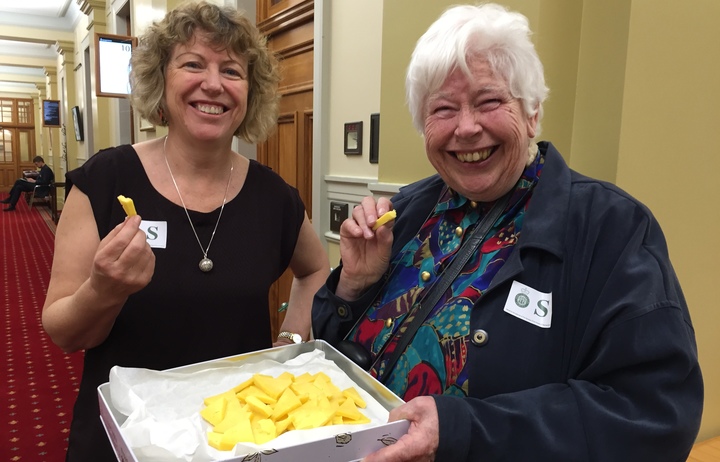 Mrs Fraser-Davies, 74, has been battling MPI and the Food Safety Act for years because of what she says are ridiculous and unaffordable testing regimes that are driving small scale cheesemakers away from a simple and sustainable lifestyle.

She spends about $20,000 a year on testing her award winning Cwmglyn Farmhouse Cheese produced from her four cows.

The regulations from MPI require ten cheese truckles to be tested before any can be sold, and Mrs Fraser-Davies says they won't tell her what the requirements are after that process is complete, which means she can't budget or set a price for her cheese.

She wants a clause in the rules so small cheesemakers aren't charged the same as large scale producers like Fonterra - but she says the government won't listen.

"It's just so disappointing, I just feel they think 'oh well she's just one old mad women from Ekatahuna and she'll continue to agitate so we may as well not take any notice because she's not going to stop.'

"There's this idea that I'm going to bring the whole dairy industry down if I get a bad cheese, when they're already quite happy poisoning most of New Zealand with the chicken industry - it doesn't seem fair."

The next move is unclear, said Mrs Fraser-Davies.

"Short of staging some absolutely spectacularly ridiculous sort of public appearance in Ekatahuna I don't know (what to do).

"I'm not agile enough to dance naked on one of my cows or something like that - which would hit the headlines. What can I do, they're just being so intransigent about the whole thing, I really really don't know."

Mrs Fraser-Davies said she resents charging people about $8 per 100g for a simple hard cheese just so she can cover testing costs and keep herself afloat.