By Jacob McSweeny for the Otago Daily Times

Gore and its surrounding areas are in flood recovery mode and one business says it has lodged an insurance claim likely to pass $1 million. 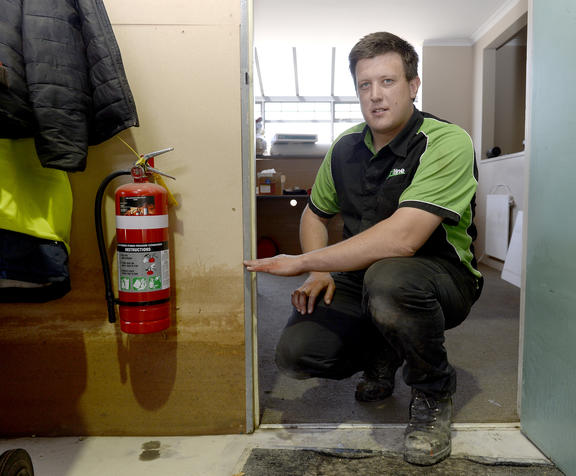 A state of emergency remains in place in Southland for perhaps another week.

All drinking water in Gore, Mataura and Otama still needs to be boiled.

One of the worst-affected businesses in Gore was Agriline, a farm machinery products store in the south of the town.

"On Tuesday night, I get a call from the neighbour and the water was just lapping at the door," Agriline shareholder James Hamlin said.

"By the morning, it was about a foot through and it was just rising through the day."

James and his brother, Agriline co-owner Gerry Hamlin, had to move quickly.

"We got everything of value out of the office.

"As it was rising, we were worried it was going to get to desk height, so we brought a vehicle in and loaded up the back of it and got out."

The company usually gets machinery parts from Italy, France, Spain and Australia and sells directly to farmers.

The cost of fixing and replacing damaged equipment would be more than $1m, James said.

"[The water went] through the whole workshop and everything, all the welders and compressors and parts, are all stuffed.

A full stocktake was completed and insurance claims sent off, he said.

The machines were ready to be displayed at Southern Field Days at Waimumu, from tomorrow.

"We had all the machines all cleaned and ready to go, and they all ended up under water.

"They've had to be re-cleaned and they have to have new bearings and gearboxes."

Agriline was now being run via mobile phones and a temporary office at the Hamlins' parents' house while a full clean-up was being planned for the office in Gore.

"Places were evacuated ... just before that, we had a couple of guys in the workshops that did a great job and whipped around and put a few of the electrical lightings up on the shelf.

"They also managed to put a few of the sales computers [high up] in the offices."

The Kane family farm in Tapanui felt the full force of about 200mm of rain in a period of 36 hours last week.

Floodwater ripped up part of State Highway 90 near their house and damaged stock fences.

One of the fences was built to move in floodwater but it was no match for the amount of water that came through. It was dragged to the other side of the road, ending up wrapped around power poles.

The farm's sheep and beef manager, Peter Kane, said a call to volunteers went out on the morning of Waitangi Day and they received a lot of help.

"We got these fences here fixed and a few others cleaned.

"It was a great community effort to get stuck in [during] trying conditions and get it sorted."

One of those volunteers was Tapanui restaurant The Robin & Co owner Tama Schimanski.

Schimanski was helping with one of the biggest clean-up jobs needed.

"Cleaning up fences ... it's about all my farming experience can get me, but it's not a problem," he said.

"It's just the community spirit thing to do. These people - we get our meat from farmers - [they] come and eat at our place.

"The Kanes were in for dinner ... they mentioned they were busy, they could use a hand and I said I was free so here we are."

The Insurance Council New Zealand said it was still too early to comment on specific numbers.