Spark Sport sold more than 200,000 subscriptions to watch the Rugby World Cup on its streaming service, the company says. 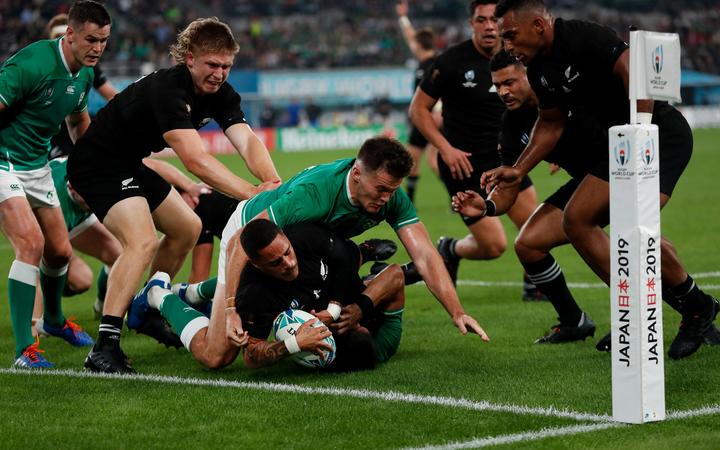 The quarter-final between the All Blacks and Ireland was its most watched, with more than 212,000 streams.

The company said in a statement this made it the most-watched sports stream in New Zealand.

It has also revealed that its most-watched highlights programme was the media conference after the All Blacks beat South Africa in pool play at the start of the tournament as well as interviews by Anika Moa.

Spark says two thirds of all customer complaints were in the first 10 days of the tournament and were mainly about set up and payments. One in five of its customers contacted Spark Sport for help.

Screen pixelation was a problem for many viewers during the streaming of the first All Blacks match at the Rugby World Cup against the Springboks in Yokohama. Photo: RNZ / Martin Gibson

Head of Spark Sport Jeff Latch said he believed Spark Sport had "cemented its spot" as a destination for New Zealand sports viewing.

"We know that some were nervous about our ability to deliver, particularly after the All Blacks vs South Africa match, but throughout the remainder of the tournament, we believe that we have demonstrated that streaming is the future.

"We are thrilled that the majority had a positive experience on our streaming platform. And while we acknowledge that not every New Zealander had the perfect experience on Spark Sport, we believe that the efforts that we made to get each customer's individual in-home issue resolved went above and beyond what you would normally expect from a streaming provider."

Spark Sport says more than 40 percent of its customers watched at least some of its programming on a mobile.

Of the complaints about the service, Spark said in a statement that less than 1 percent of customers had complex queries that were tricky to resolve and required more than four interactions.

"To help resolve the issues that this group was experiencing, Spark supplied over 500 replacement devices free of charge. We also completed over 150 home visits, nearly all of which solved customers' issues."