Are you prepared for the "economic armageddon"? 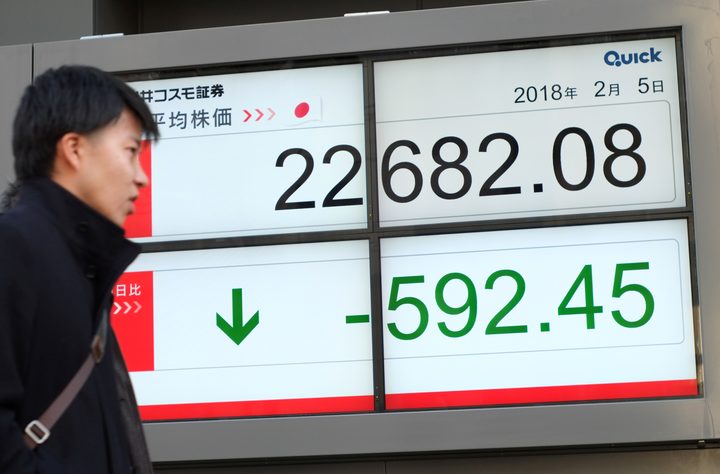 A pedestrian walks past an electronics stock indicator showing the closing numbers on the Tokyo Stock Exchange in Tokyo on 5 February this year. Photo: AFP

An Australian economist is warning the recent turmoil on global stock markets is just a sign of things to come, and a massive crisis is on the cards.

"I think that he points out a number of factors that suggest we are in for some economic troubles, particularly debt levels," New Zealand company director Simon Botherway said.

Mr Adams uses a number of financial and economic indicators to test the vulnerability of the global economy, including indebtedness, savings levels, and house prices.

With global debt at a record high $US233-trillion and interest rates on the rise, Mr Botherway said a day of reckoning was due.

"Global debt (318 percent of global GDP) is unprecedented, and we don't know where that will end up. But there is economic precedence that suggests that those scenarios could be very bad."

Others are sceptical, however, arguing the doom and gloom was overblown.

"The people who are saying these things are the same people who were saying that the global financial crisis was the end of the world, and who fairly regularly predict that really bad times are just around the corner," Simplicity managing director Sam Stubbs said.

New Zealand was vulnerable on some counts.

Household indebtedness using a debt to income ratio was at a record high 168 percent; the official cash rate sits at a record low 1.75 percent; and Auckland's house prices were considered severely unaffordable at 8.8 times higher than the average income.

But Mr Stubbs said these measures could not be looked at in isolation.

"You have to look at (household indebtedness) people's ability to service that debt and that is a function of how quickly the economy is growing, are wages going up? Is there actually economic activity that means people will be able to pay it off?

"The answer is yes. Globally this is the first time in a very long time we've had all the major economies actually growing," Mr Stubbs said.

Stock markets have already regained some of their composure since recent plunges.

But with the prospect of higher interest rates dampening returns from stocks, analysts point out that further volatility is expected and investors should beware.

"The volatility is a response to a period of very low volatility, unusually low volatility, and we may be returning to more normal conditions," Massey University School of Economics and Finance associate professor David Tripe said.

"And under normal conditions share prices go down as well as up."

BNZ head of research Stephen Toplis said New Zealand was in much better shape to cope than most countries if things went wrong, with a growing economy underpinned by robust construction activity, record tourism and rising dairy prices.

"So I'm an optimist for New Zealand in a relative sense, notwithstanding that if things go nasty (globally), we'll suffer some way or another," he said.

Financial columnist and author Mary Holm warned people to think twice about taking on more debt or risky investments in the current environment.

She advised taking a prudent approach, even for those in long term investment vehicles like Kiwisaver.

"If that does (the recent stock market turmoil) make you worry a lot, then that's a signal to perhaps move to a lower risk Kiwisaver fund.

"Knowing that it'll be less volatile, it'll probably also grow less over the years," Ms Holm said. "But it's not worth losing sleep over it."

She cautioned that if people did move to a lower risk fund, they should stick with that decision and ride out any further turmoil.