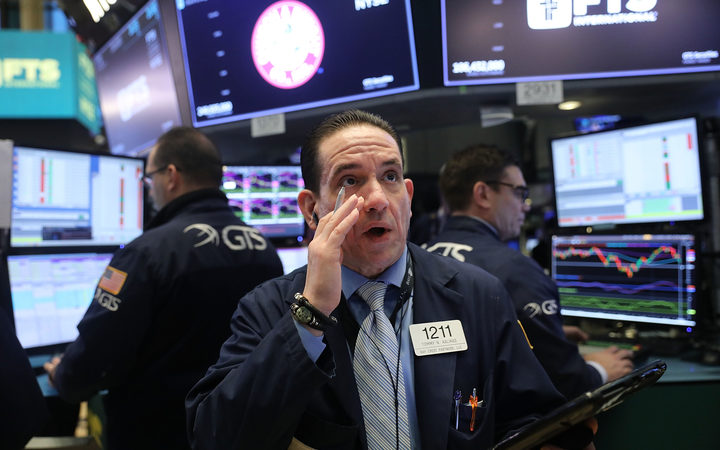 The leading US stock market index closed down 4.6 percent at 24,345.75, one of the largest falls in recent years.

The White House said it was focused on "long-term economic fundamentals, which remain exceptionally strong".

The fall surpasses a previous record 777.68 points drop on the Dow Jones during the financial crisis in 2008.

Monday's decline is also the largest fall in percentage terms for the Dow since August 2011, when markets dropped in the aftermath of "Black Monday" when Standard & Poor's downgraded its credit rating of the US.

The decline in the Dow was closely followed by the wider S&P 500 stock index, down 4.1 percent and the technology-heavy Nasdaq, down 3.7 percent.

In London, the FTSE 100 index of leading companies also fell to close down 1.46 percent or 108 points lower.

In Tuesday's early Asian trade, stocks were following Wall Street's trend. Japan's benchmark Nikkei 225 was down 4.8 percent but then recovered slightly and Australia's benchmark S&P/ASX 200 was down 2.7 percent. In South Korea, the Kospi was down 2.3 percent.

The New Zealand sharemarket is closed for Waitangi Day.

Why is this happening?

Investors are reacting to changes in the outlook for the American and global economy, and what that might mean for the cost of borrowing.

The stock market sell-off accelerated on Friday when the US Labour Department released employment numbers which showed stronger growth in wages than was anticipated.

If salaries rise, the expectation is that people will spend more and push inflation higher. 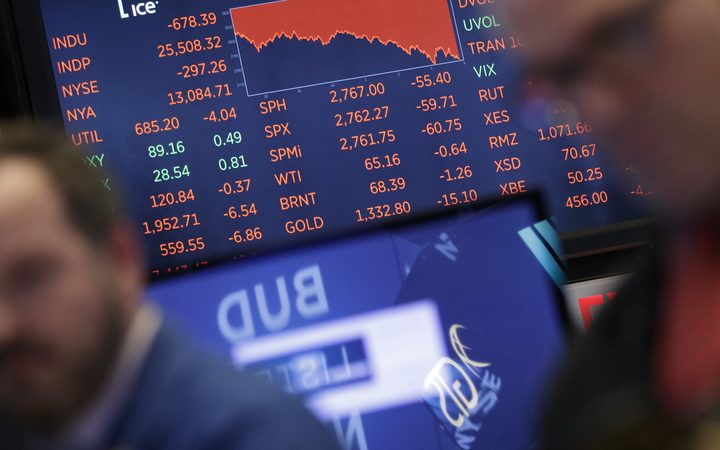 To keep that under control, America's central bank will need to raise interest rates, which has spooked investors who were expecting the US Federal Reserve to increase rates only two or three times this year. They now predict more rate rises.

"This is concern that the economy is actually doing much better than expected and so we need to re-evaluate."

Stronger global growth has prompted central banks in Europe, Canada and elsewhere to ease away from policies put in place to stimulate the economy after the financial crisis.

What impact will this have?

Analysts say investors should be prepared for choppier stock markets in the months ahead.

Ever since he was elected in November 2016 President Donald Trump has tweeted a number of times about the increase in US stock markets, using the gains since he took office to illustrate market improvement.

On 7 January, he wrote: "The Stock Market has been creating tremendous benefits for our country in the form of not only Record Setting Stock Prices, but present and future Jobs, Jobs, Jobs. Seven TRILLION dollars of value created since our big election win!"

But the Dow closed Monday having shed about a third of its gains since Mr Trump took office in January 2017.

It marks a dramatic turnaround from January, when it raced past the 25,000 and 26,000 point milestones in less than a month.

Joel Prakken, chief US economist for IHS Markit, predicts share price gains will be limited over the next two years.

But he added that markets would need to deteriorate more significantly for him to start to worry about the broader economy.

"The difference between this year and last year is we're going to see more periods of volatility like this as the market reacts to higher inflation," he said.

"We're just not used to it because it's been so long since we've had a significant correction."

What does it mean for investors?

Investors have been bracing for a downturn after months of seemingly unstoppable gains.

Wall Street firms also said they have been fielding calls from people worried about their investments.