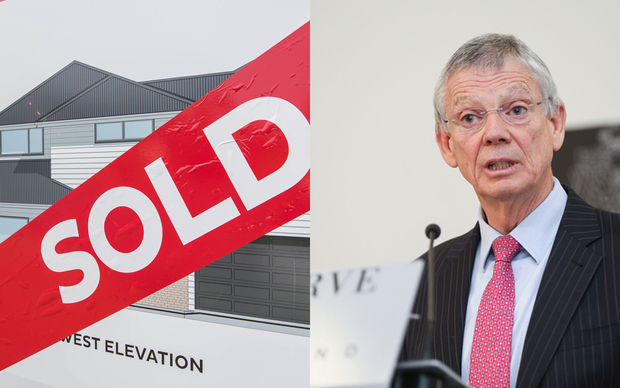 RBNZ Governor Graeme Wheeler said the country's financial stability remained at risk because of an overheated housing market, with more than half of bank lending for property, and households carrying heavy debt loads.

"Our concern is that a severe housing correction would pose substantial risks for financial system stability and the broader economy," Mr Wheeler said in the report.

He said the RBNZ had tightened property lending rules and the measures should make banks more secure.

Mr Wheeler said the RBNZ's other challenges were with monetary policy, with the official cash rate at a record low 2 percent to counter global uncertainty, falling commodity prices, a high dollar and weak inflationary pressures.

"A key rationale for cutting the official cash rate has been to lower the risk of a further decline in inflation expectations."

At the most recent cash rate review, Mr Wheeler said further easing of rates would be needed, and financial markets and analysts expected a quarter percentage point cut in November to 1.75 percent.

In a separate statement, the RBNZ's board of directors gave Mr Wheeler a nod of approval for the way he had conducted monetary policy, even though he had failed to get inflation into the target band of 1-3 percent, for more than two years.

The RBNZ's finances were hit by the stronger New Zealand dollar, which meant it lost money on foreign exchange positions in the past year.

The bank's annual surplus fell to $52 million in the year ended June, from $624m the year before. The rise in the currency meant the RBNZ lost $201m in foreign exchange dealings, after making $379m the year before.

However, the RBNZ's war chest for intervening in currency markets, if needed, increased by about $500m to $10.3 billion.

It has paid the government a dividend of $140m.