It was billed as transformational and a first of its kind, but did yesterday's Wellbeing Budget live up to the hype? 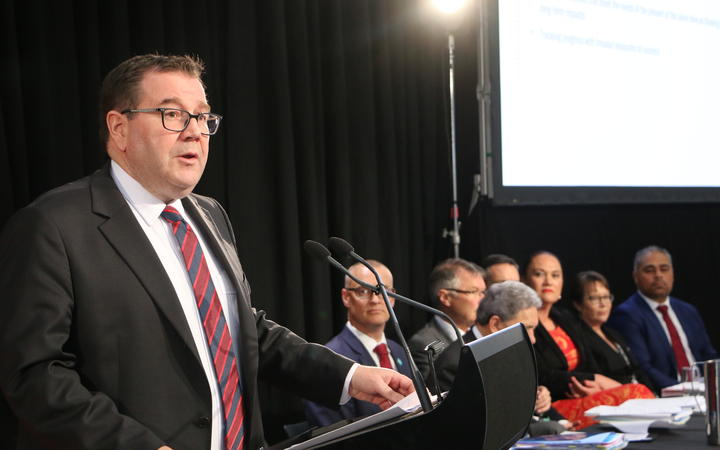 The 72-hour lead up to the finance minister delivering it was overshadowed by the debacle over a hack of the Treasury website that turned out to be nothing of the sort.

Just hours before the lock-up began the department cleared up just how the National Party got hold of sensitive Budget information - they simply typed it into the search engine on the Treasury website.

Accusations of hacking and a police investigation had come to nothing but after Grant Robertson had delivered his speech, the National Party were quick to say it didn't deliver what was promised.

Mr Robertson promised a new approach - to stop focusing solely on economic growth as a measure of a successful country.

"Governments have declared success on a narrow range of indicators in particular GDP growth. But New Zealanders have rightly questioned such claims of success when the things they hold dear, such as child wellbeing, a warm dry home for everybody or the ability to swim in our rivers or lakes has been getting considerably worse. The old way of doing things has left too many people behind,'' he said.

But Simon Bridges had his own description.

"This is a botched budget by a bungling incompetent government. But it's what this budget isn't that is the real tragedy for New Zealander, because it sure as heck isn't a Wellbeing Budget."

Reducing child poverty and taking mental health seriously are key parts of the government's plan over the next four years.

It also wants to build a productive nation in the rapidly moving digital age and move the economy towards a low-carbon future - but to that end, there is only a $300 million Venture Capital fund, the annual dollop of cash for research and innovation, and reforming vocational education.

Research on climate change and new technologies gets just $80m.

The big ticket item was transformational although not unexpected.

Mental health got a whopping $2 billion to fund the almost 40 recommendations from last year's long-awaited inquiry.

"I want every mother, father, brother, sister or friend who has seen their nearest and dearest suffer know that we have heard their call and we are answering it. Mental health is no longer on the periphery of our health system, it is front and centre,'' Mr Robertson said.

There's always a Budget surprise and this year rail won the lottery - and by extension New Zealand First - with Winston Peters basking in a transformational funding boost that's a win for the regions.

"These people on the other side, meant to be representing the provinces, and they're laughing at a billion dollar investment in rail. For too long rail was rundown, you know rail's in our national interest and as the Prime Minister said it makes our roads safer. And I want to make it clear the announcement that was made at the Budget today has one summation - rail is back on track,'' Mr Peters said.

Reducing child poverty is an area the prime minister repeatedly asks to be held to account on.

There's a raft of measures to start chipping away at this stain on the nation including scrapping school donations, a pre-announced family violence package and a new announcement to index main benefits to wage increases.

But it was the lack of extra money for benefit increases - just $10 to $17 extra by 2023 - that drew criticism from the Children's Commissioner, and the Green Party co-leader Marama Davidson agrees.

"There's a lot more that needs to be done, it's an important first step and absolutely incomes need to be raised. And the Greens have a commitment to overhauling welfare so we will keep working on that."

And as for lifting Māori and Pacific incomes and opportunities?

The government has responded to backlash over a lack of targeted funding with an $80m boost for Whānau Ora.

But with the money going to the service providers, not directly into the pockets of Māori, there's still some scepticism about what it will achieve.