Power Play - This Budget has eased some of the pressures that have been building up since the election of the coalition, but it is not transformational. 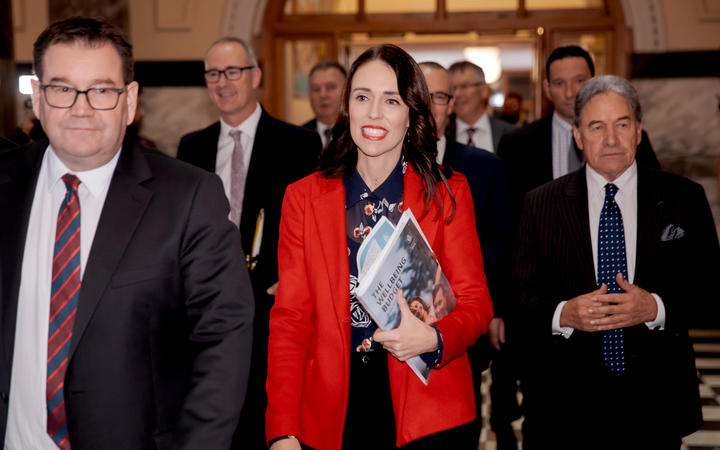 Mental health was a drum Labour beat loud in opposition and it had to deliver.

A major package had been well flagged and is a good first step towards establishing widely accessible services for hundreds of thousands of New Zealanders, much needed in the context of this country's shameful suicide statistics.

As laudable as the plan is, the major challenge will be to recruit the numbers of specialist staff to actually deliver the promise of people arriving at GPs or hospitals being to able to walk down the corridor to a mental health specialist.

The health and education workforces are already having to rely on people coming from overseas, with the added challenge of major reforms happening in the tertiary sector.

But you have to start somewhere.

The $1 billion for Kiwirail fits neatly in the strategy to revive the regions and reduce climate emissions by getting more trucks off the road.

It suits both the Greens and New Zealand First, with its self-styled "champion of the regions" Shane Jones.

The 10-year funding stream also gives Kiwirail some financial certainty after lurching from rags to riches under successive governments.

But there are never-ending demands on governments, which makes the use of the five priorities an effective way to run the ruler over competing bids from ministers

Basic spending on buildings and infrastructure assets in health and education is badly needed but are not always headline-grabbing.

But there is also spending in education that will ease the financial burden on many parents by scrapping the need for school donations and NCEA fees.

The elephant in the (class)room remains an angry and determined education sector; there was a super strike this past week and many more to come, with nothing in the Budget that will break the deadlock with teachers.

Beneficiaries will be better off in the medium term, with legislated increases to the main benefits and the ability to earn more before benefits are cut. While the minister says there's more work to be done to improve the welfare system this is one area in which Labour and the Greens promised transformation, but have delivered only incremental changes.

"Botched Budget" and "broken promises" were the lines given to National MPs in their post Budget spray of media releases.

Of course, it's their job to pick holes in the Budget but the "botched" was to keep poking the stick at the controversy that boiled over this week after National released secret Budget material.

But the party's spokespersons for health and education were sticking to their knitting, pointing out what the Budget had not delivered, including anything specific for GPs or midwives, and in education not enough money to keep up with operational spending.

More generally, The new format of the annual report style Budget looked different, but fundamentally there was spending in traditional Labour areas, in health, in welfare and to tackle inequalities.

Past the big spending items, much had been announced before Budget Day itself; that would have been to have given clear air for the mental health package, but it also meant journalists were picking through announcements even in the main priorities looking for those that were new, which did not give the feel of a Budget creating a seismic political shift.

The government has pushed spending to the limit and in a second term would have more flexibility to borrow more.

Finance Minister Grant Robertson says the whole point of the Wellbeing approach is to plan for the long term, but having taken care of core business he will have more room to appeal directly to voters' pockets in election year.