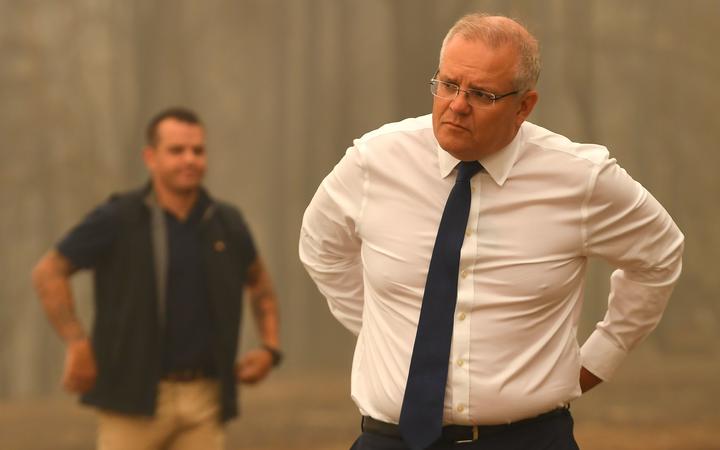 Some 28 people have died and more than 2000 homes have been destroyed by fires across much of the country.

The prime minister noted there were some moments during his response to the fires which could have been handled better, including visits alongside his wife to fire ravaged communities where he was heckled by locals.

"Prime Ministers are flesh and blood too, in how they engage with people," Morrison said.

"When I went into these places, I went there in good faith, and with [wife] Jenny on occasions, to provide what comfort and consolation I could.

"They're very strained environments and I think we need to think a little harder about how we do those."

Insiders host Speers also addressed the criticism the prime minister faced over his holiday to Hawaii during the bushfire crisis.

"In hindsight, I would not have taken that trip knowing what I know now," Morrison said.

"One of the great difficulties in any job, as you know, David, is balancing your work and family responsibilities. It had been a very busy year.

"I'd made a promise to my kids and we'd taken forward that break, as I explained when I came back and I thought I was very up-front about my contrition on that."

When asked why he decided to holiday overseas instead of in Australia, Morrison said: "The irony of all of this was my original intention was to holiday on the South Coast for two weeks."

"I had to change that arrangement because I was supposed to be on my way to India for that visit to see Narendra Modi, the prime minister, and then [Japan] Prime Minister [Shinzo] Abe," he said.

"I had to bring forward my holiday with my family, and that was the reason for the change to that date.

"So it was a very unfortunate series of events."

Morrison did not explain why he chose to holiday in Hawaii instead.

Concerns have been raised about the preparedness of states and territories to deal with the threat of bushfires, and whether the Commonwealth was too slow to act in ways such as offering the support of the Australian Defence Force (ADF).

"I think that is what would be necessary, and I will be taking a proposal through Cabinet to that end," the prime minister told Speers.

"But it must be done in consultation with the states and territories."

Morrison said there would also need to be discussion about greater flexibility for the Federal Government to step in and assist states during times of disaster, as highlighted by the call out of ADF reservists.

"This has created, I think, an environment where the people for the first time, I think arguably, have wanted to see a more direct involvement of the Federal Government in responding to these national disasters," he said.

The prime minister noted the current crisis had "pushed the constitutional authorities" for the Commonwealth to act "to its very edge".

"This should be one of the important steps going forward," Morrison said.

"This is the first time where I think the Federal Government has ever been in a position where we had to take this action.

"And to ensure that in the future it can be done in a way that is more pre-emptive posturing, that we can do that, I think, more seamlessly."

Morrison was pressed on whether the bushfire crisis would prompt a rethink of the Coalition's climate policies, and specifically whether the government would increase its 2030 emissions reduction target.

The current policy involves Australia cutting carbon emissions by 26 to 28 percent below 2005 levels by the year 2030.

"The Cabinet and the government will continue to evolve our policies to meet our targets and to beat them," he answered.

"I want to do that with a balanced policy which recognises Australia's broader national economic interests and social interest."

Australia has faced criticism from other countries for using so-called "carry-over credits", or counting emission reduction that went beyond the previous Kyoto climate deal, in meeting the targets under the Paris climate pact.