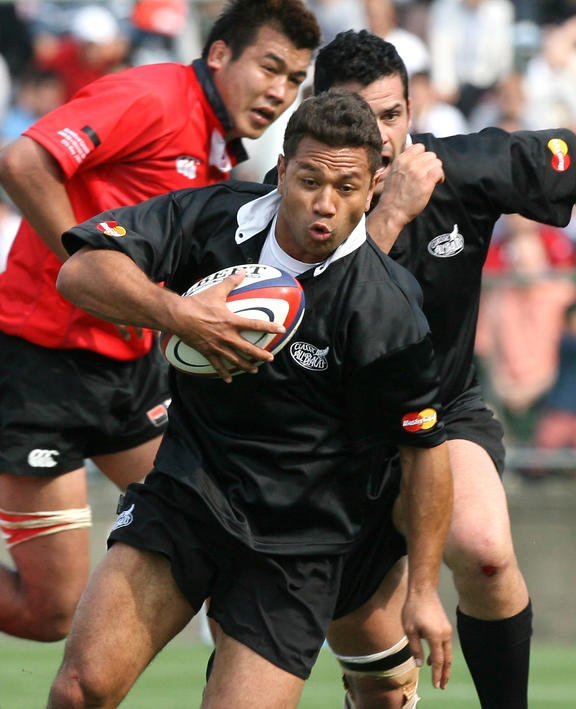 Former star All Black Pita Alatini has some advice for rugby players and fans alike ahead of the 2019 Rugby World Cup. The Tongan-born midfielder played 17 tests for the All Blacks between 1999 and 2001 and later played professional rugby in Japan.

This year's World Cup is being held in Japan and kick-off is September 20.

Pita, who is currently director of the Pakuranga United Rugby Club in Auckland, will be there. He wouldn't miss it. He left part of his heart in Japan when he lived there.

Now he is busy helping to manage the Tongan rugby team for the competition. He is well-placed to help them navigate the cultural offerings in Japan, having played professionally there for almost a decade when he left New Zealand for Japan's shores in 2000.

Pita scored a two-year contract to play for Tokyo’s Suntory Rugby Club before he signed on with another team for one year - the Kamaishi Seawaves Club. Instead, Pita ended up staying with Kamaishi for seven years.

"Yeah, it's true. We loved it so much, me and my family, that we kept wanting to stay. It's a really beautiful place." 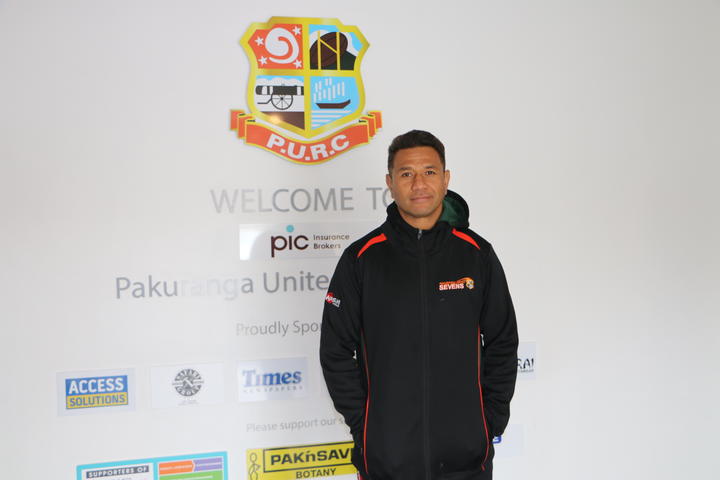 Kamaishi has a population of about 40,000 and the coastal city is famous for iron, fish and rugby.

But the city also made world headlines on 11 March 2011 when a 9.1 magnitude quake triggered a massive tsunami.

Waves as high as 40 metres spread across miles of shoreline, ravaging the coastline and damaging the Fukushima nuclear power plant.

Close to 16,000 lives were lost and tens of billions of dollars’ worth of damage was caused.

“For us, there was an element of clean up, bodies all over town, to see to first. There was a relief centre and medical and food supplies,” Pita says.

The Seawaves clubrooms and playing field became a refuge and focal area for the community. People set up camps and gathered food water and medical supplies from there as there was no power.

"All that, so it was lifting, loading and unloading and reloading, which was good for us as obviously we were physical and had been conditioned in that way.”

Pita, who had turned 35 years old that day, had luckily been away for an annual medical check-up at the hospital when the wave struck.

He and his family were okay, including his South African born wife, former pop singer Megan Alatini, his mother in law and two children Tiara and Trey.

He says others at the club weren’t so lucky.

“Yeah, we knew one of the ladies who worked in the office at the club, she passed and a player’s parent passed. And then our translator’s parents also passed, so yeah. That was pretty tough.”

He says people seemed more concerned with the wellbeing of the foreigners at that time and the resilience of the locals had a lasting impact on him. 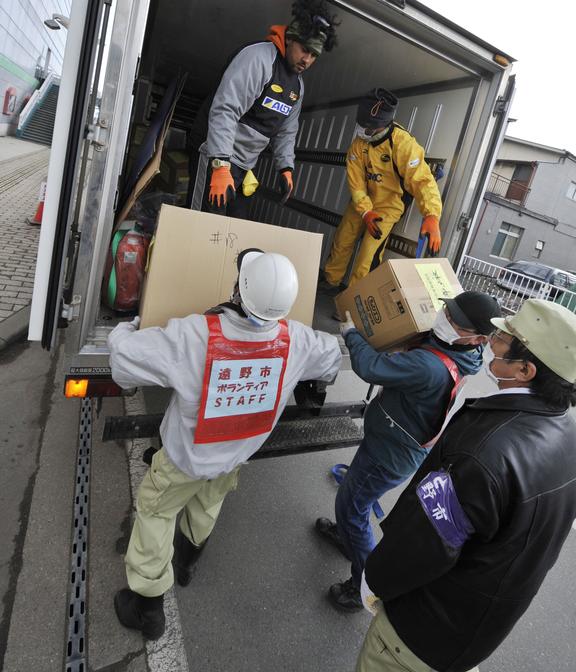 “That really blew me away that people were always more asking how we [foreigners] were yet we didn’t lose anything. Nothing there was ours. Whereas they’d lost housing, their family, their town. “

Pita stayed on longer with some teammates, including former Wallaby forward Scott Fardy, to help the community and despite the disaster Pita’s club made the decision to play on. The club had a good support crew from the local community.

Fast forward to now, Kamaishi has risen from ruin and rubble to now be one of the 12 host venues for this year’s Cup and because of the competition, rugby has gained some traction in Japan.

Pita says the Tongan boys on his team should adapt to Japanese culture quickly as there are many similarities with the island way of respect and culture.

“I was born in Tonga. Mum and dad both grew up in Tonga and we migrated here to  New Zealand when I was two. Just like all Pacific islanders we came here to find a better life better job and better education for kids”.

“He played for like 10 years for Tonga as an international, so rugby is thick in our blood and all my three older brothers all played for Tonga."

One of my dad’s dreams was that one of us would play for the All Blacks and then that was me. So, I was lucky enough and probably worked hard enough to create that opportunity and grasp it when it came. “

Pita’s still in rugby for his Tonga island side. He believes in the talent of this year's World Cup team and knows they’re so excited to be going to Japan.

But, initially, he had some reservations about Kamaishi hosting.

“I thought it might be more controversial knowing the money for the stadium to be built could have gone back into more recovery, but it’s great."

Named the Kamaishi Recovery Memorial Stadium,  it pays tribute to the people who perished in the tsunami, and to those still living there.

Work to build the stadium began in April 2017 and it was completed in August 2018.

The stadium was built on the site of two former schools that were wiped out on that day in 2011.

"Sounds like the whole community said it would be an extra boost to morale and the town," says Pita. 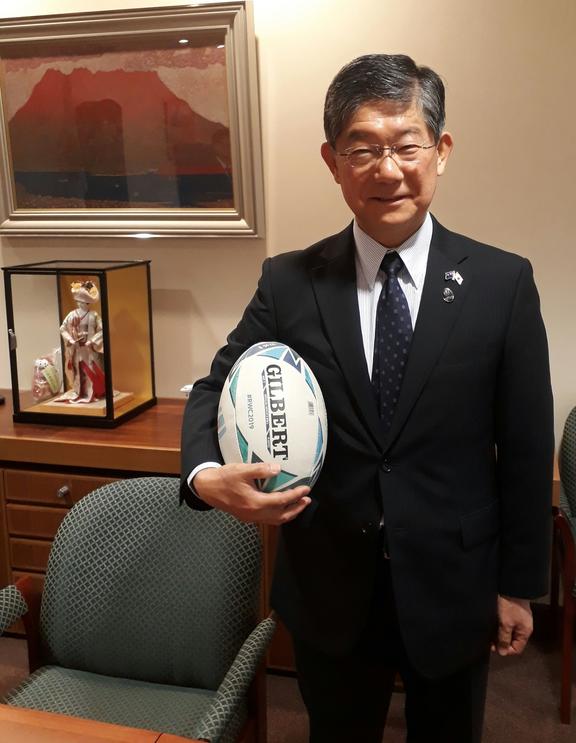 “I don’t want visitors to miss out on anything,” he says. “I recommend you explore our entire country. The World Cup matches are taking place in 12 different venues. Japan is a country filled with different culture and scenery.”

Ambassador Hiro and I enjoy a cup of Japanese tea as we talk about Japan, their rugby and of course the All Blacks.

“In 1899, a professor at Keio University in Japan taught his students the rugby rules and formed Japan’s first-ever rugby team.”

“I think rugby is a natural fit for Japan. It is a team sport. Like baseball or football. And has full-body contact like Sumo, which is our traditional sport.

“Now with many Japanese people enjoying the rugby every year, there’s no doubt in my mind that the World Cup will attract more fans to the game and grow its popularity even further.”

The pressure is on as it’s the first time Asia has hosted the Rugby World Cup but Ambassador Hiro says preparations are on track.

But he says there is one team that will be his all-time favourite.

“Japan’s team The Brave Blossoms and of course the New Zealand All Blacks is the other team I will support. However – and if – they come head to head, I will have to display my pride for Japan’s home team.”

Pita has his own ideas about who could win it this time round.