Professor Paul Moon has just written a book documenting the history of Te Reo since the arrival of the first European colonists in Aotearoa. He takes Wallace on a journey through the Maori language and the struggle it had to survive. A struggle, he says, is nowhere near over.

RNZ International senior reporter Sally round reports from Fiji where the prime minister, Frank Bainimarama, yesterday announced a range of measures to help the country rebuild after Cyclone Winston.

This week on Insight, the BBC reports from The British Virgins Islands on how a law firm there has been used by rogue states and oppressive regimes, including North Korea and Syria, to set up shell companies. 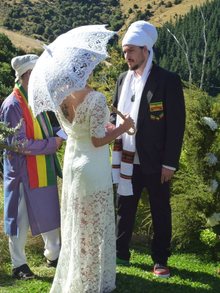 Former Green MP Nandor Tanczos has become the country's first Rastafarian marriage celebrant. He was turned down the first time he applied, a couple of years back, on the grounds that there was no evidence of a demand. Then he saw that the Church of the Flying Spaghetti Monster had successfully registered the first "pastafarian" celebrant and reapplied - and this time he was successful.

Hundreds of journalists in dozens of countries worked on The Panama Papers but our media were out of the loop. It was a pity - but was it also a problem? Also: reports of rugby's slow decline, a radio station stunt which broke the rules and harvesting the clicks from Paul Henry's peeking.
Produced and presented by Colin Peacock and Jeremy Rose.

One of Australia's best known and best loved comedians, Peter Helliar joins Wallace ahead of his International Comedy Festival appearance in Auckland. They talk about the similarities of 'Strayan and 'New Zild language and Peter shares some tips for young comedians on what to do and what not to do on stage.

For Generation X - Bill Oddie will forever be known as a Goodie - one of the three madcap comedians that took UK television by storm. Since those halcyon days, Bill Oddie has turned to the art of writing and more importantly, the art of birdwatching. He's combined both loves in his many books about birds and he talks to Wallace about his upcoming appearance at the Auckland Writers Festival.

Professor James Belich is one of New Zealand's pre-eminent historians. He left our shores for a prestigious position at Oxford University, four years ago, specialising in global history. He's back on home soil to speak about the centenary of the Easter Uprising and to give the Michael King lecture. Wallace speaks to him from Dunedin. 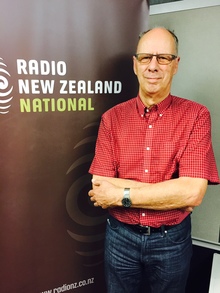 At one point in his 40-year career as a playwright, one of Roger Hall's plays was being staged somewhere every 11 days. He's won many awards and packed out theatres with plays such as Glide Time, Middle-Age Spread, and Conjugal Rites, and Footrot Flats the Musical. He's also written popular television series Gliding On and Market Forces. Wallace talks to Roger Hall about the individuals, writers and events that influenced him to become New Zealand's most successful playwright.