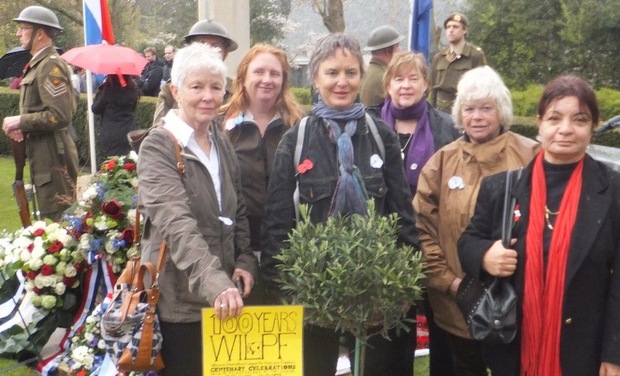 An olive tree for peace arriving at this year's Anzac Day commemoration in the Hague, which coincided with the 100 year anniversary of the founding of the Women's International League for Peace and Freedom. A NZ Quaker woman was there with some help from Quaker Peace and Service Aotearoa New Zealand. Photo: Supplied.

In this edition of Spirituality Mike Gourley explores the moral dilemma facing Christian clerics, as Chaplains, enlisted in military service. They’ve been called Clergy in Khaki. Later in the programme, Mike talks with by former air force chaplain John Neal and former principal Navy chaplain, Pauline Law – both committed Christians. First though, we hear a strictly pacifist perspective, from Stephanie Du Fresne, an advocate for Quaker Peace and Service.

'Quaker' is the nick-name given to the Religious Society of Friends, dating back to the days of its founder, George Fox, who refused to take up arms during the English civil war, either in the service of Cromwell, or the Monarchy. Imprisoned for his views, a judge said Fox should “quake and tremble” in the face of authority, whereupon Fox responded that the powers-that-be should “quake and tremble before Divine Authority!”

Stephanie Du Fresne says that as a matter of principle, Quakers always seek out a peaceful alternative to war, even at the expense of their own lives. Although they have struggled with the notion of war in the cause of defeating dark and oppressive forces.

Former Air-force chaplain, John Neal says that when he graduated as a chaplain in 1980, the debate over Vietnam was well and truly over, but the bigger, moral question still remains: Can followers of the Prince of Peace take up arms for the purpose of killing?

Former Principal Navy Chaplain, Pauline Law says she didn’t feel herself there was a conflict of interest between Christian beliefs and military service.

And like John Neale, Pauline Law says it’s a matter of giving service to those who are doing a job the Government has determined needs to be done… Pauline Law says it’s the same issue for prison chaplains: you may not approve of a prisoners’ deeds, or the prison system. But it is still necessary to provide the service nonetheless.