We're all just making it up as we go along to be honest. We're just pretending to be cooks." Daring Donna. 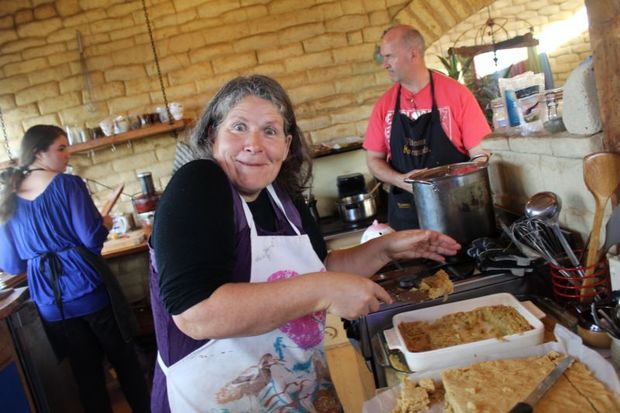 They‘re calling it the “Gift Economy”. For that you get a freshly cooked meal, made from screamingly fresh, local produce… and live music.In exchange you pay what you can afford. It all happens at the Earth House in Northland, run by two spirited women. 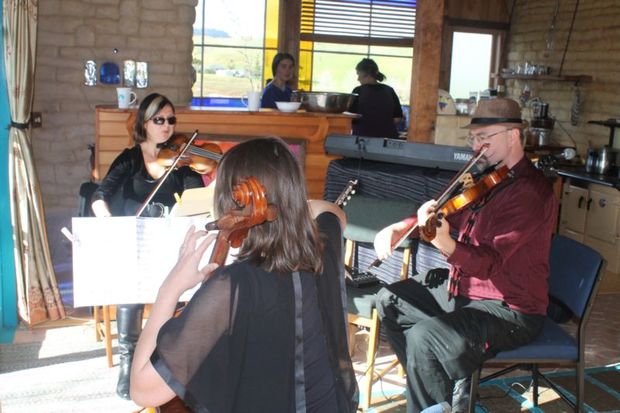 Meet Daring Donna, That’s the name she goes by round these parts. For the last two years she and her band of very willing helpers has turned this amazing house made of mud bricks into a community centre at Peria.

Peria is a small rural district about thirteen kilometres inland from Taipa on the coast at Doubtless Bay…and about an hour’s drive from Kerikeri. 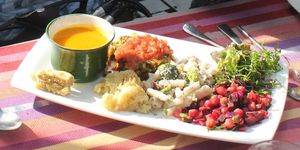 The house of hand-made bricks, crazy mosaics, and with pinnacles, pediments and spires straight out of Dr Seuss, was built not-quite-single-handedly by 85-year old Dhaj Sumner back in 1993.

When Daring Donna turned up and said she wanted to create a community house there, and to practice her gift economy ideas, Dhaj was right behind it and turned the house over.

By allowing the Gift Economy system to operate  at my house , I'm  not just blathering on about  the world being a mess. I'm trying to do something  about it." 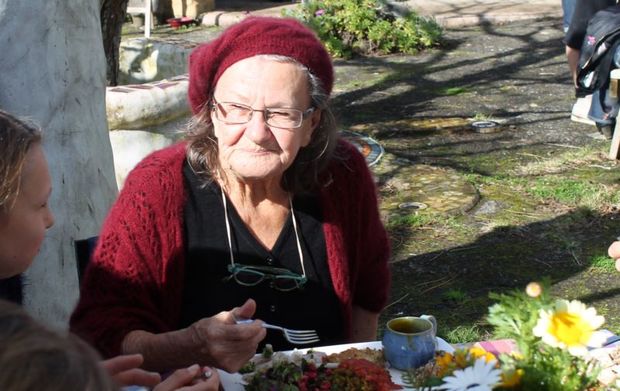 So you see, it’s all to do with giving. Daring Donna and others grow the produce, hand it over, and then Donna makes a gift of the cooked lunch. The musicians give their music, eat the lunch, and the other diners give their cash.

In theory all expenses will be covered, and everyone will be happy.

Today Donna has collected vegetables and fruit from around the valley, there’re lentils and beans, there’s pumpkin soup, home baked gluten free bread and coconut creamy desserts. The house is catering for about thirty people for a sunny Sunday lunch.

The kitchen has recently been upgraded with the help of six thousand dollars in crowd funding. Donna’s steaming ahead today with helpers, partner Darren Hunter, and young volunteers Luka and Jade.

The Auckland Trio which is playing today, comprises Sarah Spence, cello, Greg McGarity on viola and keyboard, and Elena Abramova, violin. They play a mixture of classical and folk music.

According to Daring Donna, there’s a good reason why the sun is beating down on this lunch party in Peria on a winter’s afternoon. She issued a severe warning to the  guardian angels in Dhaj’s garden that it must be fine. Donna reckons there’s   wonderful strong energy in Northland. It’s an energy that makes her get up in the morning and be a cheerful, useful person.

For Dhaj Sumner the house and property is particularly spiritual. She says the land   whispered “gotcha” when she first walked on it. She’s never wanted to leave. She loves what the community house is doing  because she says it puts into action her beliefs that a society based only on the almighty dollar is skew if. 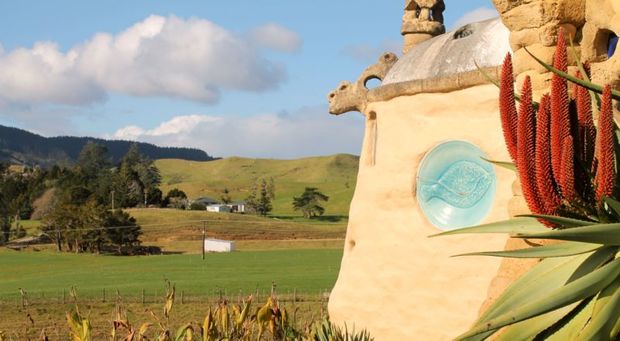 A view from the the Earth House Photo: RNZ/David Steemson

By the end of the sunny afternoon, everyone seems full of food and content to let the music wash over them. There’s a discreet queue as people pop cash into the “gift box”.

Donna and Dhaj are pleased. Donna’s already planning to next lunch, which for the first time will be prepared by the Earth House Youth Crew. 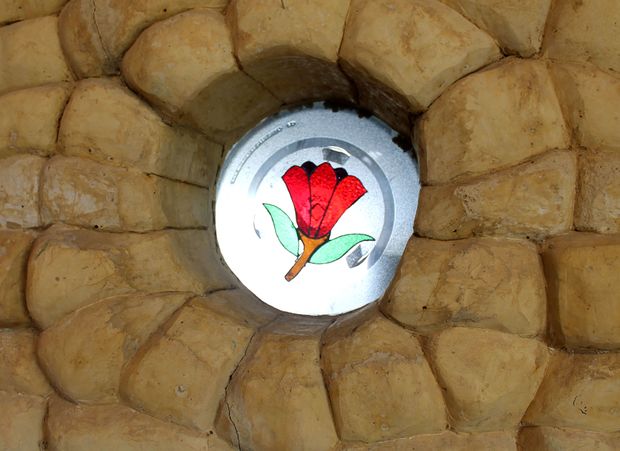