Nancy Gibbs is the managing editor of TIME magazine, has co-authored two New York Times bestselling political books with Michael Duffy (The Preacher and the Presidents: Billy Graham in the White House and The Presidents Club: Inside the World's Most Exclusive Fraternity), and written over a hundred TIME cover stories as a staff writer. She has been in New Zealand as a guest of Fulbright NZ, on their John F Kennedy Memorial Fellowship, to deliver the public lecture, Our Tools, Our Brains, Our Souls: the Transformations of Technology, in Wellington and Auckland.

Hannah Leckie works in water policy within the Environment Directorate at the OECD. She received funding support for her Master of Science degree at Oxford University from a 2013 Rose Hellaby Postgraduate Māori Scholarship, C. Alma Baker Trust Postgraduate Scholarship, and the Lincoln University Foundation Award.

Rebecca Elias is a former school teacher and dyslexia specialist, who is currently offering individualised learning programmes for children and adolescents with dyslexia at the Summit Academy in Auckland. She is a member of a charitable trust that plans to open the Summit Point School in 2016, without government funding. 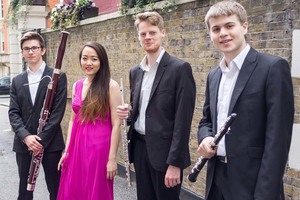 New Zealand musicians Thomas Hutchinson (oboe), Hugh Roberts (flute), Todd Gibson-Cornish (bassoon) and Somi Kim (piano) are all based in Europe, studying and freelancing in top orchestras. They perform together as the Mimosa Ensemble, and have returned to New Zealand for the 50th Jubilee Celebrations of the 2015 NZCT Chamber Music Contest (1-2 August), the longest running youth music competition in New Zealand (three ensemble members are former winners of the contest). They will perform before the National Finals on Sunday at the Michael Fowler Centre (the Finals are being filmed and recorded by Radio New Zealand for live video streaming from the websites of Radio New Zealand Concert and Chamber Music NZ, and will be broadcast later this year on Radio New Zealand Concert). The ensemble recently completed Play It Up, a ten-day music residency pilot at schools in the Hutt Valley, and are touring the country on the Chamber Music New Zealand Regional Encompass Series Tour 2015, which has seen them play in Tauranga, Wellington, Waikanae, Lower Hutt and Wanganui, with performances still to come in Motueka (4 August), Rangiora (6 August), Gore (9 August), Gisborne (12 August), Whakatane (13 August), and Kerikeri (16 August).
Here's Todd's video: Bassoon Reed Making 101

Hamish Clayton’s novel Wulf won the 2012 Best First Book of Fiction at the New Zealand Book Awards. His new book, The Pale North (Penguin), is set in 1998 Wellington, after it has been devastated by a series of catastrophic earthquakes. He will join other local and international writers and commentators at Shifting Points of View on 30 August in association with WORD Christchurch as part of the Christchurch Arts Festival (27 August to 20 September).