New Zealand’s most abundant whitebait species, inanga, is being put to the test in a swimming flume.

NIWA freshwater ecologist Paul Franklin says the aim is to find out how well inanga can swim against currents of varying strengths.

This knowledge will help Paul and his colleagues develop better fish passage guidelines and improve the ability of New Zealand’s many species of small native fish to survive – and hopefully thrive – in modified streams. 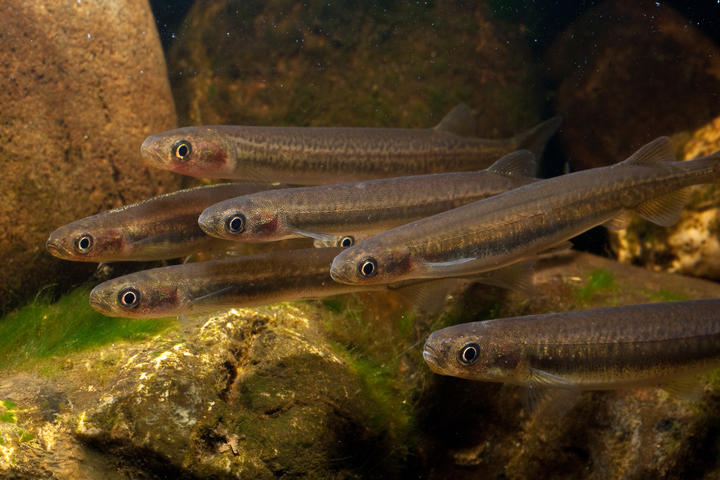 Spare a thought for small native fish attempting to navigate urban waterways. Our cities and towns are an obstacle course of underground pipes, perched culverts with no access from below and concrete channels.

It is much worse when it rains. Storm water pipes disgorge warm, rubbish-filled runoff from roofs, roads and driveways, and gentle trickles quickly swell to a raging flash flood.

With no shelter in the pipes and culverts the small fish struggle to swim against the strong currents. Many are swept away.

Many streams and rivers, meanwhile, have been modified by dams and weirs, for example, which impede fish movement, often by increasing water flow in some areas. 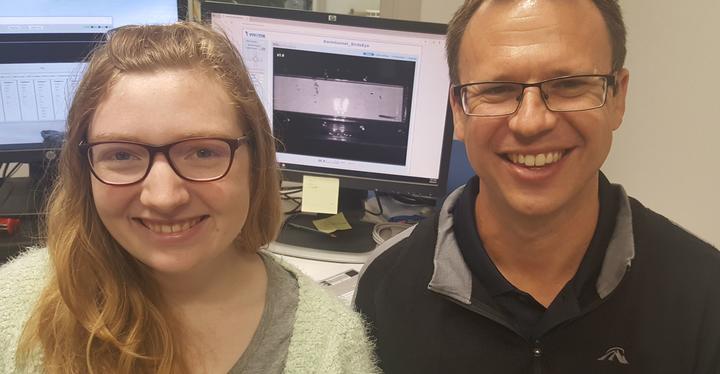 Dana Nolte and Paul Franklin in front of the screen showing an inanga swimming in the flume tank (the fish is the elongated shape at the far right of the pale rectangle). Photo: RNZ / Alison Ballance

Paul says that understanding what water speed different species of fish are capable of coping with will help with the fish-friendly design of structures to ensure the fish can move upstream and downstream at different stages of their lives.

“We want to design those structures in a better way that allows fish to get past,” says Paul.

He says the first swimming trials have been carried out with inanga, which is one of the most common native fish.

The trials are in a specially designed flume, and Paul says they run water through the flume at different speeds and see how well the fish can swim against it.

Student Dana Nolte, from HZ University of Applied Sciences in the Netherlands, has put more than a hundred inanga through their paces and found that – just like humans – they vary greatly in how long they can swim against a current for.

Dana says she has tested fish at a water speed of 0.4 metres per second and some fish were able to swim for 160 minutes before they tired.

However, at a water speed of 0.8 metres per second (or nearly 2.9 kilometres per hour) a small inanga has to swim very hard to maintain its position in the water, and it tires within a few seconds. Paul says this reinforces how fast-flowing water is an effective barrier to fish movement.

He cites the example of a Hamilton culvert which included a three metre long apron, across which water flowed at 1.4 metres per second. Fish could cope with the slower water flow above and below the apron, but not across the fast section across the apron.

In April 2018, NIWA released a set of Fish Passage Guidelines which contain best practise guidelines for how to build fish-friendly instream structures.

Find out more in these Our Changing World stories

Paul Franklin has been tagging longfin eels with satellite tags which he hopes will reveal their mysterious breeding grounds.

Greater Wellington Regional Council and Wellington City Council have been surveying the streams under the streets to find out what lives in them.

NIWA’s Eimear Egan says fish ear bones are a diary of their lives.

Bruno David, from the Waikato Regional Council, has been helping build fish friendly streams in Hamilton, including the creation of kokopu condos and tuna townhouses.