“In the Mangakotukutuku Stream we know there are good numbers of long-finned eels, so we’ve put in tuna townhouses, which are multi-level apartment blocks.”
Bruno David, freshwater scientist, Waikato Regional Council

Tuna townhouses are houses designed with native long-finned eels in mind. Then there are kokopu condos, designed as a hang-out for large numbers of giant kokopu. These houses for native freshwater fish are designed to make the lives of suburban fish a little easier.

The tuna townhouses are u-shaped flexible pipes sandwiched between sandbags. Once they are covered in dirt (right) they form part of the stream bank. Photo: Bruno David / Waikato Regional Council 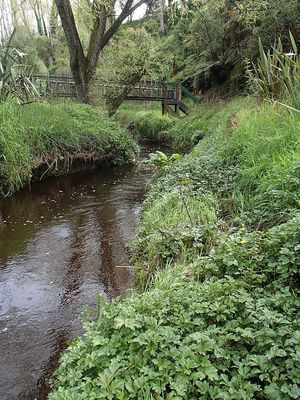 Now that vegetation has regrown following construction of the block of tuna townhouses they are almost invisible. This stream has very good quality, and the brown colour is tannin from the wetland that the stream drains. Photo: Bruno David / Waikato Regional Council

The tuna or eel townhouses are a u-shaped tunnel – with two entrances – made from a piece of flexible pipe that’s dug into the stream bank. Waikato Regional Council freshwater scientist Bruno David and colleagues came up with the concept and have installed some trial townhouses in the Mangakotukutuku Stream. The thinking behind the two entracnes is that if a giant kokopu takes up residence it will be able to make a quick escape if a larger, hungry long-finned eel decides to move in.

Bruno says this stream, which has its headwaters in a swamp, has good water quality. But like many suburban streams much of the woody debris - fallen trees and branches that provide structure and fish habitat on the stream bed – has been removed, as part of regular council maintenance to ensure flood waters have easy passage down the stream. The tuna townhouses, then, are an attempt to replace this lost structure.

“When water flows come up really rapidly and there’s no structure in the stream you can provide refuge for the fish ‘offline’, out of the flow and away from contaminants,” says Bruno.

Suburban streams are unfriendly places for native fish, prone to flooding with warm contaminated water running off impervious surfaces such as roofs, roads and driveways. So Bruno also developed the idea for the kokopu condo - a 6-metre-long pipe with a wide diameter – that would stay filled with cool, clean water, even during a flood. Not everything has gone quite to plan, however.

“It was designed to be a giant kokopu condo, but a really large female long-finned eel decided she liked it a lot better, so she’s occupied this thing for over two years now.”

The kokopu condo comprises a large vertical pipe back from the stream bank, and connected to the water by a 6-metre long pipe. This condo has been occupied by an eel for the past two years. Photo: Bruno David / Waikato Regional Council

At the moment Bruno and colleagues are still experimenting with the best designs, to ensure that tunnels don’t fill with silt, for instance. And he’s not sure how many refuges they might need to install before there are enough eel-free ones for giant kokopu to move into.

The Mangakotukutuku Stream Care group has done a lot of riparian planting along the stream as well as taking advantage of a spring to create a wetland habitat into which mudfish have been introduced. NIWA and the Waikato Regional Council have done a lot of research into the stream's fish, most of which carry tiny PIT tags that can be detected on  special aerials, allowing the movement of the fish to be monitored.