It’s whitebait season, and all around the country tiny fish – the juveniles of five species of Galaxiid fish – are running the gauntlet.

And even assuming they make it past the whitebait nets at the mouth of the river, they’ll face many more obstacles as they swim upstream. 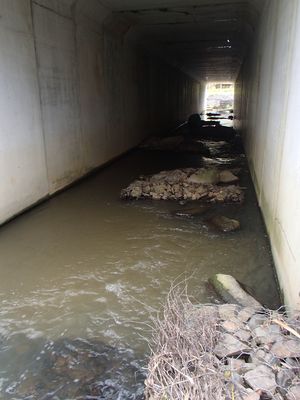 The problem is particularly bad if the stream is in an urban area, where all sorts of artificial barriers get in the way.

Concrete walls, long pipes, and culverts that move water underneath roads – these can all be insurmountable obstacles to small migrating fish.

But in Hamilton, the fish have friends at Waikato Regional Council, who are doing their best to provide ‘fish passages’ to help the scaly commuters past those blockages.

Fish ladders are an existing technology that works well, but they can be expensive – and they don’t work in all situations.

The challenge in large pipes and culverts is water being channeled down a smooth concrete surface. A simple solution to this is to install baffles; these break up the water flow and provide gentle eddies where the fish can rest.

Bruno David from Waikato Regional Council says a herringbone pattern of gabion baskets, filled with rocks, is one way to do this. 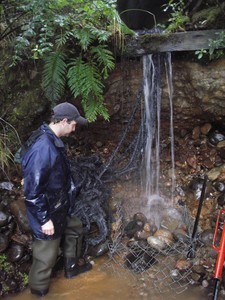 Environment Waikato scientist Mark Hamer installs polypropylene rope in a perched culvert. The rope is connected to a gabion basket in the stream bed, designed to prevent it eroding further. Photo: Environment Waikato

Perched culverts are particularly challenging – these are culverts that hang out into space, creating a sheer waterfall.

But a few years ago, Bruno and fellow fish scientist Kevin Collier, now at Waikato University, had a eureka moment in the field.

“We found a waterfall where roots were coming out of a big pohutukawa tree and growing over a big rock wall, down through the water,” says Bruno.

“When we peeled the roots open we found a whole lot of little eels and banded kokopu inside. We’d seen fish climbing rock walls before but we’d never seen them climbing up roots and we thought this might be a solution to the perched culvert problem, where we could use ropes rather than building expensive engineered structures like fish ladders.”

Bruno says that “some of our fish can climb really well as juveniles.”

“We talk about them having either two-wheel drive or four-wheel-drive. But … some of them almost have six-wheel drive! You have fish like koaro that can scale vertical waterfalls 20 metres high, no problem.”

So, with those pohutukawa roots in mind, Kevin and Bruno came up with the idea of hanging a mussel rope – the kind used on mussel farms – through the perched culvert to provide something for these six-wheel fish to climb up.

First, they tested the idea in the lab – and sure enough, the agile fish easily shimmied up half a metre of furry rope. 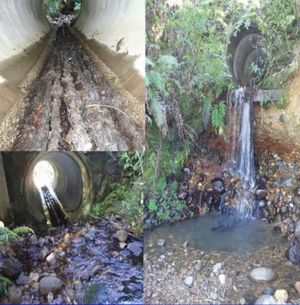 Mussel ropes have become a standard way of assisting fish passage in urban streams, and Bruno says there is an unexpected upside to this. Unlike the nimble natives, introduced pest fish aren’t great climbers, so they remain stuck below the perched culvert – it’s a good way of keeping them in their place.

Bruno is all in favour of helping urban native fish as much as possible. In a previous Our Changing World story he introduced us to the idea of kokopu condos and tuna townhouses, which are fish houses built into the side of streams to provide cover.

Earlier in 2016, he gave us a tour of the council’s Carp’N Neutral facility in the Waikato, in which pest koi carp are trapped and turned into a nutrient-rich compost that is being used in native plant restoration projects.