NIWA freshwater ecologists are trying to solve one of the great mysteries of the natural world: where New Zealand’s longfin eels go to breed.

They hope sophisticated satellite tags deployed on nine female eels in the Waikato River will reveal exactly where in the Pacific Ocean the spawning grounds are located. 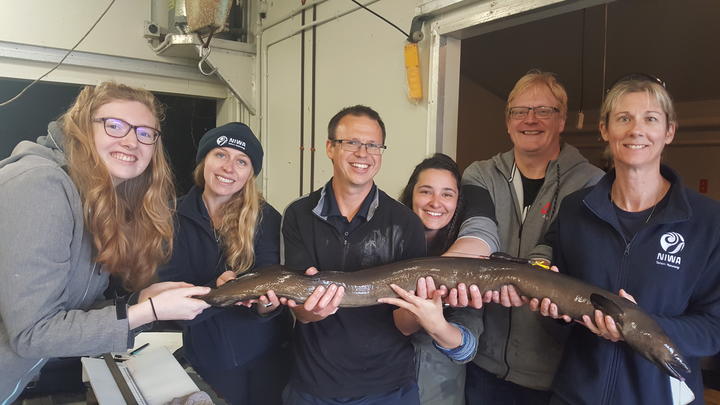 Worldwide there are 16 species of temperate freshwater eels that live in continental waters such as lakes, rivers and estuaries. New Zealand’s endemic longfin eels are the largest and longest-lived of these.

These species all breed only once, at the end of their life. They all spawn far out in the open ocean.

And we are only just starting to find out where all of them go on their once-in-a-lifetime breeding migrations. 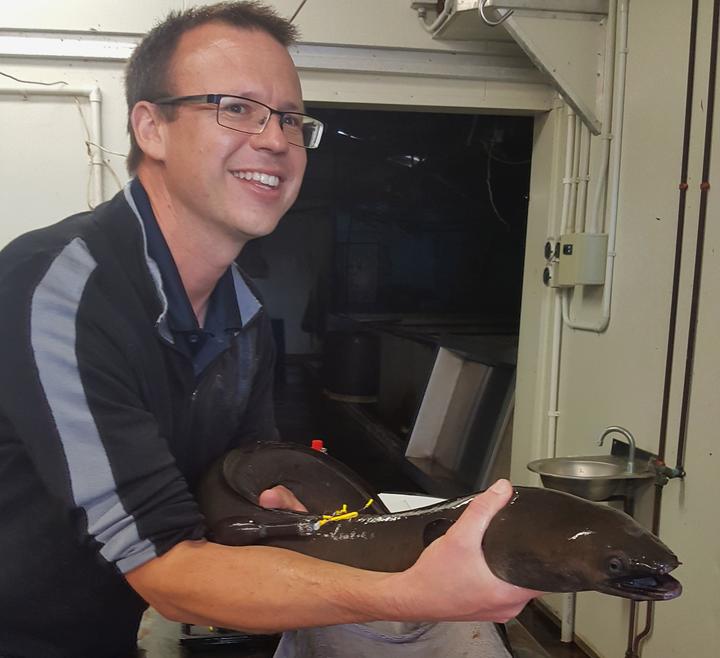 NIWA’s Dr Paul Franklin says finding out where our longfin eels, or tuna, go to spawn is a bit of a holy grail for fish biologists.

Dr Don Jellyman, also from NIWA, made the first attempts to track longfin eels back in the early 2000s. These early pop-up archival satellite tags were bigger and heavier than more modern versions, and Don had limited success with the ten he deployed.

One came off about 1000 kilometres northeast of New Zealand. The most successful tag released from the eel after a journey of 2500 kilometres, popping up 700-or-so kilometres east of New Caledonia.

This huge area between Tonga and New Caledonia seems the likely breeding zone but Paul is hoping to get a more precise location. 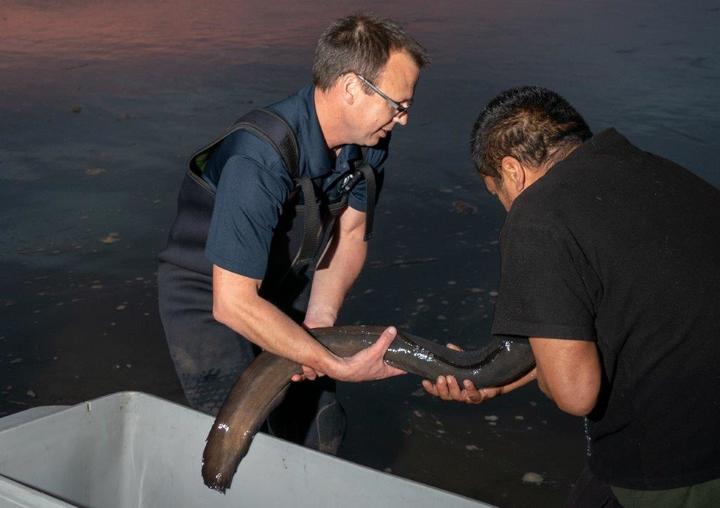 On average, migrating temperate freshwater eels swim at about one kilometre an hour, which means they cover about 24 or so kilometres a day. Some slow ones may travel as little as two kilometres in a day, while others cover up to 50 kilometres a day.

European eels, for example, cross the entire Atlantic Ocean. At that average swimming speed it will take them seven months to cover 5000 kilometres. And spare a thought for the Norwegian eels that have to swim up to 9000 km to reach the Sargasso Sea spawning area. 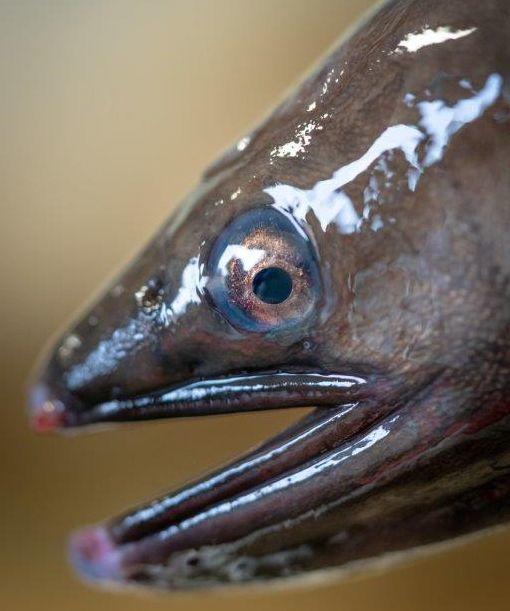 Even if our longfin eels aren’t swimming quite that far, they’re still swimming at least 2500 kilometres.

New evidence suggests that, contrary to previous beliefs, the eels almost certainly don’t breed until the year after they migrate

The females leave here in April and May and the first glass eels come back in August which is not enough time for mum to swim there, spawn and have her tiny larvae drift back in the same year.

Don’s previous research, and similar research on a number of other temperate freshwater eels, has shown that migrating temperate eels spend a lot of time during the day in deep cold water, at depths of around 500-900 metres. At night, they come up into warmer shallower water, just 100-200 metres deep.

Researchers think there may be several reasons for this. Avoiding getting eaten is a big one. Studies with northern hemisphere eels have shown that predation is a huge risk, with up to three quarters of tagged eels getting munched en route.

The female eels are also juggling temperature and pressure, trying to time when their ovaries mature with maintaining a comfortable temperature during their long swim.

PSAT, or Pop-up Archival Satellite tags, collect information on light, depth and temperature. The tags release from the eel at a predetermined time and pop-up to the surface where they send data back via satellite. Photo: Stuart Mackay / NIWA 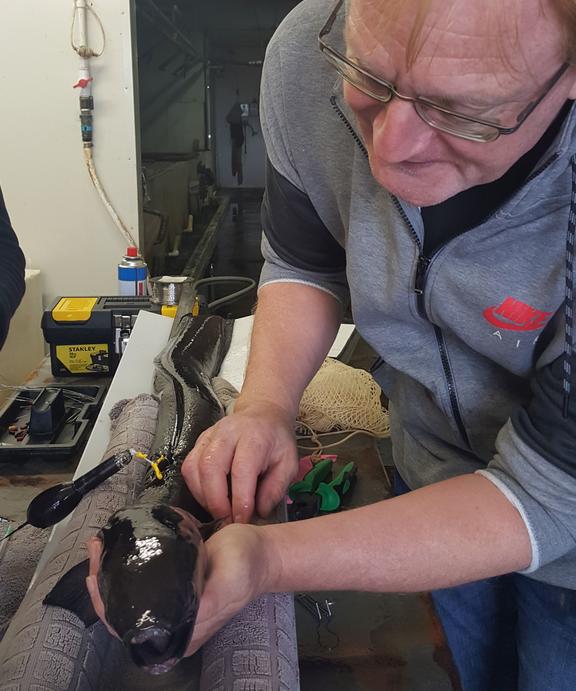 Kim Aarestrup with a tagged female longfin eel. The satellite tag will sit streamlined alongside the eel's body as she swims. Photo: RNZ / Alison Ballance

Professor Kim Aarestrup, from the Technical University of Denmark, has been in New Zealand helping NIWA with the eel tagging. The New Zealand longfin eel is the seventh eel species he has tagged. He describes it as the ‘king of eels’ for its large size (up to two metres long and weighing up to 25 kilograms) and longevity (living from 40 to more than 70 years).

Only female eels have been tagged as they are significantly larger than males and are better able to cope with the small amount of drag that the tag causes. Paul plans to tag a tenth eel in the Waikato this year.

Paul says the tags have been programmed to release over five to eight months, and even if some tags fail or come off early he is hopeful of getting enough data to solve the mystery of the eel spawning grounds.

A team of Australian researchers has recently tagged a number of shortfin eels in south Victoria. This is the same species as in New Zealand, and Paul says it will be very interesting to see where they migrate to spawn.

Listen to NIWA freshwater ecologist Eimer Egan talking about using eel earbones to find out information about their life history.