The streams beneath the streets

Next time you’re out and about, walking or driving, have a think about whether there might be fish under your feet.

If you live in a New Zealand town or city, chances are that many of the streams that once flowed down forested hills and along swampy valleys are now running through pipes under suburban footpaths and roads.

We think of these pipes as storm water drains, but to fish they are still a stream.

And in Wellington, freshwater ecologists are discovering that eels and fish are definitely living in, and travelling along, these piped streams, which can run underground for kilometres. 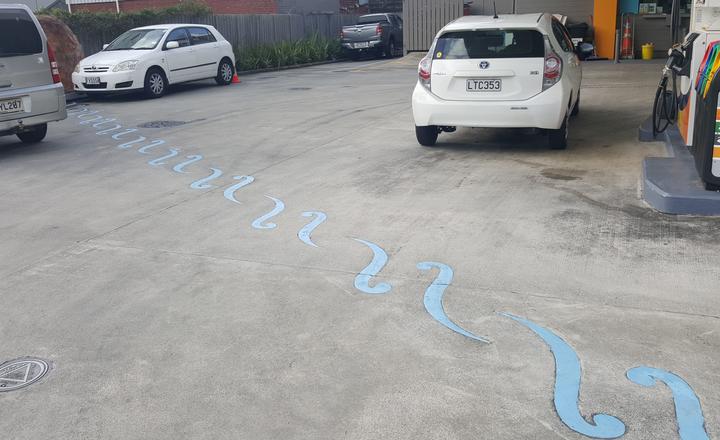 The route of the Waimapihi Stream, which starts in the Aro Valley and runs underground through central Wellington, is marked out on a service station forecourt. Photo: RNZ / Alison Ballance 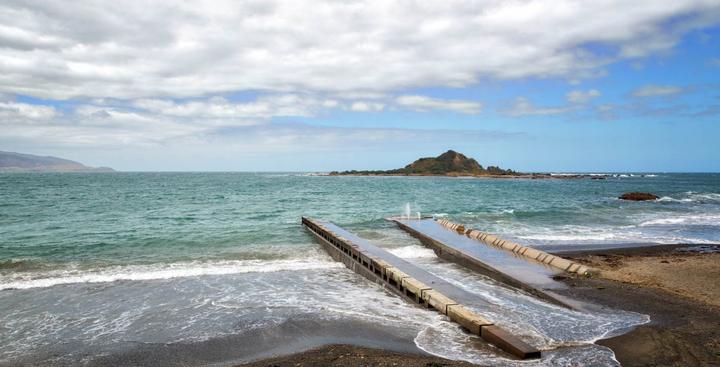 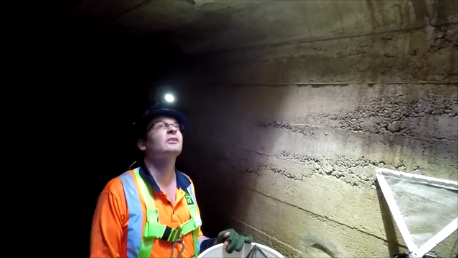 A small longfin eel approaches the beach at Island Bay on Wellington’s South Coast. It has been at sea for months, drifting from its mysterious breeding ground in the central Pacific.

It senses freshwater and heads towards the beach where a small trickle of water runs into the sea. This watery trail leads into a large concrete culvert, one of two that disgorges storm water from the surrounding suburb.

The eel disappears into the cold, dark pipe, seeking Paekawakawa Stream, which has all but disappeared except in its headwaters, near Macalister Park, in a small patch of regenerating bush.

This is the only part of the stream that sees sunlight these days. For much of its length the stream is piped underground, running the length of The Parade. 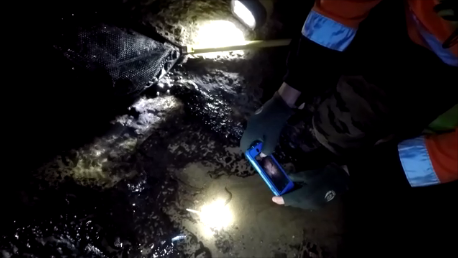 Alex James takes a photo of a small eel living in shallow water in Paekawakawa Stream, which is piped for most of its length in a large culvert under the streets of Island Bay in Wellington. Photo: RNZ / Alison Ballance

Most of the time there is just a shallow trickle of water running along the floor of the pipe which reverberates with the hollow thump of waves rolling in from Cook Strait to smash against the pipes at the beach. Cars, trucks and buses rumble overhead.

The eel finds a slightly deeper pool, where sand and gravel have accumulated.

The pool already has two other eels in residence, and the newcomer settles into the sediment nearby, careful to keep its distance.

A couple of metres away a small shortfin eel hides under a broken brick, which swept into the pipe during a heavy downpour a few years earlier.

Usually tranquil, the two-metre diameter pipe becomes a raging torrent of flood water and rubbish when it rains heavily. 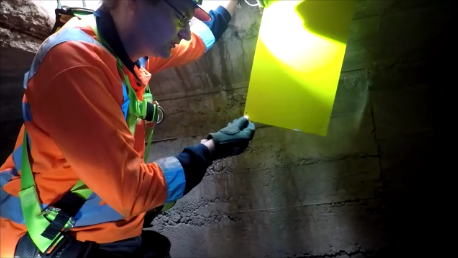 Alex James checks a sticky trap hung in a piped stream to see if it has caught any flying insects.The stream is usually completely dark. Photo: RNZ / Alison Ballance

Plastic, spilt fuel, cans and drink bottles discarded in the gutters all make their way to the sea in a fast flashy flood as storm water pours off roofs, driveways and roads.

With only a few places to hide, the eels have to fight to avoid being swept out to sea.

But survive they do, eking a living from other small fish and insects that make their way up the pipe. 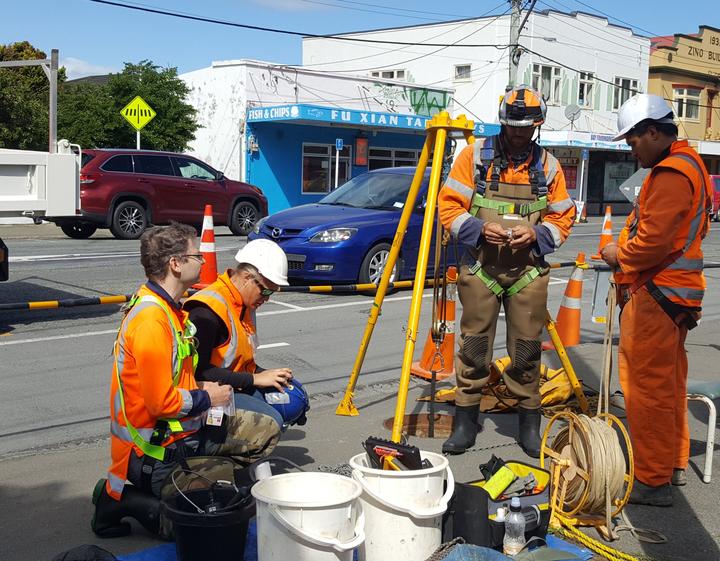 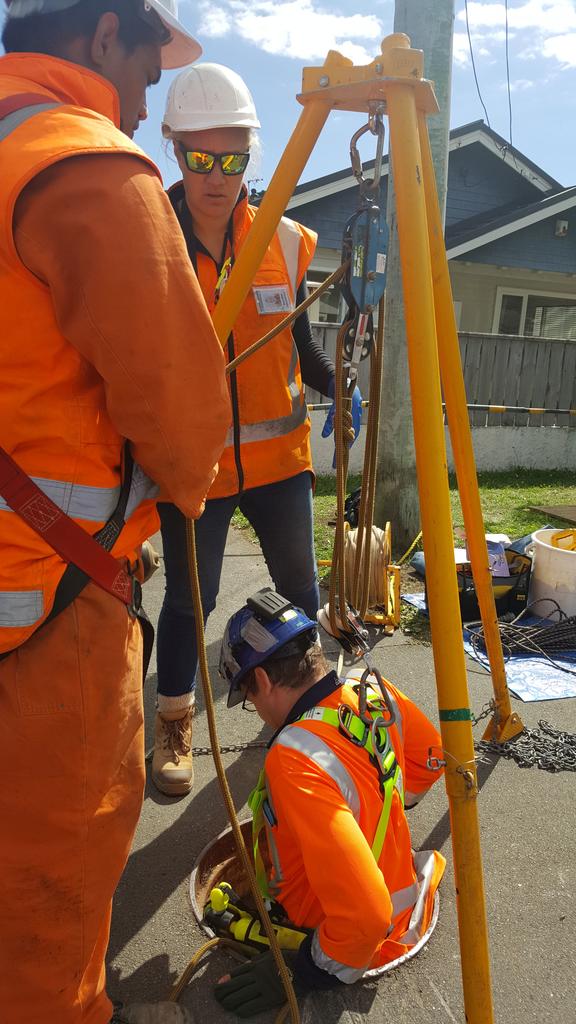 Freshwater ecologist Alex James is lowered through a maintenance hole in the footpath to reach the piped stream below. Photo: RNZ / Alison Ballance

Paekawakawa Stream is one of six piped streams that are being surveyed as part of a wider monitoring project to determine what is living in Wellington’s urban streams.

The project has been initiated by Greater Wellington Regional Council and Wellington City Council and is being run by freshwater ecologist Alex James from EOS Ecology.

With the help of the Wilkie whanau, who run Silver Lining Contracting, Alex has been lowered down many maintenance holes into pipes to carry out standard freshwater surveys.

He samples for macroinvertebrates, spotlights for fish, and leaves sticky cards to catch flying insects. He leaves remote triggered trail cameras in the hope of snaring photos of fish. He makes two visits to each site.

Alex has been impressed with what he’s found. In a two hundred metre transect along the lower reaches of the pipe under The Parade he found 15 eels, including two shortfins.

In another pipe running into Evans Bay he found a small whitebait.

As a result, Alex and Greater Wellington freshwater scientist Evan Harrison are coming up with ideas for how to make Wellington’s piped streams more fish friendly.

“We’re thinking about treating them as streams rather than storm water drains,” says Alex.

They are wondering about ways of providing hiding places where eel and other fish can shelter, particularly during floods.

They are also urging people to be very careful about what they spill or drop on footpaths and roads around the city, as this all washes off with storm water, eventually making its way along an underground network of streams to the city’s beaches.

Tracking longfin eels to solve the mystery of where they breed in the Pacific Ocean.

A citizen science project to study plastic in urban streams.

How fish ear bones are a diary of where a fish has lived and what it’s eaten.

Fish-friendly city streams and how to improve unfriendly streams.

Daylighting an urban stream in Auckland.