NIWA freshwater scientist Amanda Valois carries a small bucket whenever she goes out these days. She fills it with rubbish that she picks up on her walks, paying attention to the different kinds of plastic and noting where they have come from.

These walks often take Amanda to local streams in Hamilton, especially after rain, where she investigates what plastic has washed out of stormwater drains on its way to the sea.

And in a few month’s time she hopes to have groups of eagle-eyed citizen scientists doing the same thing down the entire length of Wellington’s Kaiwharawhara Stream. 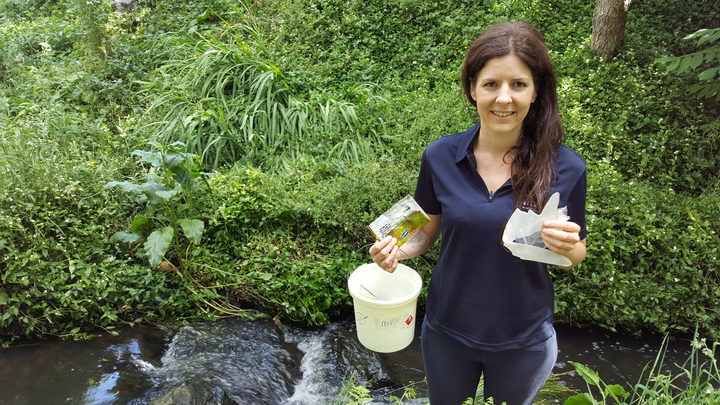 Amanda Valois in Hamilton's Donny Park holding mostly plastic rubbish she picked up along the 100 metre walk from the road to the stream. Photo: RNZ / Alison Ballance

Amanda’s research area is “in citizen science and how we can involve communities more in scientific research. And so, because plastic is a hot button topic, my aim is to work with communities to come up with a solution to the plastic crisis.”

She will be running her project in the Kaiwharawhara catchment in Wellington, which begins as a pristine stream in Zealandia ecosanctuary. It then winds its way down through suburbia and a commercial zone before arriving in Wellington harbour, by which time it is carrying a lot of rubbish.

“Down by the estuary mouth, where it is probably at its worst,” says Amanda, “in a 10-metre stretch I found just over 1500 pieces of rubbish.” 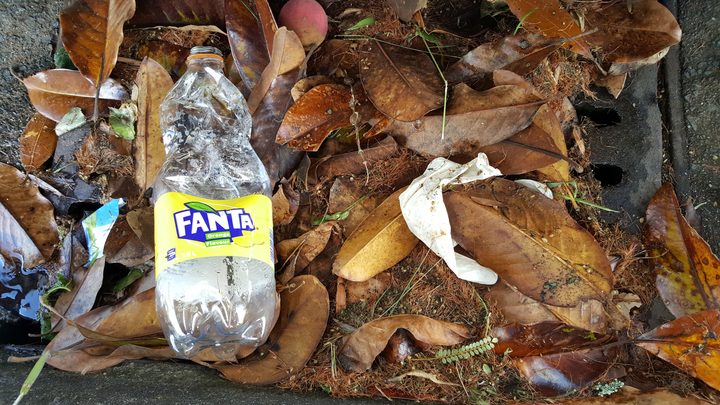 Plastic rubbish in the gutter of a Hamilton Street. From here it will wash into the nearby stormwater drain which leads directly to a local stream. Photo: RNZ / Alison Ballance

Large unsightly pieces of rubbish – everything from road cones to drink bottles – are what first catch your eyes, but Amanda says there is increasing evidence of the detrimental effects of tiny microplastic on aquatic life. And microplastic is the result of large pieces of plastic breaking down in the environment over time.

Most rubbish doesn’t remain in streams and rivers. It washes out to sea, where it becomes a threat to marine life. Amanda says that although fishing boats are responsible for some rubbish, about 80 percent of plastic pollution in the world’s oceans comes from the land. 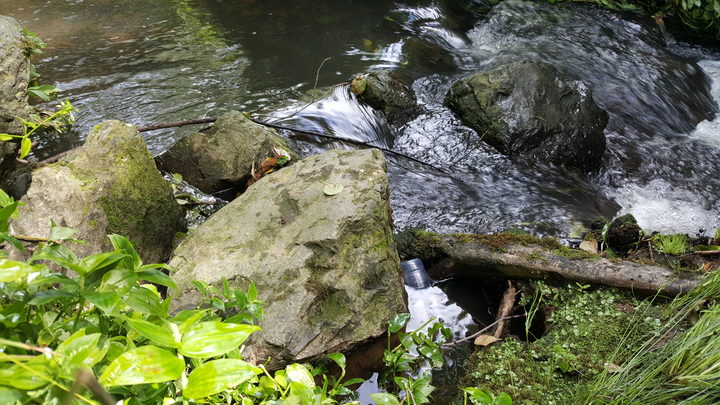 A plastic drink bottle and a soda can, trapped amongst rocks in an urban Hamilton stream, en route to the Waikato River and the sea. Photo: RNZ / Alison Ballance

The solution, says Amanda, is not to try and clean up the ocean, but rather to prevent plastic reaching it in the first place.

To do that, she is enlisting the help of citizen scientists to collect rubbish from the Kaiwharawhara Stream in an effort to work out where it comes from.

Once the community knows whether it is plastic recycling that has blown out of bins on a typical windy Wellington day or litter discarded by people, or whether – as is the case overseas – it comes from artificial turf and car tyres, it can begin to come up with ways to prevent the rubbish reaching the streams in the first place.

What it comes down, says Amanda, is that “we as individuals are the solution to the plastic pollution crisis we’re facing.”

Our Changing World has featured a number of research projects that are developing new bioplastic alternatives to plastic made from petrochemicals.

From poo to plastic