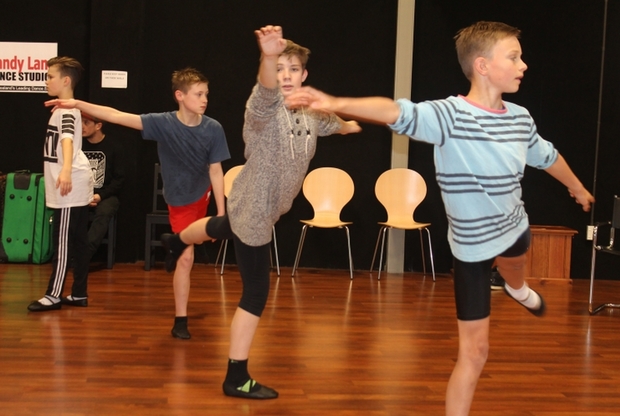 It might be school holiday time but there’s no break for the child performers cast in Auckland Theatre Company’s (ATC) production of Billy Elliot the Musical. 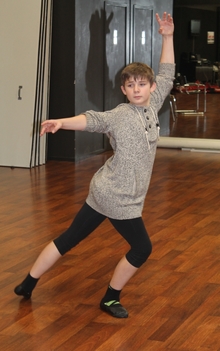 Stanley Reedy, 14, is from Westport. He performs the role of Michael. Photo: RNZ/Justin Gregory

The six young boys, aged between 10-14, are hard at work in an intensive, two-week workshop preparing them to play the roles of the ballet-loving Billy and his best friend Michael.

Daniel Bridgman, 10, is from Christchurch and will play the second lead role of Michael in rotation with two 14-year-olds – Stanley Reedy from Westport and Christian Swan from Auckland.

The roles are shared to ensure the performance workload isn’t too great for any of them.

Billy Elliot the Musical grew out of the film of the same name and tells the story of a working class boy in the north of England who defies the expectations of his family and community by deciding to take ballet classes instead of boxing lessons. 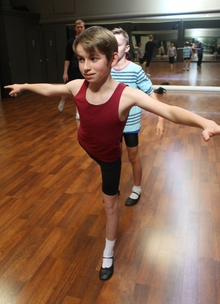 The musical, which opens in October, will mark the first production to be staged in ATC’s newly built ASB Waterfront Theatre as well as the first time the show has been performed in this country.

The difficulties Billy faces in wanting to dance are matched by the tough schedule the boys have to follow in the workshop.

Each day begins with tap dancing lessons followed by ballet. After lunch the afternoon is filled with acting and singing classes. At night, there is homework in the form of acting exercises and self-directed practice to get the big dance numbers right. 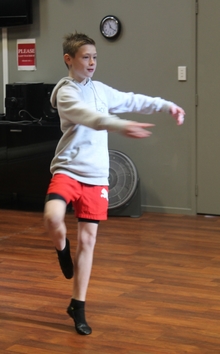 Four of the boys live outside of Auckland and along with a parent each, are living together in a rented home in Point Chevalier.

Thoughtfully, ATC have installed a dance floor in the garage to encourage any urges the boys might have to work even harder.

“I’ve worked with kids for many years and I believe that you can ask as much as the kid is prepared to do” says choreographer Malia Johnston.

“If they’re interested, then they are capable of learning at a faster rate than adults.”

Johnston takes the boys for ballet lessons and will choreograph the dance numbers in the show. At the Candy Lane Dance Studios in Mt Eden, she watches closely while tap teacher Richie Cesan conducts the class. 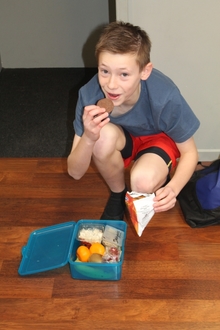 “Some of them have learnt tap but tap’s not that common in New Zealand so we are training them from scratch.” Johnston says.

“Some of the boys had not done much ballet. They’ve done lots and lots since they knew they were under consideration for the show. Some of them up to 14 hours a week.”

McColl says there are real differences between working with child performers as opposed to adults. A chaperone must be present during rehearsals and performances and there is a set number of hours a child is allowed to work each day.

Christian Swan, 14, from Auckland, will play the role of Micheal. Photo: RNZ/Justin Gregory

Often younger performers will want to work beyond those times and that enthusiasm needs to be managed.

“So we’ll be looking at where they need to change into a game to re-energise, or perhaps have a rest, go and have a snack. And each kid is different."

Colin McColl says the nature of rehearsing a musical allows for breaks and variety that helps keep the children interested and engaged.

“Rehearsals are split up into dance rehearsals, music rehearsals and scene rehearsals. We can rotate the three sets of boys around so that’s an advantage.

“It’s the adults that have to do each scene three times that end up learning their parts really, really well.”

Rehearsal rooms for big shows can be quite robust environments. McColl acknowledges that, but says he doesn’t think he needs to rein himself or anyone else in.

“As rehearsals go on, things get more stressful and can get more animated, shall we say. I think these boys will be fine.”

As for the six boys themselves, they are all very clear about why they are here and what they want to get from the Billy Elliot Boot Camp.

“I want to feel really comfortable in my role” says Ben Shieff. “To learn as much as I can in the shortest amount of time.”

Harry Sills agrees and says he can’t wait for rehearsals to start properly. But he is slightly more cautious when it comes to opening night.

Billy Elliot the Musical opens on 7th October at the ASB Waterfront Theatre in Auckland.