Walking in Their Shoes

"Being a refugee is hard"

On a brisk winter day, almost 100 Sumner School pupils and their parents set off to experience life as "refugees". 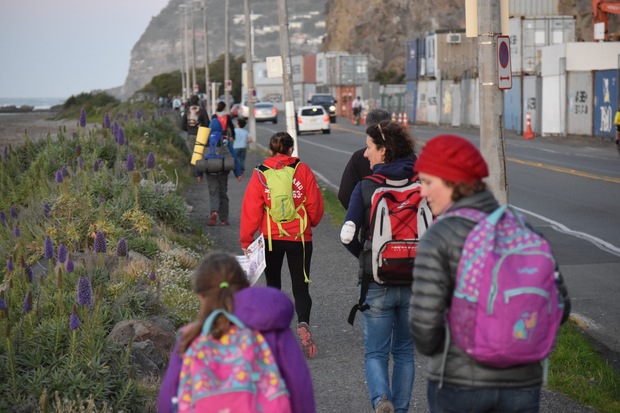 Pupils and their parents coming down the home stretch as they head into Sumner Photo: Supplied

They had backpacks, a day's worth of food and bedding so they could sleep on the floor of their school hall.

They could walk from one of three locations: St Martins, Woolston or Ferrymead, stopping at intervals to rattle their fundraising buckets in support of the displaced Syrian families. 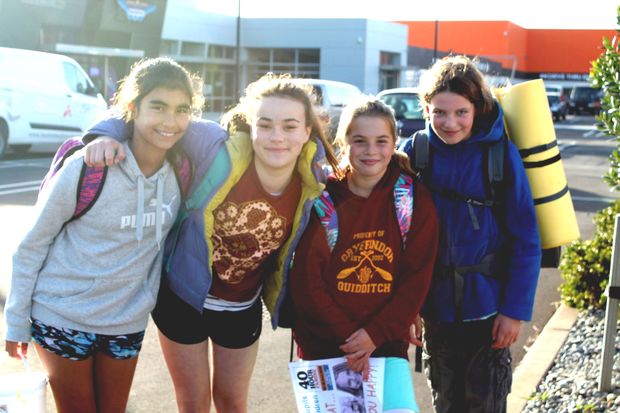 Pupils from Sumner School in Ferrymead preparing for the walk to Sumner Photo: Katy Gosset/RNZ

And, along the way, the tiredness began to kick in.

"We are doing a 12 kilometre walk - that doesn't sound a lot but it is," said Pearl.

Her friend Emily felt that her legs were "falling off'" by the time they had covered about 10 kilometres.

And Victoria, who was walking with them, noticed they were also attracting attention from passers by.

"It's very tiring walking around [with] people looking at you strangely." 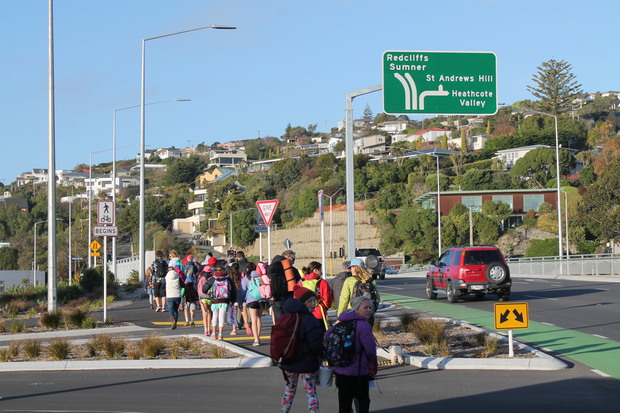 The group heads from Ferrymead towards the causeway across the estuary Photo: Katy Gosset/RNZ

Tessa agreed that seeing people looking curiously at the group was "kind of creepy".

But they agreed that it was easier than anything than the refugees in Europe might be contending with. 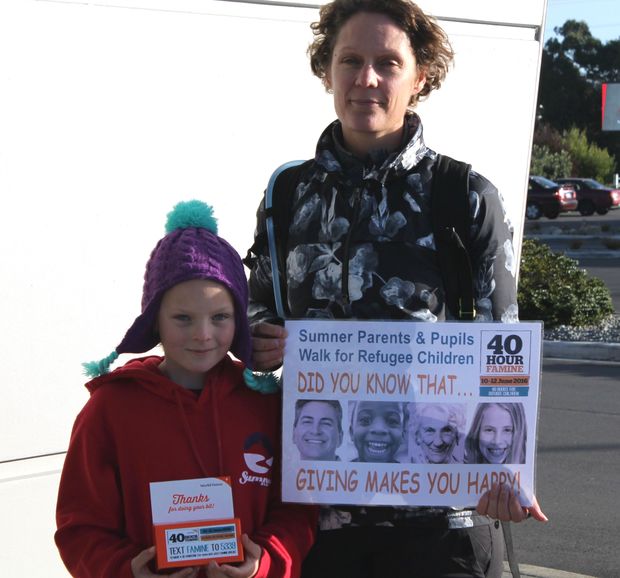 Pearl: "We've only walked for half a day but they would walk for a week."

Isolde: "I guess they'd say this was easy, compared with what they had to do."

"Would you like to donate to help Syrian refugees?"

A small boy made the plea at a suburban supermarket in Christchurch. In his backpack he had clothing as well as his favourite toy cow to remind him of home. 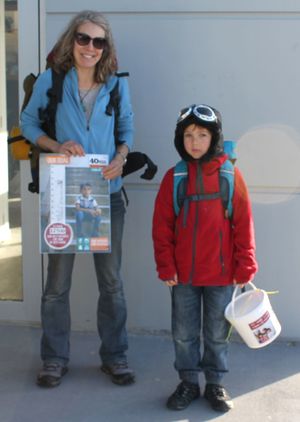 Dan had already walked about six kilometres and was about to cover the same distance again. He admitted he had food to eat along the way and he hoped the sleepover at the school hall would be fun. But he realised that being a real refugee might also be "scary".

His mother, Vicky, said it was a good idea to emulate the refugee experience although the walk was "a picnic" compared with what refugees faced.

"When you stop and think about the reality for those families in Syria, it's heart breaking."

But she had noticed that smaller children were finding it much harder to keep up with the group and were lagging behind. And she said, in a genuine refugee situation, that could create problems.

"Maybe you'd have to think about splitting up as a family  so one stays with the slower children and the other moves forward and you make those really difficult decisions." 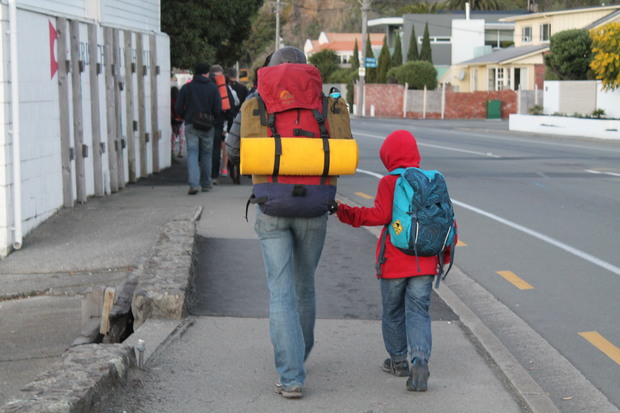 As the walk continued, some of the younger children lagged behind and parents observed that, in a genuine refugee situation, this could lead to families getting separated. Photo: RNZ / Katy Gosset

The walk was run by a Sumner School parent, Jenny Cunningham, and raised more than $2600 for World Vision. She said she hoped the event would make the pupils think about what refugee children were living with. 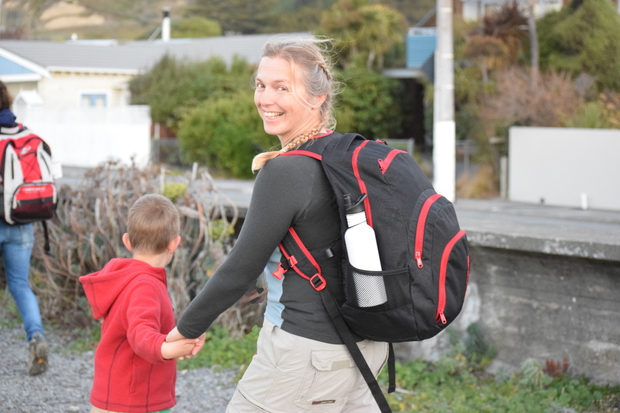 Part of the challenge for children was to carry what they needed on their backs.

Bridie: "I've got a lot of food for a day and I've only got ...one drink bottle but I haven't really been thirsty that much so that's good...

"We're only allowed to eat and drink and use what we packed - that's how the refugees did it." 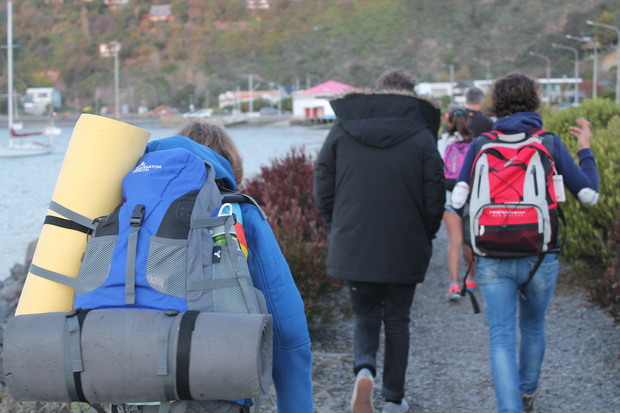 Part of the challenge for pupils was carrying all their own gear on their backs Photo: Katy Gosset/RNZ

However, children could also give a donation to share a hot "refugee meal" of rice, creamed corn, baked beans or macaroni cheese at the school hall, served by volunteers. 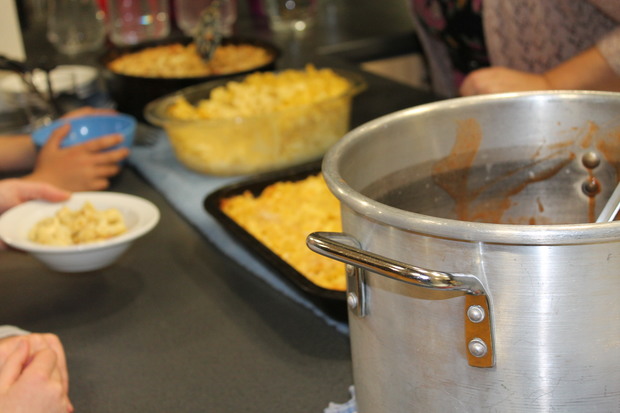 Arriving at the school hall, the "refugees" could pay a donation for a hot meal prepared by volunteers Photo: Katy Gosset/RNZ

World Vision New Zealand Chief Executive Chris Clarke joined the group for the last few kilometres. He had recently returned from visiting refugee camps in Jordan and explained that the back pack challenge came from seeing children playing sport while wearing their backpacks.

"We asked them why and the sadness of it was that they were worried that the bombs would come again, that they'll be disturbed again, so they want to make sure that they've got those precious things already on their backs in case they need to run." 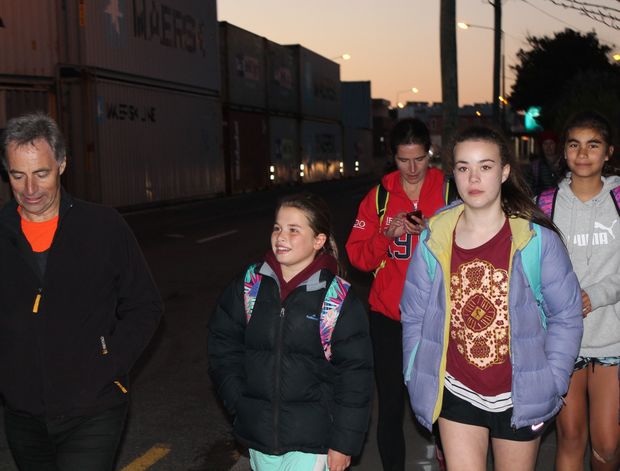 The CEO of World Vision, Chris Clarke, walks the last leg of the trip with pupils as night falls Photo: Katy Gosset/RNZ

After a handover of the fund raised, Mr Clarke talked to the group about what he'd seen in the refugee camps.

Jenny Cunningham said she was pleased with the children's interest in the discussion.

"The kids just seemed to listen so well to what it was all about which was the most important thing to me and [it was] really fantastic to have raised a good amount of money." 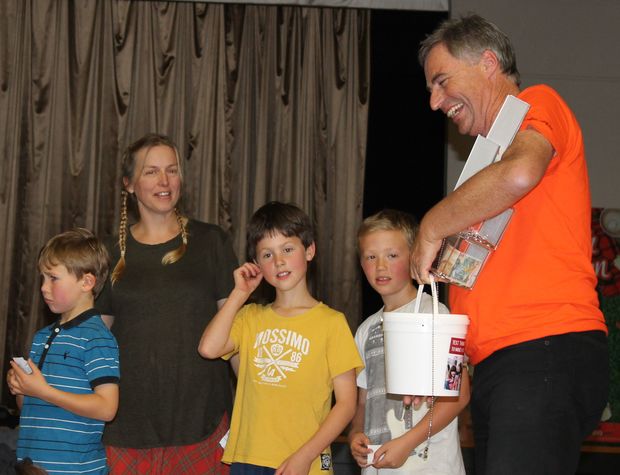 The refugee experience continued with a night on the floor and a hasty departure the next morning as the hall was booked for another event.

While some found their beds "hard and uncomfy" Ms Cunningham thought most people got "at least a little bit of sleep".

The children and their parents then headed home on foot. 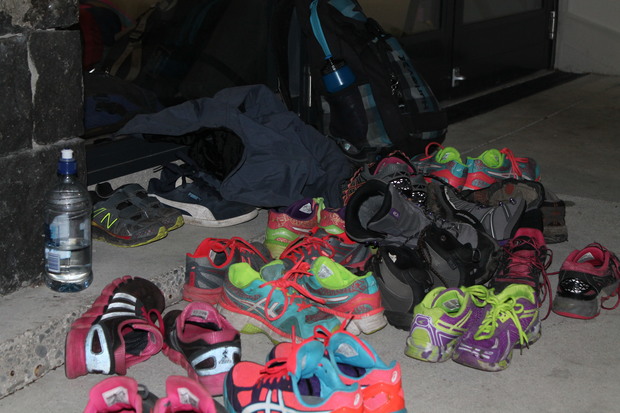 Shoes piled up outside the school hall Photo: Katy Gosset/RNZ

And while most were undoubtedly in search of breakfast, the last 24 hours also offered some food for thought.

Tessa summed up what the group learned along the way.

"I just hope that the refugees find a home, 'cos it's pretty hard."