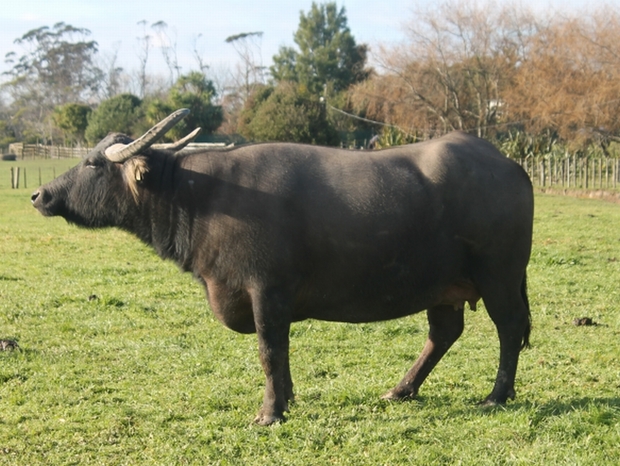 Phil Armstrong doesn't stand for any nonsense from his water buffaloes. Unfortunately, he gets his fair share of it anyway.

"They know when they've been naughty. If they've broken down one of these wires (a feeding break between different parts of the paddock), all of this side of the paddock will be chewed out."

But they will have heard us coming and they'll all be back over that side where there's no grass, going "It wasn't me!

Phil Armstrong is wiry and wry, with the dry, calm manner you expect of a farmer. He and his wife Annie Armstrong-Wills, in-laws Chris and Pam Wills and two sons operate the Whangaripo Buffalo Cheese Company from their home at Dairy Flat, north of Auckland. This is one of two sites on which they run their buffalo herds and where I meet up with him on a cold and clear winter's morning. After a hello, he leads me out to the paddock behind the house to meet the buffaloes. 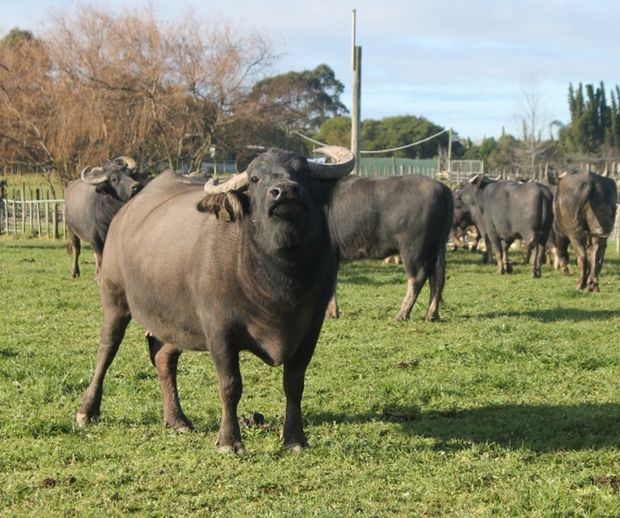 A member of the herd assesses a potential threat - the photographer. Photo: RNZ/Justin Gregory

As we approach, the herd look up and sniff the air. This is a tricky moment for the animals as it pits their natural timidity against their ever present hope that Phil might be about to feed them something special. Some run away to the far side of the paddock but a small number cautiously approach and as they do, the rest begin to trickle over.

Getting brave is what Phil, Annie, Chris and Pam all had to do when they set up the business nearly nine years ago. Phil grew up on a dairy farm but water buffaloes are not cows and he says he had very little idea about the unique nature of these animals

"There was a very steep learning process." 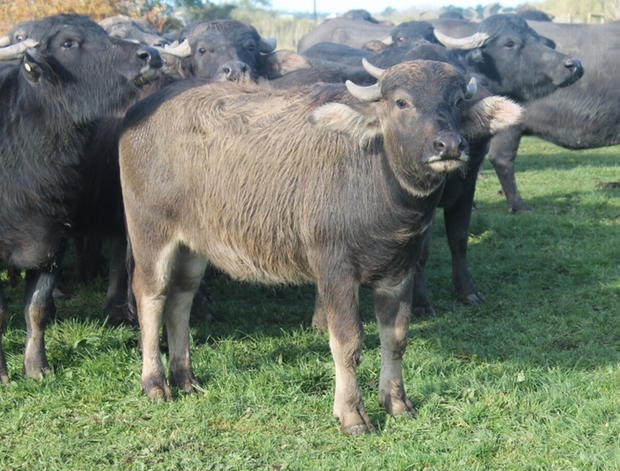 A young member of the herd. Photo: RNZ/Justin Gregory

The domestic Asian Water Buffalo is the biggest of all the members of the bovine family and has been domesticated for more than 5000 years. The species has spread out over much of the world and the original members of the Whangaripo herd came from Australia. They are are hardy animals; Phil says only twice in eight years has he had to ask the local veterinarian to come out to the farm. And as their name suggests, water buffaloes love water and will climb into any trough and bail the contents out onto the ground. Then, in Phil's words, they "make a puddle, do a little dance in it, get upside down and roll around in it".

Trees also come in for a hard time. Water buffaloes have long, curved horns which they like to sharpen by rubbing them on trunks, effectively ringbarking the tree and killing it. 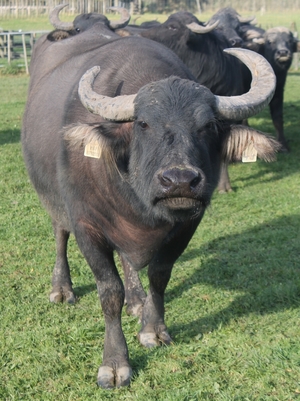 Number 44, a lead cow in the herd, doesn't care much for cameras. Photo: RNZ/Justin Gregory

They will walk straight through a standard fence.

Over years of trying to keep them where he needs them, Phil has discovered that while ordinary fences won't stop a buffalo from making mischief, they do respect electricity. "They're a big animal, very firmly grounded so a little bit of electricity goes a long way."

Buffalo are good-natured, curious animals with a strong sense of herd unity. New born calves meet all the members of their herd and should something happen to its mother, the calf will be adopted by another female. The largest bull tends to be the leader but less dominant members of the herd will take on responsibilities for keeping watch and maintaining order.

Water buffaloes do grow quite large. The biggest animal in the Whangaripo herd had a live weight of 1500 kilos and a body length greater than 2.5 metres. There is also the question of their horns...

I had a young bull who became the lead of the mob. When we were trying to push him through the gate he decided to push back a little.

The resulting gash in Phil's left thigh saw him airlifted to Auckland Hospital for emergency surgery and needing more than thirty stitches to hold his leg together. Phil says it was an "incident rather than an attack" and he was back at work among the animals as soon as he could walk. 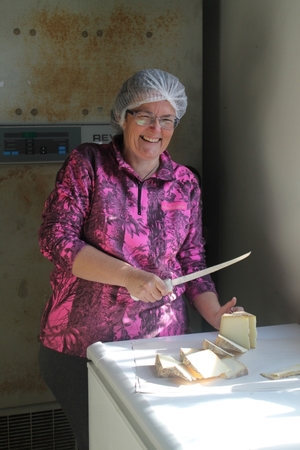 The family run both swamp buffaloes (used for meat) as well as river buffaloes for milking. The original plan was to make most of their income by selling the high protein milk produced by the animals but when that didn't go as well as planned, they quickly had to turn to producing cheese. All the cheese making is done on the farm in a converted shipping container by Annie, Pam and their helper, Jo and is sold at farmers markets and through their website. The very lean meat is made into sausages and also sold to some Auckland restaurants. Phil wants to be able to use the animals from tip to toe and he is working on a market for buffalo leather which he says is both stronger and more durable than cow hide.

At the cheese factory, Annie and and Jo are enjoying a coffee break during preparations for market.They take the enjoyment of their working day seriously and are not quite joking when they say I'm just a little bit too early to join them in a glass of wine.

Neither of the women had any experience of making cheese before starting the business but considered it a fun challenge to learn.

Fun and an agreeable lifestyle  are clearly what the Armstrong-Wills clan want most out of their life with water buffaloes. Annie argues that the people who eat the food they make need to feel the enjoyment and the love that went into producing  it.

"When we start hating it, then we shouldn't be doing it anymore." 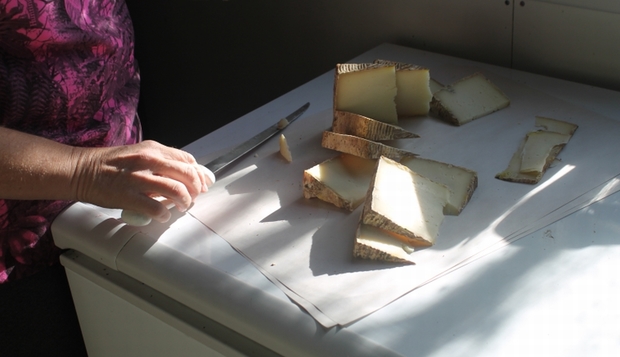