The finalists for the 2019 Vodafone New Zealand Music Awards have just been announced, with alternative artists including Aldous Harding, The Beths, Troy Kingi and Avantdale Bowling Club leading the pack. 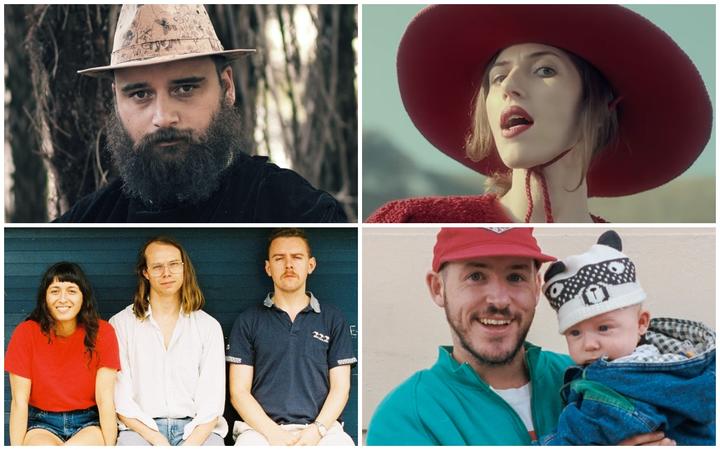 Troy Kingi, Aldoud Harding, Tom Scott and The Beths are all nominated for multiple awards at this year's NZ Music Awards Photo: Supplied

And the finalists are...

Indie pop band The Beths have been nominated in an impressive five categories this year: Best Alternative Artist, Best Group, Breakthrough Artist of the Year, Album of the Year, and Single of the Year for ‘Little Death’.

The Beths released their critically acclaimed debut album Future Me Hates Me in August of 2018. It includes the Silver Scroll-nominated song ‘Happy/Unhappy’.

Folk-pop musician Aldous Harding is a finalist in four categories: Best Solo Artist, Best Alternative Artist, Album of the Year for Designer, and Single of the Year for ‘The Barrel’, which is also nominated for New Zealand’s top songwriting award, the Silver Scroll.

Aldous released her third album Designer earlier in 2019. Her 2017 album Party was a chart-topper and earned her two NZ Music Awards that same year – Breakthrough Artist of the Year and Best Alternative Artist).

Benee’s debut single ‘Soaked’, released in September 2018, has been streamed over 24 million times. She released her debut EP Fire On Marzz in June this year and she’s been touring extensively in New Zealand and abroad.

The project was three years in the making, but only took one week to reach #1 in the NZ Album Charts.  Tom describes it as ‘a self-help book addressed to myself’.

Troy is on a mission to create 10 albums in 10 years in 10 different genres. His third and latest instalment is 70s roots reggae album Holy Colony Burning Acres, a deeply personal and spiritual examination of the plight of First Nations peoples around the world.

Founded by the legendary Kora brothers Brad and Stu, L.A.B. are finalists for Best Group and Best Roots Artist. The group have established a name for themselves as a cornerstone of the Kiwi summer circuit.

Their unique blend of soulful-rock and electronic-funk continues on their second album L.A.B II released at the end of last year.