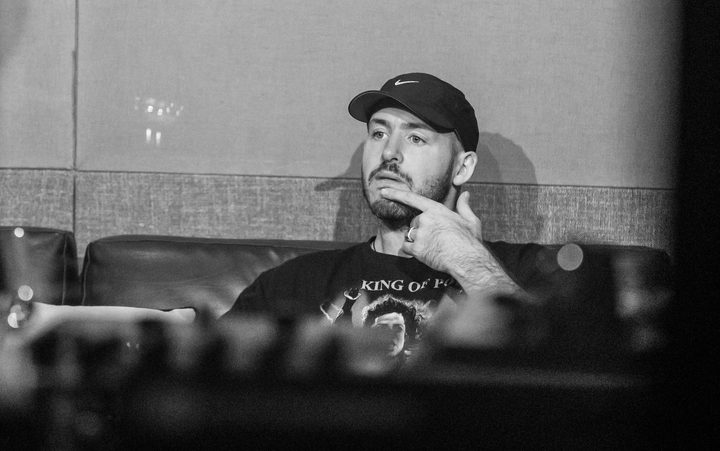 Tom's been in a few bands now. Home Brew is defunct, as is @Peace. Average Rap Band are still active.

His new eight-track album Avantdale Bowling Club was creatively fueled by a stint living in Melbourne, and is clearly the result of a lot of planning and consideration. It’s conceptually ambitious, features some of New Zealand’s finest musicians, and might be the most accessible thing Tom’s ever done.

It debuted at #1 on the New Zealand albums chart, only losing the top spot on the international chart to pop behemoth Ariana Grande.

“It was a nightmare bruv, honestly. I’m so happy I’m out the other end, but making it was psychological warfare”.

This is Tom’s response as I pore over the album’s credits. I just commented on how many musicians were involved (at least twenty), and what a huge undertaking it seems.

“I had to become a better director, a better orchestrator,” he tells me.

“I had to tell my heroes what to do, and it was really fucking hard. But learning that was what it took to make this record.” 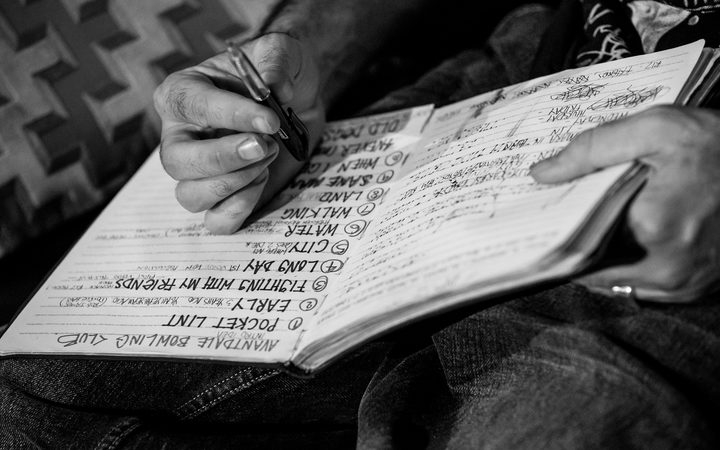 Tracks were started by creating loops in his home studio, before bringing them to some “monster musicians” to be musically fleshed out. It’s very much a jazz album. Traditional song structures are left behind for the most part so that Tom can lyrically take flight, spilling out his thoughts in a way it would be tempting to call stream of conscious, if that didn’t undersell its eloquence.

Only one track comes in under five minutes.

“It’s a different approach,” he says, “a different attention span. That’s how I like to write, and I think that’s the only way I can write. I can’t structure my thoughts into sixteen bars. I just like to let my consciousness free, and jazz seemed like the perfect canvas for that.”

"It was just hard to say ‘produced by’ because it was so much more than just one guy, you know?

"It [started with] me and Dicky, he was messing with some stuff in the little studio at my house. He’s a welder. He’s been in a tunnel building the Auckland motorway for twelve hours a day, and then he comes over to my house and I’m like ‘bro, make me a beat, make me something!’

"And he loops up a beat and adds some stuff, and then there’s a skeleton, and it turned out to be that song.

"I had some words to it, and a similar flow pattern, and then I was driving in my car one day, and I just had the thought ‘I should do a song where it’s one year at a time’. I was like ‘damn I need to rewrite that whole song’. So I had to go back and rewrite it.

"So I took that skeleton from Dicky into the studio, and brought in Julien [Dyne, drums], Tom [Dennison, bass] and Guy [Harrison, piano], and they did what they did with it.

"But yeah, that’s what I mean by ‘conceptualised’, ‘cause so many people had their hands in it.

"We had this woodshack at the place I was staying, and that‘s where I wrote ‘Pocket Lint’. I changed it through the process, but yeah it was like ‘end of the month and I gotta pay rent’. Yeah, it was just me being broke, and scared.

I’m always surprised how FEW musicians talk about their (lack of) income. Does “can’t even afford a home in my homeland” mean more now that you have a son? Is it something you think about more?

"Yeah, I think a roof should be a universal human right. Long as we still got race courses we got space for us all.

"I don't think the average person really understands how broke musicians really are though. None of us can survive doing this. I couldn't have made this album without income I made doing other things."

"That was a song I had already written to another backing, and then I brought it to Haz Beats, and Frank Keys of Yoko Zuna. They work together like some kind of entity. When they’re together they’re like a super-mind. They just gel. Frank came up with those arrangements, and we got in a string section to play them.

"One of my close friends who got caught up in drugs killed himself, and I swore to myself ‘never let that happen to anyone else’.

"They need the love the MOST these guys! So I just wanted to say ‘this one’s for you bruv’, and I didn’t need to say any names ‘cause there’s multiple people it could be about. And I wanted to talk some of my other friends who might be going down that path out of it.

"I wanted to make an ode to the people who get forgotten. If you’ve got friends who are hooked on any kind of drugs, just hit them up. That stuff’s self-fulfilling, and it perpetuates that ‘no one cares about me’ attitude.

"You lock yourself in your room, you come down again, then you just want to spiral some more."

"And then also, my parents were drug addicts. Not to throw them under the bus again like I have for my whole career, but they were, and they needed support. My dad still needs support.

This one’s conceptualised by K Saba from Young Gifted & Broke.

"He’s brilliant. He’s of Sri Lankan origin, and lives in Canada now. I think a lot of his melodies, you can hear his ancestors in them.

"He sent me four beats, and I got inspired and wrote four things to them that week.

"There’s a line where I said ‘giving up on giving up the drinking’. There’s something liberating about that. Being in a space where alcohol doesn’t control you.

"Watching my pops go through what he has with alcohol, he’s got to a space now where I think he might be able to have one beer, and not… you know? And that’s tight. ‘Cause the week’s intense, and when it comes to Friday you do want to have a drink, you do want to let your hair down!

"So that’s my washed version of a party song. [laughs]

"‘I’m gonna have two beers this Friday! Really treat myself’."

"That’s a sample of Hiroshi Suzuki that we replayed and reinterpreted. He’s a jazz fusion artist from the seventies.

"We’d just had a good game of basketball down at Edinburgh Gardens and I just wrote a song about all the shots going in. It’s a cliché metaphor but you know, when you’re in that zone and everything’s working out? The only time I really experience things working out is via the basketball court. I’m not thinking about this shot, I feel like I didn’t even shoot it. I just thought it into existence.

"I never walk through life like ‘wow, things are really working out today'."

"Actually sometimes I do.

"And that just keeps making me feel like [life] might be a simulation. The levels have been adjusted. Luck has been turned up for my particular sim."

I know what you mean. But I resent those days, because it makes the other days look so much harder. Like you’re back on struggle street.

[Laughs] "Straight up bruv. But then maybe you need to set yourself on ten.

"And I feel like when you’re on a good thing you can keep on that. I refuse to get myself off this now. I’m really liking figuring this out a bit more. And I’m going to have to write another album soon so it’s going to be back to struggle street and I’ll be depresso expresso again. But for now I’m liking being in a good place and trying to control things a bit better." 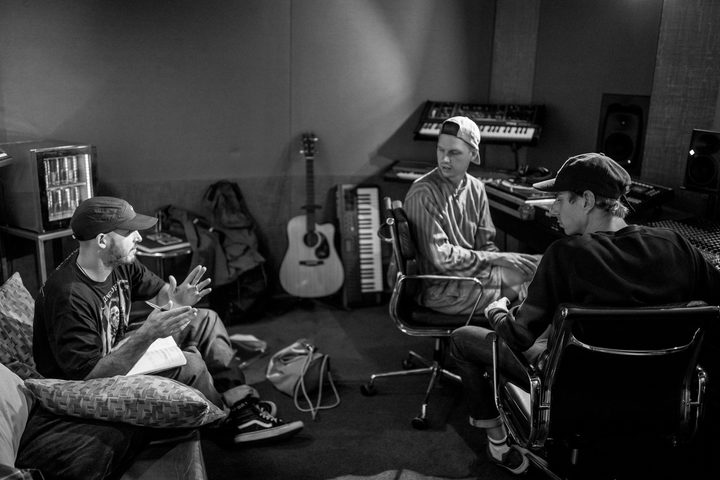 "I was in Melbourne, a city full of people I didn’t know, and that intimidated me.

"I just locked myself in my room, and I would look out on Smith Street and write about that. And that’s how songs like Home came to be. On that I say ‘there’s a dead fern on the windowsill’. I had these milk crates on the windowsill and I tried to make my little urban garden, and there was this one fern that was withered and dying and it was staring at me like the perfect metaphor, like ‘you don’t belong in this climate!’"

Is the Chico Hamilton sample those main chords? Did it encompass your feelings of homesickness?

"Yeah, that's the one. I actually wrote the original track to a Leon Ware song called This is why I came to California. Then as the album eventually developed into more of a jazz thing I needed something else as the bed. I had looped up that Chico track one day and tried the words from Home to it, then boom it made perfect sense. But yeah, you might be able to picture the first verse to this Leon Ware loop. Weird cause the lyrics in that song are kind of similar now that I listen."

Is your son Quincy named after Quincy Jones?

"Sort of. To be honest, naming my child was actually the least of my priorities at the time. We were stressing out more about trying to find a way to home him and feed him let alone a word to call him. HE made the name eventually. And that's always the way it is I guess. But more importantly than what the name signifies I like how it sounds like phonetically. It sounds like his personality." 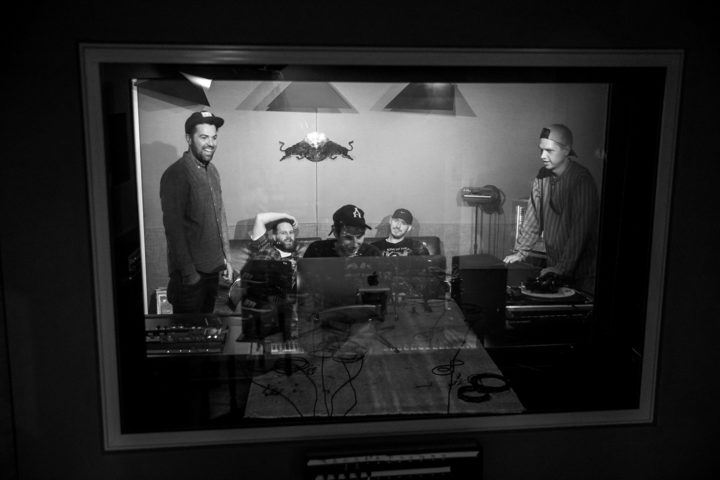 "That’s my favourite track. It’s the one I put together myself. I had words for it but I thought it was so much better to be left to interpretation.

"My aunty was a breast surgeon. She was the most highly esteemed breast surgeon in this hemisphere basically. She’d always be on the news talking about it.

"And then she got early onset dementia. And now she can’t put her jacket on. She can’t do anything.

"When I played it to my missus she’d just lost her nana. And I explained slightly what it was about, and by the end she was crying.

"It was cool to leave it to interpretation, ‘cause then it’s medicine for everyone."

This interview is a mix of in-person responses and emails.
Avantdale Bowling Club is out now.