The Beths scored a Silver Scroll nomination for their song ‘Future Me Hates Me’, the title track of an album which has earned them rave reviews at home and abroad. We visited the band at their Auckland studio.

Nestled among tattoo parlours and second-hand stores on Auckland’s Karangahape Rd, The Beths’ inner-city base of operations is hard to spot.

But once you head down a graffiti-lined hallway and some stairwells there it is: guitarist Jonathan Pearce’s studio space.

It’s a bit claustrophobic in there, particularly with four band members crammed in. When I comment on this bass player Ben Sinclair remarks, “It used to be a lot smaller. It was half that size till Jono knocked one of the walls out.”

Jonathan confirms: “It was always going to happen. One day I just got sick of it and got out the big crowbar.”

The Beths are, when you meet them, exactly what you’d expect. Friendly, relaxed, a bit shy.

Singer-guitarist Liz Stokes is mortified when I ask her, on camera, if their song ‘Little Death’ is about having sex.

“I like to think it goes without saying... I prefer not to say it... I’m fairly repressed” she manages between laughs. 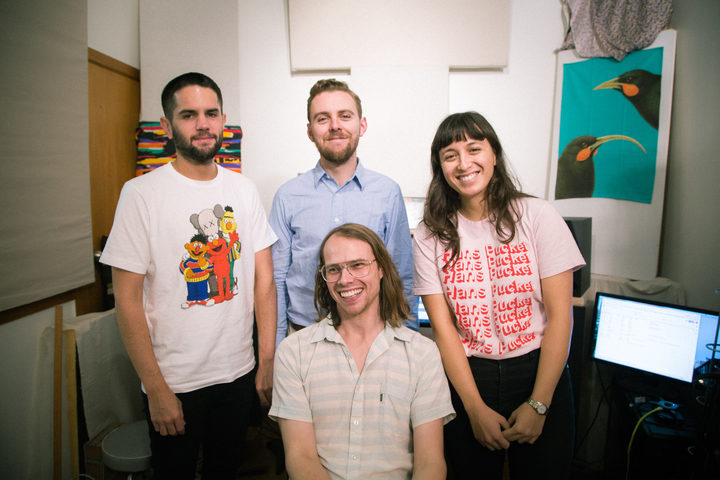 The Beths in their studio Photo: RNZ / Eddy Fifield

They’re a band that laughs a lot, which is also to be expected if you’ve heard their songs or seen their videos.

I ask Liz if it’s a deliberate balance: does she ever write something and think ‘this is way too earnest, I need to lighten it up’?

“I’ve done that a lot on this record”, she admits.

“The only projection from it is my own heavy sense of self-consciousness. If it gets to the point where I’m too self-conscious I have to do something about it.”

Signs of The Beths’ personality are everywhere in the studio: pictures of native birds cover the walls, alongside multiple cricket bats and a huge jug of vermouth (they brought back four litres from Spain).

The space has been a bit neglected lately, as the band have just returned from touring America. Jonathan beams as he says, “This was my first time throwing a microphone up in a while, and I had a really good time.”

The tour was just part of what’s been a huge year for The Beths.

They signed to American label Carpark Records, who released their debut album Future Me Hates Me, and are nominated for their first Silver Scroll for the song ‘Future Me Hates Me’, a typically well-crafted guitar-pop morsel.

Soon they’ll head back to America for more touring, before carrying on to the UK.

I ask the band if this is part of a grand plan from their record label. Liz shrugs off that idea.

“No. We had some big chats toward the end of last year about what we wanted to do with the record because it was nearly done. We decided we would tour it, and just making that decision was quite important. Carpark came about after that.

“I think making our intentions clear - showing that we were actually making this our priority - that might have helped.

“And now, it just makes sense. Now is not the time to sit back and relax and go ‘things are going pretty well’. It’s the time to work as hard as we can and try and get our music working outside New Zealand.”

The Carpark deal came about after Bevan Smith (who is signed to the label under his alias Introverted Dancefloor), passed on 'Future Me Hates Me' to label head Todd Hyman.

“It was unbeknownst to us,” Jonathan tells me. “We got an email from Todd a little while later, telling us he was going to take the album away over Christmas and see how it sat”.

Evidently, it sat pretty well. The album and its singles have gone on to reap glowing reviews from the likes of Rolling Stone, NPR and Pitchfork.

“There were a few days when we knew something was on the way from them, but we didn’t know what it was going to be. They’re the big entity, and they can really help you if they like you, but they can also knock you down if they don’t.”

Adds Jonathan, “it’s scary. It’s to be avoided until you’re ready for it.”

And The Beths are clearly ready.

All this interest in the band has led to that rite of passage for young musicians - quitting the day job.

For Jonathan, that means less time recording other artists (we’re in the space where he helped make albums for Wax Chattels, Anthonie Tonnon and the Naenae Express, among others), and performing (over the years he’s played with Aldous Harding, Artisan Guns, Astro Children, Watercolours; many more).

For Liz, it means saying goodbye to a gig teaching trumpet.

And Ben is taking a hiatus from teaching school kids saxophone. This familiarity with brass instruments is a clue: the band met studying jazz at Auckland Uni (Jonathan studied piano). And their training manifests another way: they’re all really good players.

“There are plenty of great bands that write great songs and are fascinating to watch live, who might not necessarily nail every sixteenth note in a pattern, say, but that is something that’s important to us,” says Jonathan.

Adds Liz, “there’s quite a strict arrangement in all the songs. There might be a small amount of room for unexpected things to happen, but everyone’s got a part. There’s no vagueness.

“It’s not like ‘this is kind of a strummy bit’, it’s like ‘I play sixteenth notes very strictly, then stomp my pedal at exactly this point.”

Ben chimes in “I feel like going to uni with these really hard out musicians, you have an expectation of what someone that’s good on your instrument should sound like.

“I couldn’t learn a hundred songs and nail them, but I could do it with ten”.

They all laugh. It’s easy to see, songs aside, why people are so fond of this easy-going band. But Liz points out that on 'Future Me Hates Me', she fought the impulse to make things too lighthearted.

“I’ve been pushing the limits of my own sincerity throughout this record”, she says.

“There’s a couple on there that I feel nervous about. But somebody at some point has said ‘this one is my favourite’ about most of the songs, including the more sincere ones.

“I think it’s ok to connect with more sincere people”. 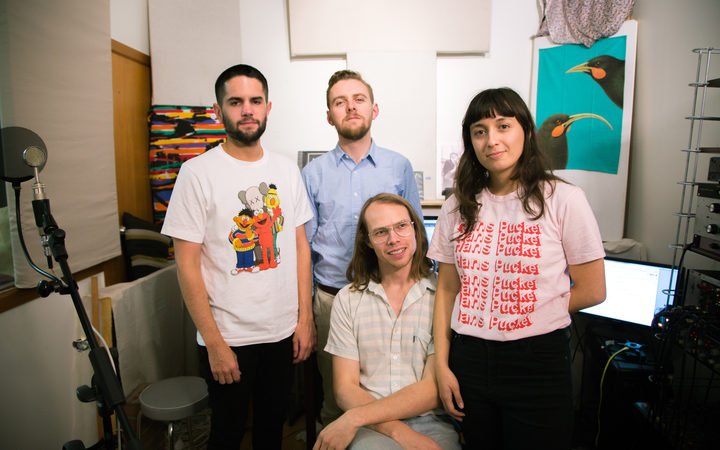 The Beths in their studio Photo: RNZ / Eddy Fifield