The long-running saga of the mega-merger of our two biggest news publishers is heading for the High Court - not for the first time. Last time round, NZME and Stuff were fighting for the right to get together. This time the pair are seriously estranged. 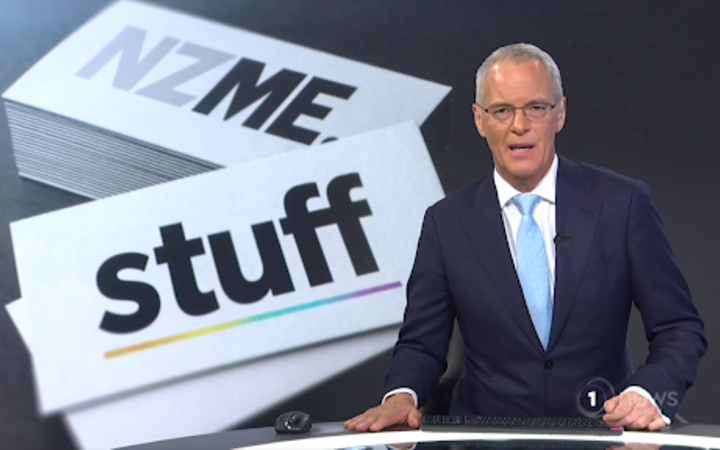 Media company NZME has applied to the High Court for an interim injunction against Nine Entertainment in Australia  - the owner of NZME’s main market rival Stuff.

It is seeking to enforce an exclusivity arrangement and prevent Nine from negotiating with any other possible buyer.

It’s the latest twist in what the NZME-owned New Zealand Herald called “an increasingly bitter process”to turn the two news publishers into one. Stuff's report said it had "turned septic."

And in an article published earlier in the day, Stuff’s political editor Luke Malpass was more colourful.

“The cack-handed attempt by indebted media octopus NZME to browbeat Nine Entertainment into selling it Stuff for $1 spectacularly blew up in its face,” he wrote.

“It is understood that Nine’s attitude is now that it will sell its Kiwi arm to anyone but NZME,” he wrote.

Nine has missed self-imposed deadlines to sell off Stuff this past year and, given its own Covid-driven problems, it will not want to offload Stuff for nothing if another buyer makes a better offer.

NZME’s latest move is a bid to stop that happening.

When the two companies first proposed a merger back in 2016, the two publishers were completely on the same page.

Their merger plan was prepared in strict secrecy and unveiled with co-ordinated statements to the stock exchange in New Zealand and Australia.

So how did it come to this?

After the competition watchdog declined to give permission for the merger in 2017, NZME and Stuff went to courts together  and lost - twice.

Since then, Stuff’s parent Fairfax Media in Australia has been acquired by Nine Entertainment, a major media company with digital, radio and TV assets more important to them than newspapers and online news in New Zealand.

NZME has continued to pursue the deal and secured the Deputy PM’s support for a modified merger late last year. A  ‘Kiwishare’ arrangement proposed a combined Stuff and NZME would ringfence newsrooms and local titles while merging the rest of their operations.

Last Monday NZME sprang a surprise with a statement to the NZX which said NZME and Nine Entertainment  in Australia agreed an exclusive negotiation period on 23 April to acquire Stuff for the nominal sum of $1.

NZME needed government support to unblock the Commerce Commission’s opposition to the merger by the end of this month.

NZME said savings from combining business operations would support “the future of New Zealand journalism by a local, committed national news media outlet,” it said, and “NZME... is best placed to preserve mastheads, newsrooms and jobs.”

To that end, NZME requested the Commission consider its application under urgency, citing the collapse of Bauer Media in March which spelled the end for many magazines.

"We are mindful of what happened to Bauer Media and we are focused on saving hundreds of jobs and regional mastheads which may be lost if we do not act with this urgency. Time is of the essence and we seek your urgent assistance to allow completion by 31 May 2020."

But soon after, Nine told the ASX last Monday it had “terminated further engagement with NZME.”

Meanwhile Stuff staff here were scratching their heads on the sidelines - including the top brass.

“We are really not sure why NZME took this step, given the clear message from our owners that there would be no transaction,” Stuff chief executive Sinead Boucher told staff. 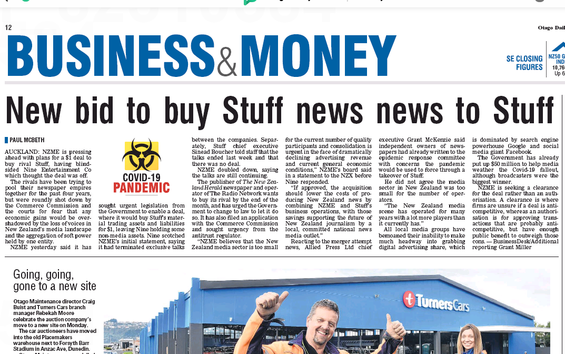 A jarring - but clever - headline from the ODT. Photo: RNZ Mediawatch

When asked if the two companies were communicating over this apparent impasse, NZME’s spokesman told Mediawatch they will have “more to say at some point.”

NZME’s move is also about pressuring the government.

Unveiling a $50m targeted assistance package for media released in late April, broadcasting and digital media minister Kris Faafoi said there was “a natural level of function of journalism the Government wants to see.”

“Media plurality, the function of journalism and preserving as many jobs as possible are the priorities", he told reporters.

News publishers didn't benefit much from the package - or from Budget 2020. Around 450 journalists have lost their jobs since late March - among them many at NZME.

A hearing on the interim injunction is set down for tomorrow at the Auckland High Court.

NZME's annual shareholders' meeting - to be held online on 11 June -  will also be interesting.