We're off to New Plymouth to talk about a waka that's sailed thousands of kilometres, with a cargo of more than one tonne of cocoa beans. The Waka Uto ni Yalo arrrived in Port Taranaki yesterday after leaving Bougainville four months ago. And there are plans to turn its cargo into twelve thousand chocolate bars. Radio New Zealand's regional reporter, Robin Martin, is at Port Taranaki.

It's taken 82 years, but today, the remains of Samuel Lakey have finally been put to rest at Huntly Cemetery. Samuel and his wife Christobel were murdered by their neighbour in the 1930's. And up until now, his remains have been stored in a back-room police museum collection. Rowan Carroll is the director fo the New Zealand Police Museum. And she's been at the service at Huntly Cemetery this morning.

Star Wars fans are eagerly awaiting the release of The Force Awakens trailer this afternoon. Lucasfilm released the poster yesterday as part of the countdown to the release. And it's gained some criticism. Star Wars fanatic, Olly Gibbs, is a London-bassed designer and illustrator. He's reworked the poster, claiming on Twitter that's he's improved the poster by ten thousand per cent. We caught up with Olly earlier to find out what he thought was wrong with it. He says the poster is missing the character Jar Jar Binks, so he added him.

Rob Maetzig is the motoring specialist for Fairfax, and he's come up with a list of some of the most unfotunate names for cars. So, we've invited him on the programme to share what he thinks, are some of the most humorous marketing gaffes.

T-shirt fans are invited to a major get-together in Wellington at the end of the month.
ShirtStock is advertised as a grassroots community event designed to give up and coming designers a chance to get their tee-shirt designs an audience. Thomas Lynch is the founder and main organiser. 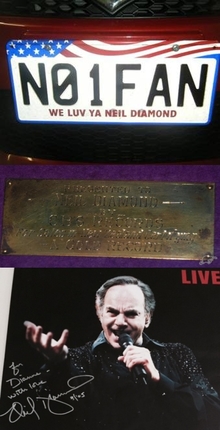 American singer Neil Diamond is currently touring New Zealand. He performed last night at Vector in Auckland. It's not the first time he's come to New Zealand. The first time was in 1976 when he played at Western Springs in Auckland and Queen Elizabeth II park in Christchurch.

North Korean defector Yeonmi Park never thought she could tell anyone her story. It is the story of a 13-year-old girl who escapes hunger and the brutal dictatorship of Kim Jong Un only to be sold to human traffickers in China for $260. It's the story of a North Korean girl and her mother who escape again, this time across the frozen Gobi desert into Mongolia to finally find true freedom in South Korea. Yeonmi Park never thought she could relive the horrors she witnessed but now as an activist, she wants to shine a light on the darkest place in the world. She writes about her ordeal in her book, In Order to Live: A North Korean Girl's Journey to Freedom.

Cilla Wehi from Landcare Research shows Alison Ballance some kuri or Maori dog skins at Otago Museum, and tells her she is analysing hair from kuri skins and cloaks, as well as kuri bones, to find out what the dogs were eating and whether poor diet might have been a factor in their extinction.  Stories from Our Changing World.

What the world is talking about, with Paul Brennan, Jim Mora and Zoe George.