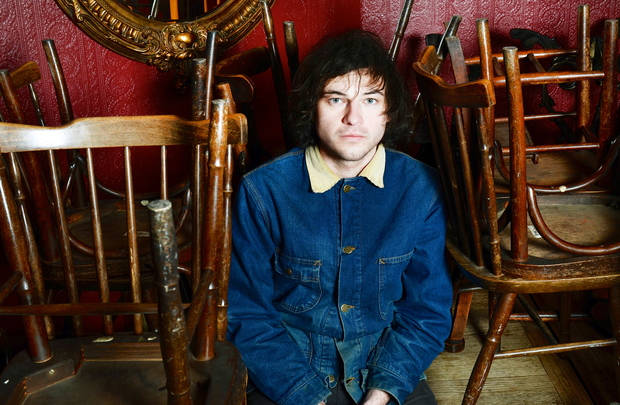 Ryley Walker can really use his hands.

Listen to the Chicago based musician’s latest album and you’ll find an intense and intricate finger-picked guitar style, harking back to a school of experimental players that emerged from Britain in the 1960s: Nick Drake, John Martyn, John Renbourn, Davy Graham.

Walker happily admits to the influence of such pioneers.

“Their music was rooted in traditional English, American, Eastern music – world music, what have you,” he says. “It’s still forward thinking and innovative and progressive, you know. Much as they dug into the past, those people were really mystic and futuristic, and got really far out.”

Walker tours incessantly, playing around 250 shows a year all over the world. As a working musician it is the only way to survive. He says he finds larger and more appreciative audiences in Europe than at home in the U.S., where he believes he is classed as “bottom-of-the-totem-pole indie-rock. I always feel like I’m the dumbest one at the party here.”

By contrast, his records have received glowing reviews in European music magazines. Walker released the first of these in 2014 for the independent Tompkins Square label, after which he moved to the larger indie Dead Oceans, for which he has made a further three albums. The latest one expands on his progressive fusion of jazz and folk, with his voice starting to match the dexterity of his guitar playing. The album was produced by fellow Chicagoan Leroy Bach from the band Wilco.

Its title Golden Sings That Have Been Sung is striking for, among other things, its incorrect syntax. What is the title’s significance to Walker?

“It can mean a lot of things, but the thing I like to think about is when you travel to another part of the world, you find yourself speaking English simplified - like ‘Beer one’ or ‘Where train?’ You use your hands a lot. You really go back to your primitive roots and use your hands.”