The 1969 film Easy Rider was a landmark counterculture film starring Jack Nicholson, Peter Fonda and Dennis Hopper. Not only was the film hugely popular, its soundtrack was groundbreaking, featuring pop and rock music instead of a traditional classical score, and thereby changing the film soundtrack forever. 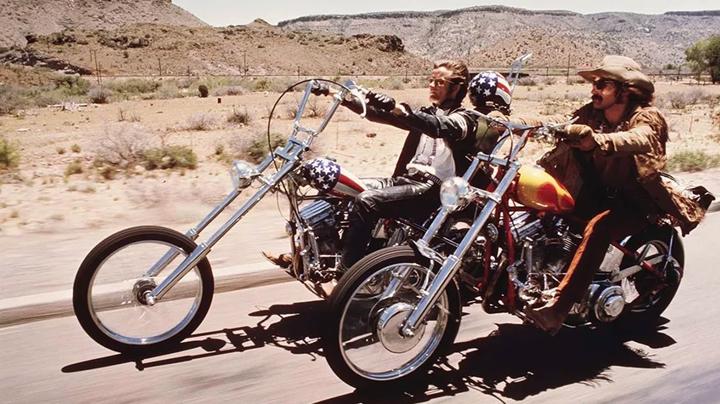 Back in 1969, it was very rare to see accurate portrayals of young people in film.

Easy Rider's director Dennis Hopper said at the time, "At every love-in across the country young people were smoking grass and dropping acid, while back home audiences were watching Doris Day and Rock Hudson."

Young people had also never heard the music they loved – rock music – featured in a film soundtrack. Hollywood soundtracks up until then had featured scores, often orchestral, written specifically for films.

Easy Rider changed all that.

It featured tracks from popular acts including The Band, Jimi Hendrix, Steppenwolf, The Byrds, Roger McGuinn, and the Electric Prunes, as well as giving one-hit-wonder status to a couple of bands who'd never have broken through without their inclusion in the movie.

But how did the Easy Rider soundtrack come together?

It started in the edit suite, almost by accident – Fonda and Hopper used music they'd heard on the radio, and from their own record collections to make watching hours of bike footage more interesting.

Enter Crosby, Stills and Nash. They'd been hired to write an original score for the film, but when they saw the rough cut, which included the tracks chosen by Fonda and Hopper, they decided they couldn't beat it.

Easy Rider was the fourth highest-grossing American movie of 1969 and was the beginning of a power shift from the Hollywood old guard to a group of new independent producers.

The film was made on a budget of under a half a million non-studio dollars, most of which came from Peter Fonda's Diners Club credit card. It grossed over 19 million dollars.

The film's huge success led to its soundtrack being released. The songs were sequenced in the same order as they appeared in the film.

The result was a commercial bonanza. Easy Rider was everywhere.

Easy Rider was a profit-making movie that hit 60s counterculture with a shock of recognition. With it, the rock soundtrack album came of age and gave the music industry an additional income stream: synchronization.

And these days, that's what it's all about, man.

Music details for the audio version of this story:

Song :  When The Saints Go Marching In
Artist:   annon

Song:  If Six Was Nine
Artist:  The Jimi Hendrix Experience

Song:  If You Want to Be A Bird
Artist:  Holy Modal Rounders