If you have previously been able to listen but are currently experiencing problems, check our Scheduled Transmission Outages page which lists planned transmitter maintenance work.

Are you close enough to a transmitter?

The further you are from a transmitter, the weaker the AM signal will be. Signals can travel long distances, but obstructions such as hills or tall buildings will cause the signal to lose strength more quickly.

You may find that the signal is not as good at night. This is due to differences in the atmosphere.

Electrical interference from sources such as electric fences, televisions, computers or street lights can cause crackling. Try switching off other appliances in your house to see whether the signal improves.

Most AM reception problems can be improved by using an aerial.

AM aerials are directional, so to get the best reception, try changing its position. Most portable radios have a built-in AM aerial, so you may need to change the position of the radio to find the best direction.

Handheld devices may use the wire of the headphones as the aerial, so make sure that the wire is fully extended.

In areas of poor reception, you may need to connect your radio to an outside aerial. An outside aerial can be very useful when the reception of distant stations is required, especially in rural areas.

The reception of AM broadcasts on portable transistor radios may be improved by the use of a tuned loop aerial. The aerial consists of two parts:

The value of the tuning capacitor is 350 picofarad (350pf). It is the type that would he used in a crystal set and may be purchased at most shops selling radio components. The number of turns of wire and the diameter of the inductor as shown are matched to this value of capacitor. The loop aerial is very directional. It should be mounted vertically with the edge of the loop pointed towards the station to be received. The transistor radio is placed inside or beside the loop aerial at a right angle to the loop.

Parts for diagram below 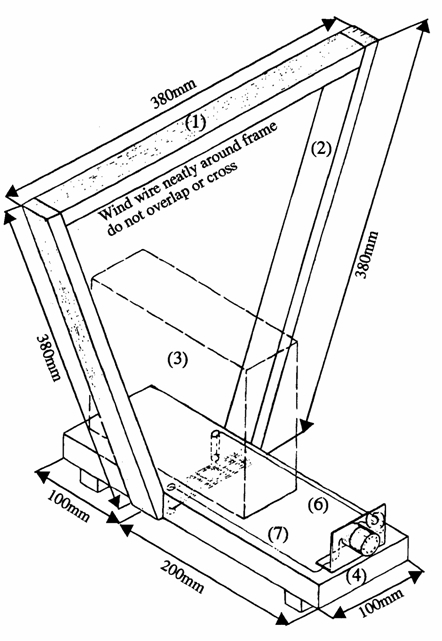 Tune the radio to the desired station and move the radio around and about the loop aerial to obtain the best results.

Radio receivers are sensitive to radio waves present all around us. Putting up an aerial of any sort helps collect these waves and feeds them into a coil in your radio receiver.

Depending on the type of radio receiver you have, the earth connection is important too.

Some AM receivers are provided with terminals, which allow an outside aerial to be connected to the receiver. An outside aerial can he very useful when the reception of distant stations is required, especially in rural areas. Two types of outdoor aerial suitable for AM reception are the 'Inverted L' and the 'Whip'.