A refugee formerly detained on Papua New Guinea's Manus Island, who's now locked up in an Australian hotel, has recorded a song with the help of Midnight Oil's Jim Moginie. 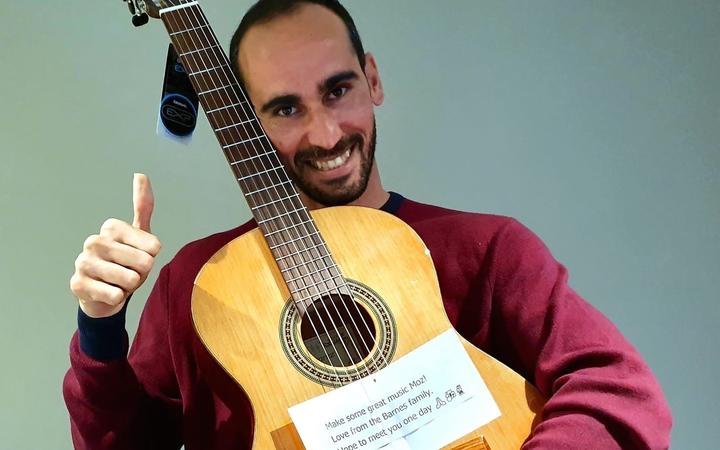 Moz with the guitar given to him by Jimmy Barnes. Photo: Mostafa Azimitabar

'Love,' composed by Mostafa 'Moz' Azimitabar on a guitar given to him by Cold Chisel's Jimmy Barnes, was produced and mixed by Moginie.

The Kurdish refugee previously released songs from the notorious detention centre on Manus, where he was imprisoned in 2013 for seeking asylum in Australia.

'All The Same,' recorded in 2017, was produced by Emma O'Brien, a member of the Order of Australia, and 'The Birds,' released in 2018, is a collaboration with New Zealand artist Ruth Mundy.

A musical diversion, however, could not prevent Moz from developing health problems, like hundreds of refugees detained indefinitely on Manus and Nauru. He was transferred to Australia for medical treatment in late 2019.

In Melbourne, Moz was detained with about 65 other medical transferees at the Mantra hotel; its third floor designated an Alternative Place of Detention (APOD).

While at the Mantra, Moz was gifted the guitar and sought permission to visit Moginie's nearby studio.

"Many times I asked ABF (Australian Border Force) and Serco managers to take me to my friend's studio that is a few minutes away from the Mantra hotel but they rejected my offer," Moz said.

The refugee enlisted the support of Darebin City Mayor Susan Rennie who, in a letter sighted by RNZ Pacific, offered to act as a "guarantor" for the studio visit.

I'm so proud of this man. Moz has been locked up indefinitely in the Mantra Hotel in Melbourne with 65 other refugees. If you think lockdown is bad, think of being locked up for 6 1/2 years on Manus Island and then here when there was no crime. https://t.co/KvpAeQlGku

"As a Darebin resident, we would also like to offer Mr Azimitabar use of the council operated 'Decibels' studio located in Reservoir and would be very happy to work with the ABF to facilitate Mr Azimitabar's access to the studio," Ms Rennie said.

But in its 11 March response to Moz, the ABF noted that, "the Department of Home Affairs does not approve offsite excursions for detainees unless there are compelling circumstances".

"ABF therefore will not be approving your request to attend a recording studio or any other 'social' excursion at this time."

"That is why I decided to record my demos with my phone," Moz explained. "Because I didn't have any better options."

But even that option could soon be taken away. The Australian government has introduced legislation that would give it the power to confiscate mobile phones from the roughly 1400 people it holds in immigration detention.

The law would override a Federal Court ruling of 2018 that enabled asylum seekers to keep their phones, allowing them to stay in touch with their families and to provide insights into Australia's immigration detention regime.

The government has been criticized for introducing the bill during the Covid-19 pandemic, which prompted medical experts to call for the release of immigration detentainees to protect them from the virus.

Moz and other refugees mounted a daily protest, demanding to be placed in the community. 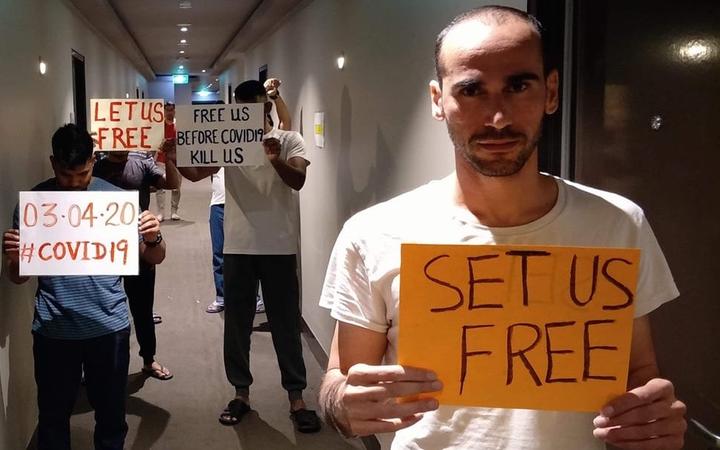 "Everyone here is sick mentally and physically and we need proper medication. I have been through many difficulties but I haven't seen any torture like this," Moz said.

"This is not a hotel. It's like a torture centre. We have been deprived of sunlight, there's no place for walking here and our bodies are getting weaker day by day.

"We were transferred to Australia for medical help but instead they are punishing us. We are hostages in the hands of the Australian government."

Protests also sprung up outside the APODs, where activists were fined for breaching pandemic restrictions to demonstrate.

Moz has dedicated his new song the activists and those opposing offshore detention.

"I've written Love for those who care for us, those who respect us, those who believe that we are all the same. I dedicate this song to all the amazing people who are standing up for us and fighting for our freedom."

With his demos recorded in his room, Moz sent the music to Moginie.

"He is such a wonderful human being. When I sent the song to him he really loved it and said, 'it's very catchy but not like the virus'."