Warning: This story discusses suicide and contains details that may upset some people.

A former Manus Island refugee detained in an Australian hotel attempted suicide on Tuesday as police apprehended Australians protesting on the building's roof. 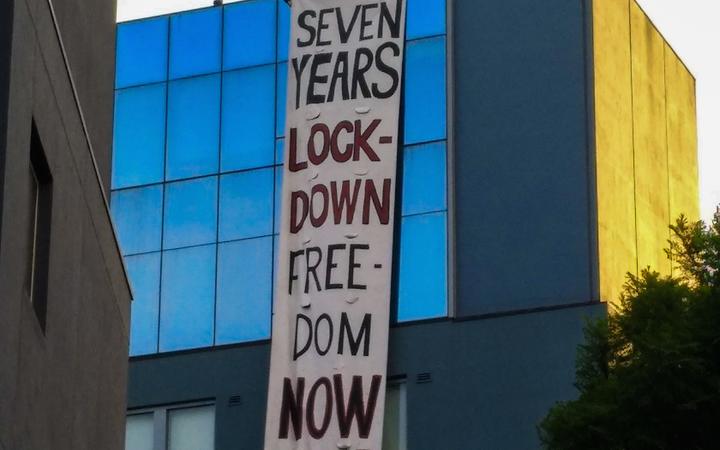 One of the banners unfurled by protesters at the Mantra Hotel in Melbourne. Photo: Whistleblowers, Activists & Citizens Alliance

It is not thought the two incidents are connected.

The refugee had previously attempted suicide in Papua New Guinea and was transferred to Australia for mental health treatment last August.

He is one of about 200 men formerly detained offshore who are now locked up in Australian hotels being used as alternative places of detention.

Most have been there for more than six months after six years of detention without trial on Manus and Nauru.

All were transferred for medical treatment of conditions arising during their indefinite incarceration. Many claim they are yet to receive healthcare.

As paramedics rushed the refugee to hospital, police apprehended eight activists who had barricaded themselves into rooms of the Melbourne hotel and occupied its rooftop.

They had unfurled large banners calling for the release of the refugees, including about 400 still in PNG and Nauru

Medical experts, who fear outbreaks of Covid-19 in detention centres, have also called for the refugees' release.

Their public health warning was echoed in a statement from protest spokesperson Sam Castro.

"The Australian Government owes us all an explanation. Why are 200 refugees brought over under Medevac legislation denied medical care and fresh air?

"Why are such vulnerable people being held under unsafe conditions during the Covid-19 crisis? How long will the Australian Government continue to indefinitely detain and torture people fleeing persecution and conflict?"

The Age reported the protesters were escorted from the building by police and fined $AU1650 each for breaking social distancing rules.

The refugee is understood to be in a stable condition.