Two bodies have been recovered from the sea near Malaita in Solomon Islands as the search continues for 27 people who were swept overboard from an inter-island ferry that appears to have defied warnings.

The MV Taimareho set sail from the capital, Honiara, bound for Malaita late on Thursday night, laden with more than 700 passengers and cargo. 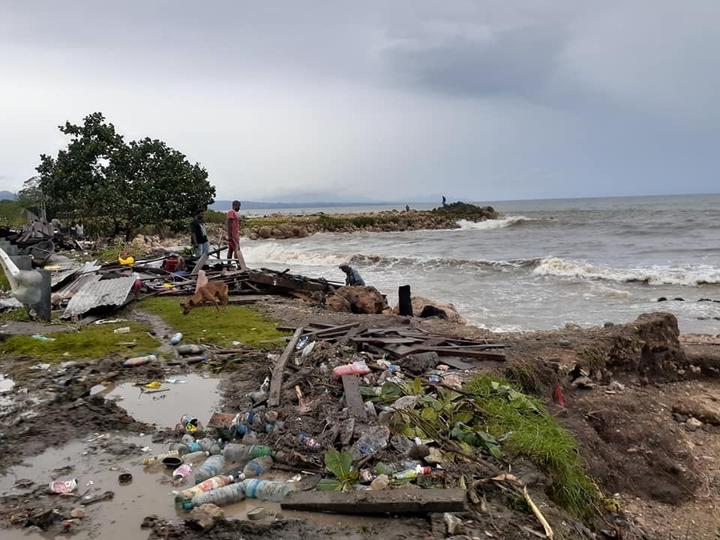 It set sail in strong winds that were buffeting Honiara Harbour, with Cyclone Harold - then a category two storm - just to the south.

It also set sail despite weather warnings which had been issued and broadcast via harbour authorities, urging ships to not set sail because of the cyclone, which had whipped up treacherous seas.

"A cyclone warning was sent out," said Brian Aonima, from the Solomon Islands Maritime Rescue Coordination Centre. "Also, our Port Authority announced that all ships tonight should not move."

In the past week, there has been a mass exodus from the densely populated capital, Honiara, after prime minister Manasseh Sogavare announced that the country would go into lockdown because of the coronavirus pandemic.

In his address to the nation, Mr Sogavare urged people in Honiara with nothing to do to return to their home villages. For thousands, that set off a race for home, with many members of parliament chartering ships to return constituents.

But that race was hampered with the arrival of Cyclone Harold, which cut off many roads and caused widespread flooding. On Thursday night, with the storm just to the south of Guadalcanal, authorities urged ships to remain in port to wait out of the storm.

"The only ship that made it out from here [on Thursday] was the Taimareho," Mr Aonima said. "That's where she made the tragic accident outside of Guadalcanal."

Mr Aonima stressed much about the incident remained unknown, with authorities still waiting for the ship and its captain to return to Honiara.

But some time in the early hours of Friday morning, as the Taimareho fought its way across the narrow strait between Guadalcanal and Malaita, a huge wafe buffeted the ship, sweeping several people overboard.

In the initial panic, reports of the number of people swept overboard varied wildly, with the ship's captain initially saying it was as low as three, but other reports from relatives indicating it was in the dozens.

On Sunday, Mr Aonima confirmed that 27 people were missing, including a 13-year-old boy, a number which was reached by comparing a count of the disembarking passengers in Malaita with the ship's log that was filled in on departure.

For much of this weekend, patrol boats and planes fought rough seas, strong winds and minimal visibility to conduct a search for the missing. On Saturday, Mr Aonima said nothing had been found.

For much of Sunday, when visibility improved as the cyclone moved away, it looked like nothing would be found again, as planes and boats scoured a search area of more than 1,000 square kilometres.

But then, some police officers canvassing the southern coast of Malaita saw two bodies floating in the ocean. A helicopter was deployed, and they were plucked from the surf.

Mr Aonima said that discovery had galvanised the search, and they were now zeroing in on the same area.

"The current is flowing towards South Malaita, so we are focussing on that area," he said.

The prime minister, Manasseh Sogavare, released a statement, saying he was saddened to hear of the "tragic incident."

"It is my deep regret to learn that a number of passengers are missing at sea after being washed overboard from a passenger vessel which departed from Honiara despite several weather warnings issued," Mr Sogavare said.

But Friday's tragedy is just the latest in a string of maritime incidents prompted by captains pushing ahead in poor weather. The police have issued repeated warnings after people died while attempting to island-hop during storms.

And a year ago, a ship chartered by a mining company was washed aground as it tried to load bauxite near a world heritage area in Rennell, setting off one of the country's biggest environmental disasters.

Mr Aonima said an investigation into this latest maritime incident has begun.