An environmental disaster is unfolding in Solomon Islands, on the island of Rennell, with tonnes of oil spilling into an internationally-significant marine reserve. 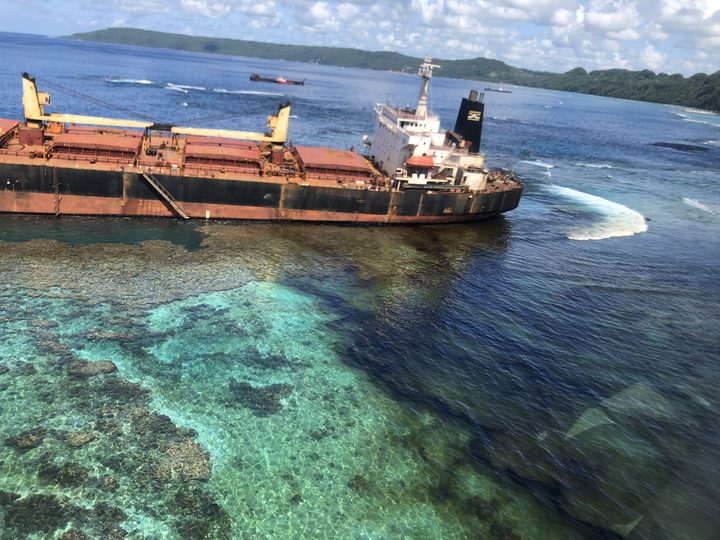 In Kangava Bay, the azure waters have been blackened by oil, the reef thick with sludge. Metres away, where the rich rainforest barrels down to the coast, the white sand gets coated by a heavy goop with each wave that rolls in. The air is thick with the stench of heavy chemicals, residents say.

Each day for the past three weeks, locals have looked out to a giant ship, the MV Solomon Trader, as it sits wedged on a reef, a gash on its side leaking as much as 60 tonnes of oil into a marine sanctuary.

The spill is still not contained, and experts have scrambled from as far away as Australia and the United States to try and stem the flow in what authorities now say could be the Solomon Islands' worst environmental disaster.

As the Solomon Islands government confirmed it cannot cope with the scale of the leak, containment supplies are being flown from Australia.

Efforts to refloat the ship, chartered by bauxite miner Bintan Mining Corporation, have been hampered by poor weather and Rennell's remoteness.

Meanwhile, the spill could taint a Unesco world heritage area already threatened by climate change, mining and logging. And for locals, it's poisoning their food sources and livelihoods.

Willie Kaitu'u, who hails from the Tehakatu'u tribe in Kangava Bay, said the beaches were covered with oil, the air was pungent, and fishing grounds that his people have long relied on ruined.

"There's very black oil that's spread everywhere," he said via a crackly cellphone. "The oil has started to go over and cover the beaches and also the deep sea. It's covered the protected area. There's a clear sign of worry," he said.

The Hong Kong-flagged Solomon Trader had arrived in Rennell from the Chinese port city of Longkou to collect a load of bauxite, the main ore used in the production of aluminium, when it was washed onto the reef by Cyclone Oma, according to the ship's owners.

Since 4 February, it's sat where it was grounded. Cyclone Oma lingered for more than a week, stirring heavy swells and preventing tugboats from attempting to salvage the ship, from where it's proved stubborn to remove. 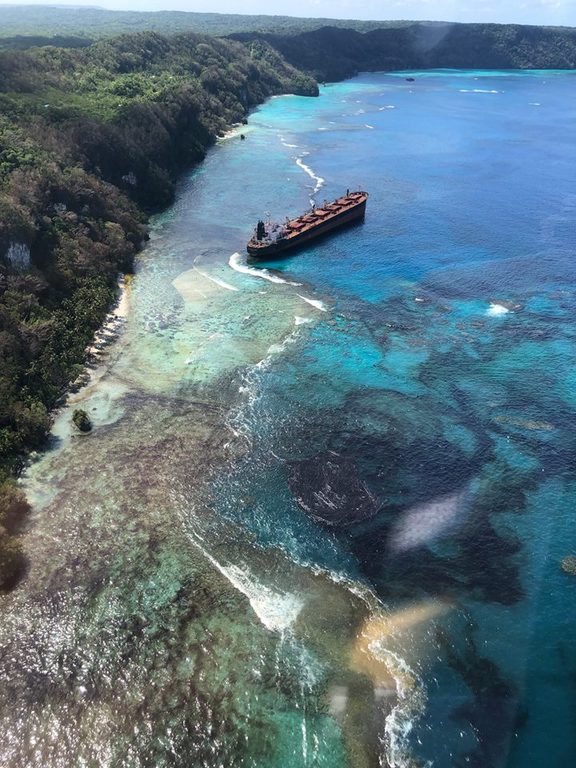 The reef it sits on is part of a World Heritage Area, recognised by the United Nations as a global site of ecological significance that's already under threat. Rennell is the largest raised coral atoll in the world, and contains diverse and unmodified forests, coral and species.

In a statement, Unesco said it was concerned about the spill and was "working with the national authorities to ascertain the status of the situation and the best mitigation measures to be taken".

But it could still get worse, according to the premier of Rennell and Bellona province, Colin Singamoana.

Initial reports by the Australian experts suggested about 60 tonnes of oil had already leaked from the ship. But more than 600 tonnes remained on board. The reef had been acting as a sort of plug, Mr Singamoana said, and if the ship shifted, the remaining oil could be unleashed much more quickly.

Mr Singamoana said the currents had already started spreading oil down much of the Rennell coast, and he warned it could reach as far as the neighbouring island, Bellona.

"The content of the oil on board is highly poisonous," Mr Singamoana said. "We use the sea for most of our support, especially in terms of food."

A member of the Rennell community in the capital Honiara, Derek Pongi, said his relatives had told him that the oil had already poisoned their fishing grounds.

"The people rely on the sea but now it's all contaminated and polluted," he said. "Things are not looking good for my people."

Mr Pongi said people were growing increasingly frustrated with the pace of the response, and that anger was mounting particularly towards the bauxite miner, Bintan Mining Corporation (BMC).

Many are asking why the company was loading bauxite when there were cyclone warnings for the entire country, and how there were so few safeguards in place in a world heritage area.

The Solomon Islands government has described the spill as an emergency and has committed several agencies to the response. But word from Honiara has been muted, and disaster officials have said it doesn't have the capacity to cope.

It's activated an agreement with Australia that has seen its Maritime Safety Authority committed to the response, and experts and equipment were deployed on a special military flight late last week. The Australian High Commission, in a statement, said it was exploring all options to contain the spill.

The ship's owners, Hong Kong-based King Trader Ltd, said it had also sent a team to help with the salvage operations and was doing everything it could.

But the bauxite miner, BMC, had a different response through its parent company. It published statements in local newspapers seeking to absolve itself of responsibility, critics claim, pushing it onto King Trader Ltd.

"BMC, as the voyage charterer, have no legal responsibility … for the ship," the statement read. "BMC is just using the ship to carry its good from the point of loading to the point of discharge."

"In the case of Solomon Trader, BMC as charterers of the ship, have no liability for this incident," it said, adding that the outlook for a successful operation was promising.

That position met with frustration from Premier Singamoana.

"To me I think the responsibility really in regard to that issue is the mining company."

Mr Singamoana said he planned to seek advice from the attorney general, while the Australian High Commissioner, Roderick Brazier, said Australia would help the Solomon Islands government to hold the company, owners and insurers to account for the damage.

Meanwhile, oil's still leaking, and Mr Kaitu'u said the people of Kangava Bay were fearful about their food sources, their income and their environment.